Who was Willard Legrand Bundy?

Willard Legrand Bundy was a prolific New York inventor, who obtained patents for many mechanical devices. He registered his first patent in 1880 for a calendar-clock movement (US patent Nr. 225968). He also held multiple patents for cash registers (see electric-cash register of Bundy), and calculating machines. However, the invention which made him famous, was his time recorder, a mechanical device that recorded when workers clocked in and out of work.

His family relocated to Auburn, Cayuga County, New York, in 1849. After relocating to Auburn, he joined the feed and flour business and later started his restaurant. When the war began, Willard Douglas Bundy ventured into the grocery business which took him seven years to establish. Later, he started fishing, general provision, and an oyster business and had a great passion for construction.

Willard Legrand Bundy studied at Auburn. He learned about trading while working at a jewelry store. In 1868, he had already gained experience and started his own jewelry shop.

In 1871, he decided to start a new chapter in his life. He was married to Esther Decatur “Etta” Sweet (born on October 12, 1851, and died on September 10, 1931). Esther Decatur was the loving daughter of Royal D. Sweet, who was from Manlius, Onondaga County, New York.

In the 1880s, Willard Bundy built the Thousand Year Clock. A wonderfully designed 3100-piece clock. The focus of this clock was to entertain and draw the attention of customers shopping at his jewelry shop. This clock was later moved to the Cayuga Museum in Auburn.

On January 19, 1907, Willard Legrand died in Syracuse, New York, after suffering from Pneumonia. He was buried in Oakwood Cemetery. Even after his death, Willard Legrand Bundy’s inventions continued to impact different workplaces. His concept of using a device to clock in and out is still used by other businesses globally.

Willard Legrand Bundy had established his profile as an inventor. In 1880, he registered his first patent, a calendar-clock movement. He also had many other patents for calculating machines and cash registers, like the electric cash register. The time recorder was his invention that made him famous. This was a mechanical device used to keep track of workers’ times they clocked in and out of jobs.

Harlow Elisha, his younger brother, who was also business-minded, encouraged Willard Legrand Bundy to start a business with him. On September 30, 1889, they established the Bundy Manufacturing Recording Company, Binghamton, together. This company was to manufacture Willard’s Workman’s Time Recorder invention.

The Bundy Manufacturing Company started its journey with a capital of $150,000 and only eight employees. However, soon George Winthrop Fairchild and Austin Ward Ford started investing small capital in this company. Harlow was then appointed general manager, while his brother, Willard Legrand Bundy, worked as a superintendent and managed the technical part.

Within a short period, the company grew rapidly and became one of the major industries and most successful in Binghamton. In the late 1890s, they had more than 140 highly skilled employees on their payroll and started different offices in the principal cities within United States.

By 1898, Bundy Manufacturing Company had already manufactured about 9000-time recorders. The Bundy Time Recorder was advertised as a means of solving “some of the vexatious questions used to keep track of the employees’ time”.

The general manager of this company, Harlow, created different accounts with the United States post office and the Western Railroad, Delaware, and Lackawanna. With the Bundy Time Recorder, Businesses could now keep track of their employees with their time clock, thus establishing an international revolution.

Bundy Manufacturing Company decided to merge with other companies dealing with time records in 1900, resulting in the International Time Recorder Company (ITR). ITR later, in 1911, merged with another company, Tabulating Machine Co., Hollerith. This New York incorporation formed the Computing-Tabulating-Recording Company, a forerunner of the International Business Machines Corporation, one of the world’s most famous.

In 1900, there was tension started brewing between Willard Legrand Bundy and his brother Harlow.

This was caused after Harlow dismissed Willard Legrand’s elder son (Willard H.) from the company due to some undisclosed circumstances. After his dismissal, Willard H. registered a new patent for a contemporary designed time recorder and started a competing company.

He claimed that he didn’t break any of the agreements and was innocent. According to one of the local newspapers, Willard Legrand expected to have his salary until the signed contract with the Bundy Company. This meant that he had to take the next step and collect it from the court.

In 1903, he decided to cut off his connection with the Bundy Company. Together with their families, they relocated to Syracuse, New York. They immediately started producing for the Bundy Time Recording Company, which later changed its name to the W. H. Bundy Recording Company. The company’s success began immediately, soon it expanded and ventured beyond manufacturing time recorders. It started producing and marketing a new product in 1904 (the automatic calculating machine). By 1906, it formed the Columbia Calculating Machine and immediately started production.

This device was designed to perform tasks like multiplication, addition, subtraction, and other functions like printing words according to the requirements of an individual. In 1906, this company enlarged, and it rapidly increased to 500,000 USD in capital stock. It started opening different branches in other cities. One local newspaper stated that Syracuse manufactured half of the time recorders in the world. It also acknowledged W. H. Bundy Recording Company among the manufacturers in the Syracuse area.

The Bundy Manufacturing Company continued to sue W. H. Bundy Recording Company. From the years 1903 to 1907, the two brothers and their companies faced endless battles against each other due to the patent rights involving Bundy Time Recorders, the manufacturing and selling of the Time Recording Clocks using the Bundy name, and Willard Legrand Bundy’s violation of the original company contract. W. H. Recording Company was found guilty of patent infringement in 1907, but it continued to operate until 1915, when it refused to be bought out by its rival. 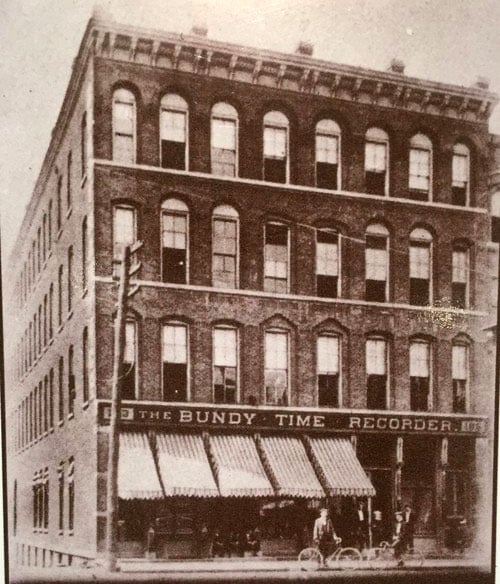 The Bundy Manufacturing Company’s factory on 183-185 Water Street in downtown Binghamton, New York, at the end of 19th century

What did Willard Legrand Bundy invent?

There is no information available about Willard Legrand’s net worth.

Willard Legrand died while he was still married.

Who was Willard Legrand Bundy?

What did Willard Legrand Bundy do?

Why did Willard Legrand Bundy build the mechanical time clock?

He invented this device to draw attention and entertain his customers at his jewellery shop.

When was Willard Legrand Bundy born?

When did Willard Legrand die?