The first two patents of Jacob Schnarrenberger are for multi-column keyboard adding machines, as the second was an improvement upon the first (see the lower patent drawing from US391430), similar to the machine of William Burroughs

In a January 1890 article of the newspaper Macon Beacon, (Macon, Miss.), the first calculating machine of Schnarrenberger was described as …a wonderful mechanical calculator… which performs addition, subtraction, multiplication and division, not only in whole and decimal fractions, but also in common fractions. The machine is twelve inches in length, eight inches in width and seven inches high, and weights but eight pounds. It is made of rubber and steel. The inventor claims that it is the first and only machine ever invented which will perform multiplication, division or square root by simple operation of keys. Addition is performed by touching a key bearing the number to be added, and standing in the proper column to order all the columns being added at one time… 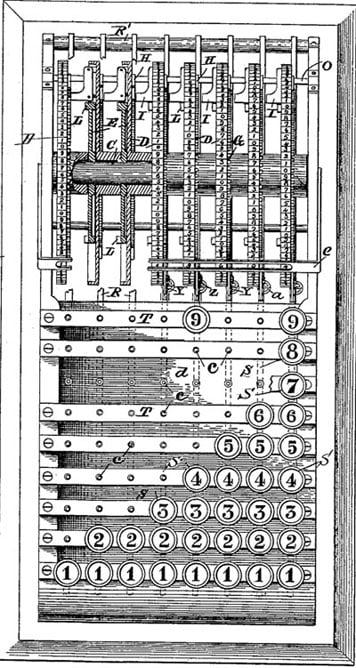 Let’s give an example of the operation of the device, in which $101.04 are to be added to $95.00. The operator would strike key marked 4 at the extreme right hand, which would present 4 the slot of the sight plate by moving the disk from 0 through four of the teeth G. 0 being the next figure, and there being no key designated or marked 0, he would not disturb the second disk to the left. In the third or hundreds order he would strike key marked 1, which would move the disk one space and present 1 instead of 0 in the slot.

The operator would then depress key marked 5 in the third order, which would move the third disk five spaces, which, added to the one space already moved from 0, would present 6 in the slot. The next key to be depressed would be that marked 9 in the fourth order. This the operator would depress and move the fourth disk from 0 to 9. Thus $196.04, the sum of $101.04 and $95.00, is shown in the slot. 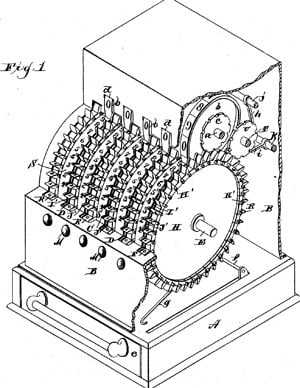 Schnarrenberger’s patent drawing from US422545

The next five patents of Schnarrenberger are for cash registers (although some of cash registers are specified as adding and subtracting machine), see the patent drawing from US422545 on the upper image. It seems Schnarrenberger’s design for cash register and indicator from his last patent (US465732) had been used in the late 19th and early 20th centuries by firms associated with John Matthew Waddell from Greenfield, Ohio, whose primary business was in the building of display cases and other business furniture, but he produced cash registers also (see below the Simple Cash Register of Waddell). 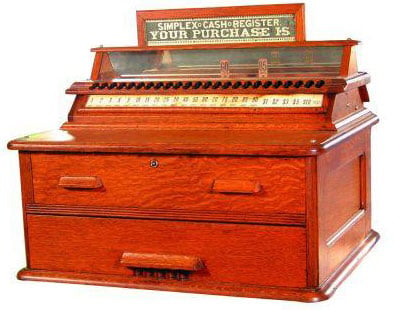 Very little is known about this obviously remarkable mechanic and inventor—Jacob H. Schnarrenberger.

By 1891 Jacob Schnarrenberger returned to Greenfield, Ohio, but nothing is known about him from that time on.

The Macintosh, or Mac, is a series of several lines of personal computers, manufactured by Apple Inc. The first Macintosh was introduced on January 24, 1984, by Steve Jobs and it was the first commercially successful personal computer to feature two … END_OF_DOCUMENT_TOKEN_TO_BE_REPLACED