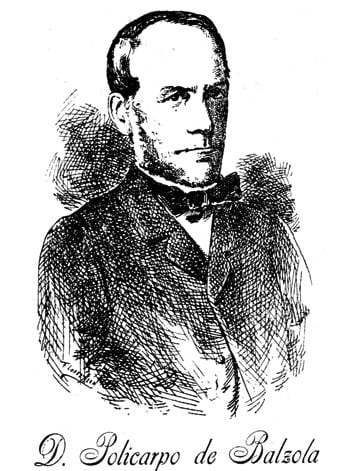 Policarpo de Balzola was born in Irun and showed a strong love for math as a young boy. He was a surveyor expert and a notary from 1836 to 1838. He was the secretary of the City Council of Irun in 1837 and the Notary Public of Irun in 1843.

In his spare time, he invented an arithmetic machine that he presented to the court in 1847. This invention earned him special favor with the Academy of Sciences and Conservatory Arts. They asked him to come to their center, but he did not want to leave his hometown. He also invented a machine that calculated differently weighted objects in seconds and another one that tracked the twelve zodiac signs and tides. In 1852 he started writing booklets about his many theories and ideas for new inventions.

In the middle of 1840s the Basque mathematician and inventor Policarpo de Balzola (1813-1879), from Irún (Guipúzcoa), Spain, (see the biography of Policarpo de Balzola) invented his machine Teclado Aritmético (Arithmetic Keyboard)—a calculating machine that had the appearance of a piano (10 years before the similar Piano machine of Thomas de Colmar).

In 1846 Balzola described his machine in a manuscript (see the manuscript of Teclado Aritmético) and ordered a prototype (2 x 9 keys) in a piano factory (the wooden case with dimensions 91 x 61 cm) and blacksmith workshop in Irun. The device was presented in several publications in early 1847. In February 1847 it was presented to Spanish Royal Court in Madrid and was highly appreciated. In June it was presented to the Academia de Ciencias (Spanish Academy of Sciences) and described in several publications, for example in the 1 April 1847, issue of the newspaper Eco de Comercio

Pressing a key puts in motion a gear wheel, thus entering the corresponding digit into the machine. There is a tens carry mechanism, to pass the motion to the next gear wheel during the transition from 9 to 0. 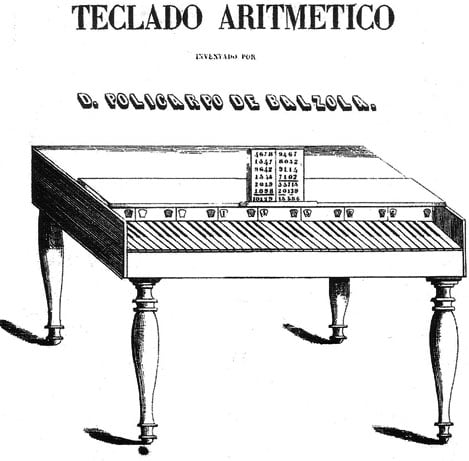 Balzola intended to modify the initial prototype, in order to be suitable for multiplication and division, and to add an additional mechanism for the calculation of fractional numbers, but the modified prototype was destroyed in a fire. The inventor was unable to recreate the machine, because of his limited financial resources.