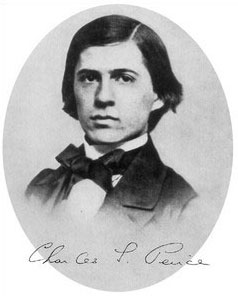 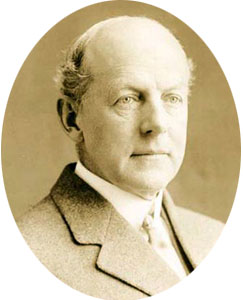 Charles Sanders Peirce (1839–1914) was a famous American philosopher, logician, mathematician, and scientist. Peirce was an innovator in many fields, including philosophy of science, epistemology, metaphysics, mathematics, statistics, research methodology, and the design of experiments in astronomy, geophysics, and psychology, but he considered himself a logician first and foremost (he was perhaps the leading logician in the world at that time). He made major contributions to logic, but logic for him encompassed much of that which is now called epistemology and philosophy of science. He saw logic as the formal branch of semiotics, of which he is a founder. One of his striking discoveries in foundational mathematics was (in 1880) how Boolean algebra could be expressed via a single binary operation, either NAND or its dual, NOR.

From 1879 till 1884 Peirce was a lecturer on the logic at the new Johns Hopkins University. Although his appointment at Hopkins was in logic, he was also busy there with research in psychology and philosophy. Peirce had a number of talented students in logic, whose work may be sampled in Studies in Logic, printed in 1883. Among this bright pupils was Allan Marquand (1853-1924), at that time Fellow in Philosophy and Ethics at Hopkins, until he graduated in 1880 as Ph.D. in Philosophy. His thesis, supervised by Peirce, was on the logic of Philodemus. Marquand returned to Princeton in 1881 to teach Latin and logic. During the 1881-82 academic year, he built a mechanical logical machine, that is interesting for us. The machine was presented in 1885 and described in the 1886 article A New Logical Machine

Allan worked within the history of logic and upon trying to improve the design and function of what were then called logical machines, at least they were so called within Peirce’s circle. Marquand however decided to went further and began with improvements upon the Logical Piano of Jevon. (It is unknown, if Marquand was acquainted with the logical machine of British logician and philosopher John Venn (1834-1920). Venn speculates on the design of a logical machine, based on the machine of Jevons. He even gives schematic diagrams for the construction of such a machine for four propositions, but it is not clear whether the machine was ever built.) 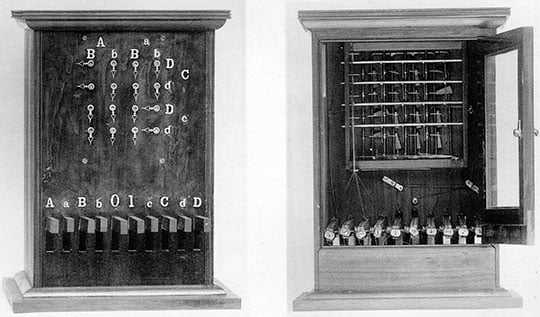 The New Logical Machine of Marquand

The logical machine of Marquand (see the upper photo) was designed to solve problems by formal logic. Construction with size 30/20/15 cm, from the wood of a red cedar post from Princeton’s oldest homestead, the machine displayed all the valid implications of a simple logical proposition by using a hotel annunciator and an arrangement of rods and levers, catgut strings and spiral springs.

Initially the machine of Marquand was met with disappointing reception. Peirce tried to encourage his pupil and friend (they were so close, that Marquand was lending him money:-), and proposed some possible ways for improving. One of them was to use electricity (there is a 1886 letter from Peirce to Marquand, presenting this idea). It is possible even the whole electromagnetic design of the machine to have been made by Peirce, because Marquand after 1886 wrote no more on logical machines, while Peirce wrote in 1887 an amazing article (Logical Machines) on that topic for American Journal of Psychology. The article mentioned Marquand’s work in a positive way, but Peirce continued to make comments on the problem, the latest known one being in 1906.

There is a circuit diagram for the electromagnetic logical machine in the Marquand’s archive, made around 1890 (see the lower image). The operating core consists of 16 electromagnetic elements—electromagnet with five separate coils, an armature with air gap, and spring to maintain a position for the unenergized armature (the armatures are shown only at the upper left position of the diagram). The information is represented as states of magnetic energy in each of the 16 elements. 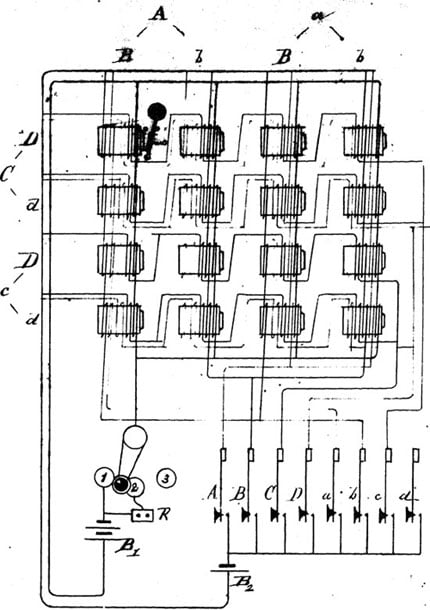 The machine is used in this general way:
First the programmer “resets” the machine, using the operate switch. Then a premise is entered by depressing the appropriate programming keys. Now using the control switch and the operate switch, the result being that the machine will remember all the elements previously programmed by key entries. One can now enter a new premise with the program keys, then using the operate switch to see the result of 2 premisses entered. One can save that again, and see the result of a third premise entered, and so on. At the proper point one can stop, inspect the read-out facility, which in this case is the pointers of element armatures, and from that determine what conclusion is consistent with the premisses entered.

The machine is easy expandable to any size (any number of terms), hence this seems to be a design for a general-purpose, truth-functional, logical computer.

As a conclusion—the first electrical logical machine was invented in 1886 by Charles Peirce and Allan Marquand.