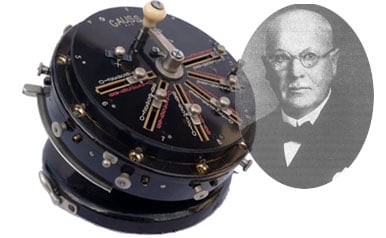 The German engineer Christel Hamann (1870-1948) (biography of Hamann) is an outstanding figure in the world of mechanical calculators. He is a holder of many patents in this area and the constructor of countless mechanisms and calculators, let’s mention only Berolina, Mercedes Euklid, Hamann Manus, a differential engine, etc., as well as the remarkable calculator Gauss, the object of this article.

The idea of a machine, based on the stepped drum of Leibniz, mounted in the center of the machine, was not a new one. As early as in the middle 1860s the brilliant swedish engineer Axel Jacob Petersson invented a very interesting machine of this type, but it didn’t became popular and only several devices had been produced.

In the end of 1899 a local Berlin businessman (merchant), Paul Haack (it is unknown if Haack was aware of the machine of Petersson, but let’s mention only an interesting detail—the family name of Petersson’s wife was Haak, may be just a coincidence?!) contacted Hamann, with the idea to create a practical and handy calculator, as opposed to the heavy mechanical calculators of the day.

Hamann welcomed this idea, as the Landwirtschaftliche Hochschule Berlin has already contacted him with such a request—to construct a small calculator to be used by surveyors, thus Haack and Hamann signed an agreement.

It is not clear what exactly was the role of Haack in the future cooperation, but the first patents for the device have been granted namely to Haack, as an inventor or as an assignor of Hamann. Most probably Haack provided the financial support, while Hamann was in charge for the construction.

At some point however, the cooperation between Haack and Hamann abruptly ended and during the next years both of them tried to patent the ideas of the machine and they applied for and had been granted quite a few patents in different countries. Finally both Hamann and Haack received patents for some kind of device, but only Hamann managed to launch it to the market.

The abovementioned personal and patent war is not of big interest for us, let’s see only two of the Hamann’s US patents for the device, US703785 and US832666. As you can see from the patents, the 2 patents are quite different. Hamann was a genius constructor and was able to improve his designs on daily basis.

Only several months have been enough for the genius Hamann to prepare the first model of the machine, and it was exhibited at the Paris Exposition Universal of 1900, where it was awarded with a gold medal. Industrial production of an improved model was commenced in 1905, and the sales were handled by the mail-order house R. Reiß in Liebenwerda in Saxony.

The machine was in production 1905-1911 in Mathematisch-mechanisches Institut Hamann and in Mercedes-Bureau-Maschinen-Gesellschaft in Berlin. Some 1000 devices have been produced. Dimensions of the first model are: diameter 12.5, height 10 cm; weight 2.6 kg with base, 850 g without base. In 1906 was presented a new model, the so called Mercedes Gauss (see the upper image), with almost the same construction, but slightly bigger.