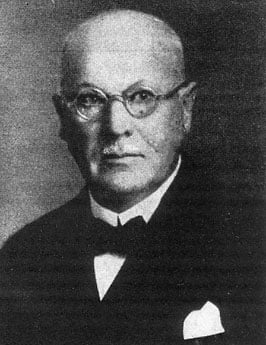 Christian (sobriquet Christel) Bernhard Julius Hamann was born on 27 February, 1870, in Hammelwarden, near Oldenburg, Germany, to Georg Wilhelm Christian Hamann (b. 1834), a border guard and later usher in Ellwürden, and Catherina Margaretha Louise (b. 1837).

Obviously from his youth Hamann demonstrated an extreme talent and energy in technics. As a teenager he attended a local technical school in Bremerhaven, working at the same time as an apprentice-mechanic at the Nautischen Institut bei W. Rudolph in Bremerhaven. Then he worked in Mathematisch-Mechanischen Institut von A. Ott in Kempten, in workshops of Carl Zeiss in Jena and in the workshop of Carl Bamberg in Berlin. In 1896 Hamann became independent by starting his own institute in Berlin—the Mathematical-Mechanical Institute in Berlin-Friedenau.

Initially he dealt with the construction of geodetic and mathematical instruments, which he developed after new scientific ideas and also successfully introduced into practice and for which at the 1900 World Exhibition in Paris he was awarded the gold medal. Later Hamann devoted a part of his time in construction of textile machinery, cinematographic, medical and anthropological tools, and miniature steam engines. In the beginning of 1900s Hamann however recognized the disadvantages of fragmentation of his interests and decided to concentrate on the construction of the calculating machines.

Hamann started to develop his first calculating machines in 1898. Initially he had the intention of using the construction of Selling, which he knew perfectly, and the resulting construction was simple, but not reliable enough. Then he decided to use the stepped drum of Leibniz, developing two very good calculating machines—"Gauss" and "Berolina". In 1903 he designed the so-called proportional system of levers (parallel racks that are proportionally displaced by a lever connected to the racks), which was later used in the famous calculator "Mercedes Euklid".

After the WWI Hamann worked for the company Berliner Deutschen Telephonwerke- und Kabelindustrie AG in Berlin. In 1922 he developed a new type of calculating mechanism, so called Schaltklinke (switching-latch-wheel), which the first time allowed an automatic division. The first calculating machine equipped with this mechanism was the four-species calculator "Hamann Manus" from 1925.

In 1933 Hamann was appointed as a honorary doctor of the TH Berlin (Technical University of Berlin).

The Macintosh, or Mac, is a series of several lines of personal computers, manufactured by Apple Inc. The first Macintosh was introduced on January 24, 1984, by Steve Jobs and it was the first commercially successful personal computer to feature two … END_OF_DOCUMENT_TOKEN_TO_BE_REPLACED