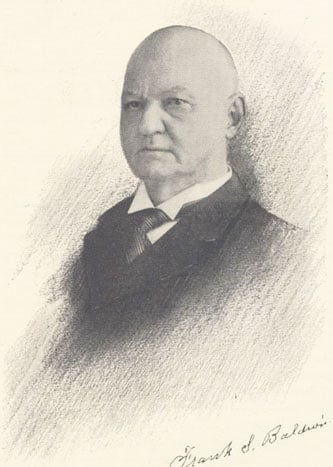 There is a comprehensive interview of Frank Baldwin from 1919, in which he describes the significant moments of his life. In that he describes his child hood, education and career in detail.

His family moved to Nunda, Livingston County, New York when he was only two years old. There he attended the first free school system created by the State of New York. He showed promise at a young age and and surprised all his teachers by memorizing the decimal of Pi to 128 places.

After graduating from the Nunda Institute he enrolled at the Union College, however his education was cut short due to the his father becoming invalid due to an accident. He had to take over the management of his fathers architectural business which officially put an end to his education.

He started experimenting on various ideas and devices and in 1855 applied for his first ever patent for an arrowhead self-couple used in railroad cars. However, it was denied, and that denial spurred him on as he became more dedicated towards becoming a successful inventor.

In 1860 he helped one of his family members register for a patent for a corn planter. He tried to join the Civil War, but due to stress. he had to resign after three months. In 1869 he got a job as a manager of a mill in St. Louis and started devoting more of his time to working on his own ideas and innovations.

Around this time, he invented a number of devices, a) Anemometer, that recorded the direction of the wind, b) a step device for street cars that recorded the number of passengers being carried, c) street indicator that was geared with an axle that showed each street in succession, with the help of an illuminated box. 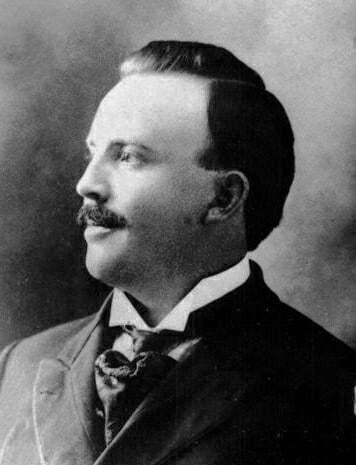 He also invented the “Recording Lumber Measure” which he successfully patented. This machine could simultaneously measure and record four different kind of lumber automatically. According to him, this was a device that started him onto the path of thinking about computing machine and the beginning of the Monroe.

After encountering the Thomas type of calculating machine, created by C. X. Thomas of Colmar in 1820, he thought about increasing the efficiency by adding 8 more cylinders to the machine. In 1874, he filed and was granted the patent for ‘Arithmometer’ the first calculator sold in the USA. Both of these machines were displayed at the Franklin Institute, Philadelphia and got the John Scott Medal for meritorious invention.

He partnered with the Reliance Machine Works in Philadelphia to manufacture his calculating devices at a larger scale while he took over the sales department. He found success in New York and Washington, however, it was not profitable as he had hoped and he had to wind down and return to St. Louis. It was around this time his device fell in the hands of Mr. Ohdner, a Swedish national who patented the product in Europe.

In 1900, he got patent for the Baldwin Computing Engine, the machine that could multiply or divide with the stroke of a button. In 1908, he got the patent for Baldwin Recording Calculator. He met Mr. Jay R. Monroe in 1911, and the association led to creation of the Monroe High Speed Adding-Calculator.

Frank Baldwin died on April 8, 1925, in a private hospital in Morristown, New Jersey, following an operation, within two days of reaching his 87th birthday. Until the last day of his life, his mind was clear and keen, and his interest in his family and the things about him was just as pronounced as ever.

Besides the several patents of calculating devices, Baldwin is a holder for several other patents for machines—e.g. for cement or mortar mixes (1891) and roundabout (carousel) in 1892.