You are here: Home / People / Philon of Byzantion – Biography, History and Inventions

Very little in known about the greek scientist Philon (ca. 280–220 BC) (sometimes called Philo) of Byzantion (Greek: Φίλων ὁ Βυζάντιος). Byzantion is an ancient greek city (founded in 667 BC), a precursor of Constantinople, the capital of Eastern Roman Empire, and Istanbul of modern Turkey. The most information about Philon’s life comes from the only work, which has survived (at least major parts have survived) at the present time—Compendium of Mechanics (Mechanike syntaxis). As in this treatise Philon writes about the catapult which was recently invented by Ctesibius of Alexanfria, thus we can date Philon fairly accurately and we know that he wrote his treatise Mechanics around 250 BC. In this treatise, Philon describes also journeys he had made to Rhodes and to Alexandria to study catapults.

As far as we know Philon’s Mechanics had nine books:
1. Isagoge (Introduction to mathematics)
2. Mochlica (on the lever, general mechanics)
3. Limenopoeica (on the building of harbours)
4. Belopoeica (on catapults (artillery))
5. Pneumatica (on devices operated by air or water pressure)
6. Automatiopoeica (on automatics (mechanical toys and diversions))
7. Parasceuastica (on the building of fortresses)
8. Poliorcetica (on siege craft (besieging and defending towns))
9. Peri Epistolon (on secret letters)

The text of Books 4, 5, 7 and 8 has survived, while the rest has been lost. Fortunately Philon has the habit of cross referencing fully in his work so we can learn quite a bit about what was contained in the lost sections by studying the surviving ones.

The book Pneumatica includes not only the first description of a water mill in history, but also the earliest known escapement mechanism, as part of a washstand automaton (see the image below). 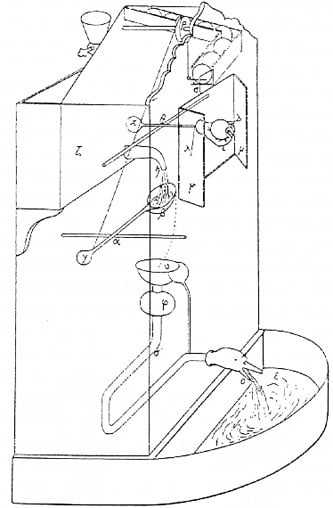 Unfortunately, the most interesting in the context of this site part of the Philon’s treatise—Automatiopoeica, didn’t manage to survive to the present time, so we can only guess what kind of automatic machines it describes. However, in Pneumatica is described also a human-like automatic device in the form of a maid, holding a jug of wine in his right hand. When one placed a cup in the palm of robot’s left hand, it automatically poured wine initially and then poured water into the cup, mixing it when desired.

Philon’s works had a great influence over the next generations of mechanics, and are mentioned as a source by many later scientists like Vitruvius, Heron of Alexandria, many Arabic scientists, etc.

The Macintosh, or Mac, is a series of several lines of personal computers, manufactured by Apple Inc. The first Macintosh was introduced on January 24, 1984, by Steve Jobs and it was the first commercially successful personal computer to feature two … END_OF_DOCUMENT_TOKEN_TO_BE_REPLACED