During the 1830’s the englishman Thomas Fowler (see biography of Thomas Fowler) became the sole manager and partner of the only bank in the Torrington, Devon, Messrs Loveband & Co. He also became treasurer of the Torrington Poor Law Union. The tedious nature of the calculation of payments for each of the parishes, which was one of his responsibilities, led him to attempt to automate the calculations by the use of tables. Fowler’s solution was typically brilliant and led, in 1838, to Fowler’s Tables for Facilitating Arithmetical Calculations

The tables used a method based on Fowler’s realisation that any number might be produced by a combination of the powers of 2 or 3. The first section of the booklet is the Binary Table, or a table of indices of the number 2 from 1 to 130048. The second section is the Ternary Table, or a table of the indices of the power of the number 3 from 1 to 3985607.

Soon after Fowler had devised the tables, he used the same ideas to build a mechanical calculating machine. This was exhibited before members of the Royal Society in May 1840. In a subsequent letter to the famous English mathematician and astronomer George Bidell Airy, Fowler writes:

This Machine was constructed entirely with my own hands (principally in wood) with the utmost regard to economy and merely to put my ideas of this mode of calculation into some form of action; It is about 6 feet long , one foot deep and three feet wide. In Brass & Iron it might be constructed so as not to occupy a space much large than a good portable writing desk and with powers such as I have described.

The Astronomer Royal, Professor George Airy was to promote Fowler’s invention to a gathering of the British Society for the Advancement of Science in August 1840. In the minutes of that meeting we read:
"Mr Airy gave an account of Mr Fowler’s new Calculating Machine. The origin of the machine was to facilitate the guardians of a poor-law district in Devonshire in the calculating of the proportions in which the several divisions were to be assessed. The chief peculiarity of the machine was, that instead of our common decimal notation of numbers, in it ternary notation was used; the digits becoming not tenfold but threefold more valuable as they were placed to the left; thus, 1 and 2 expressed one and two as in common, but 10 expressed not ten but 3, 11 four, 12 five; but again 2 can be expressed by three, one taken from it. Now, let T (one with a bar over it), written thus with a small bar above it, mean that it is subtractive; then 12 and 2T are the same in effect, both meaning five; and for a similar reason, by replacing 2 with 1T, we have five written in there several ways; 12, or 2T, or 1TT. The last is the form used it is obvious by an assemblage or unit digits thus positively or negatively written, any number may be expressed. In the machine levers were contrived to bring forward the digits T or 1 as they were required in the process of calculation."

Fowler writes to Airy:
"I had the honor in May 1840 to submit the machine to the inspection of many Learned Men in London among whom were the Marquis of Northampton, Mr Babbage, W F Baily and A de Morgan Esq with many other Noblemen and Gentlemen, Fellows of the Royal Society etc. and it would have been a great satisfaction to me if I could have had the advantage of your opinion also. They all spoke favourably of my invention but my greatest wish was to have had a thorough investigation of the whole principle of the machine and its details, as far as I could explain them, in a way very different from a popular exhibition: this investigation I hope it will still have by some first rate men of science before it is be laid aside or adopted.
I am fully aware of tendency to overrate one’s own inventions and to attach undue importance to subjects that preoccupy the mind but I venture to say and hope to be fully appreciated by a Gentleman of your scientific achievements, that I am often astonished at the beautiful aspect of a calculation entirely mechanical. I often reflect that had the Ternary instead of the binary Notation been adopted in the Infancy of Society, machines something like the present would long ere this have been common, as the transition from mental to mechanical calculation would have been so very obvious and simple.
I am very sorry I cannot furnish you with any drawings of the Machine, but I hope I shall be able to exhibit it before the British Association at Devonport in August next, where I venture to hope and believe I may again be favoured with your invaluable assistance to bring it into notice. I have led a very retired life in this town without the advantages of any hints or assistance from any one and I should be lost amidst the crowd of learned and distinguished persons assembled at the meeting without some kind friend to take me by the hand and protect me."

Charles Babbage, Augustus De Morgan, George Airy and many other leading mathematicians of the day witnessed his machine in operation. Airy asked that he produce plans of his machine but Fowler, recalling his experience with the Thermosiphon, refused to publish his design.

The only depiction of the calculating machine survived to the present time, is in a stained glass window, in St. Michael’s Church in Torrington, Devon, ordered by Fowler’s son. Besides the upper mentioned notices of Fowler, the only other information about his machine is the Augustus DeMorgan’s description. DeMorgan saw the abovementioned demonstration of Fowler’s machine in 1840 and described it. Below is the description:

Almost all information, which can be found at the present day for Fowler, have been discovered and classified by the researchers Pamela Vass and David Hogan, from North Devon, England. In 1999 they decided to contact a skillful mechanician—Mark Glusker, in order to make a replica of the machine. Due to the scare historical information, Mr. Glusker have had a hard time during his work, but managed to produce a working device. The model was completed in about eight months, and was presented to the Great Torrington Museum in a ceremony in August of 2000. Bellow you can see some skecthes of the replica. All copyrights for the replica and photos are property of Pamela Vass, David Hogan and Mark Glusker. 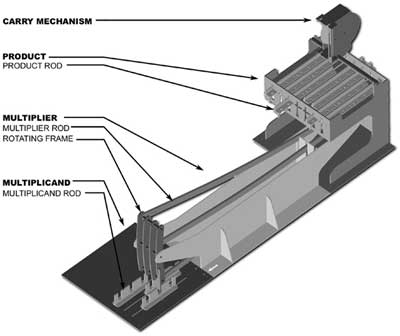 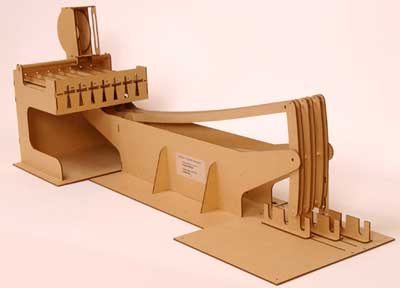