VisiCalc of Dan Bricklin and Bob Frankston In the spring of 1978, a Harvard Business School student, Dan Bricklin, came up with […] 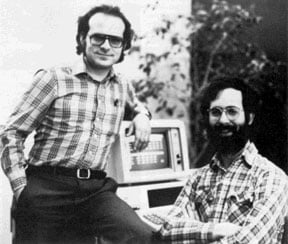 In the spring of 1978, a Harvard Business School student, Dan Bricklin, came up with the idea for an interactive visible calculator, the program (called VisiCalc), which will be called later the First Killer App of the Computer Era

Bricklin certainly was not he inventor of the electronic spreadsheet. First known ideas for such a program were from 1961, when professor Richard Mattessich pioneered the development of computerized spreadsheets for use in business accounting. Then in 1969 Rene Pardo and Remy Landau co-invented "LANPAR" LANguage for Programming Arrays at Random, an electronic spreadsheet type application, which was used for budgeting at Bell Canada, AT&T, Bell operating companies, and General Motors. Mattessich, Pardo and Landau’s work and that of other developers of spreadsheets on mainframe computers probably had no influence on Bricklin however. Thus, a history of the modern era of microcomputer-based electronic spreadsheets should begin with the VisiCalc.

Daniel Singer Bricklin was born on 16 July, 1951, in Philadelphia, USA, where he attended Akiba Hebrew Academy during his high school years. Then he received a B.S. in electrical engineering/computer science from the MIT (Massachusetts Institute of Technology), before to go for a MBA from Harvard University in 1977.

Once sitting in his room, as he remembered …I would daydream. "Imagine if my calculator had a ball in its back, like a mouse…" (I had seen a mouse previously, I think in a demonstration at a conference by Doug Engelbart, and maybe the Alto). And "…imagine if I had a heads-up display, like in a fighter plane, where I could see the virtual image hanging in the air in front of me. I could just move my mouse/keyboard calculator around on the table, punch in a few numbers, circle them to get a sum, do some calculations, and answer ‘10% will be fine!’" (10% was always the answer in those days when we couldn’t do very complicated calculations…)

Later in the summer of 1978, between first and second year of the MBA program, while riding a bike along a path on Martha’s Vineyard, he decided that he wanted to pursue this idea and create a real product to sell after I graduated.

So in the spring of 1978 Bricklin tried prototyping the product’s display screen in Basic on a video terminal connected to the Business School’s timesharing system. His hope for using a mouse was replaced in the first personal computer prototype in the early fall of 1978 by the game paddle of the Apple ][. (This was a dial one could turn to move game objects back and forth). One could move the cursor left or right, and then push the "fire" button, and then turning the paddle would move the cursor up and down. The R-C circuit or whatever in the Apple ][ was too sluggish and my pointing too imprecise to accurately position the cursor that way, so I switched to the two arrow keys of the Apple ][ keyboard (it only had 2) and used the space bar instead of the button to switch from horizontal movement to vertical

The first PC prototype of VisiCalc was created over a weekend on an Apple ][ (using Apple Integer Basic), borrowed for the purpose from a friend, Dan Fylstra, later his publisher. It did not scroll, yet, but it had the columns and rows and some arithmetic. 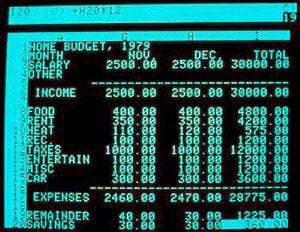 A screenshot from the first version of VisiCalc

Then Bricklin decided to recruit a more experienced programmer, to do a real, assembler version of the program (first for the MOS Technology 6502 microprocessor used in the Apple ][). Thus he called his MIT colleague Bob Frankston, to build production code (faster speed, better arithmetic, scrolling, etc.). Frankston not only managed to code the program in assembler (using an assembler, which ran on a minicomputer equipped with the Multics operating system), but also expanded the program and packed the code into a mere 20k of machine memory, making it both powerful and practical enough to be run on a microcomputer. Actually the size of the program was the biggest problem for Frankston, because Apple II had a limited memory, 16 KB of RAM on the low-end Apple II. No matter how hard Frankston tried however, he could not fit VisiCalc in the 16, that’s why VisiCalc would only be available for the much more expensive 32 KB Apple II.

Bricklin and Frankston formed Software Arts Corporation in January, 1979. In May 1979, the firm Personal Software of Dan Fylstra (later renamed VisiCorp) began marketing VisiCalc with a teaser ad in Byte Magazine (see the nearby image). Initially Bricklin conceived several names for the program, between them Calcu-ledger and Calcu-paper, but the name "VisiCalc" is an abbreviated form of the phrase "visible calculator" was chosen by Dan Fylstra.

VisiCalc was one of the key products that helped bring the microcomputer from the hobbyist’s desk into the office. Before the release of this groundbreaking software, microcomputers were thought of as toys; VisiCalc changed that.

VisiCalc went on sale in November of 1979 and became immediately a big hit. It retailed for US$100 and sold so well that many dealers started bundling the Apple II with VisiCalc. The success of VisiCalc was one of the main reasons Apple to be turned into a successful company, selling tens of thousands of the pricey 32 KB Apple IIs to businesses that wanted them only for the spreadsheet.

In 1981, Software Arts made over $12 million in royalties from VisiCalc. It became Personal Software’s flagship product, financing the groundbreaking VisiOn office suite and GUI. Just before the release of VisiOn, Personal Software was renamed VisiCorp.

In 1983, Lotus 1-2-3 was released. It was available exclusively for the IBM PC and other MS-DOS computers, and it quickly outsold VisiCalc. Lotus worked a lot like VisiCalc, which made migration easy, and it took full advantage of the PC’s 80-column display and vast amounts of memory, which allowed much bigger spreadsheets than the Apple II could handle.

Microsoft also released in 1980 a spreadsheet, MultiPlan, then Excel in 1985. Countless other developers heated up, tensions developed between VisiCorp and Software Arts. Eventually, VisiCorp sued Software Arts when the company delayed development of VisiCalc for the IBM PC so they could first finish a version for the Apple IIe and III.