The first man, who was flashed upon to use the electricity for calculation purposes, was probably a German mechanic, showman, electrifier and […]

The first man, who was flashed upon to use the electricity for calculation purposes, was probably a German mechanic, showman, electrifier and miracle healer, physicist, chemist, teacher, author, and mail order company owner, named Johann Conrad Gütle (1747-1827). Gütle was a self-taught scientist, who from 1780 worked as a traveling experimenter, organizing demonstrations at fairs and in restaurants in many German towns.

During one of his shows, in the beginning of June 1785, in Heilbronn am Neckar, a town in southwest Germany, Gütle demonstrated several electrical experiments, between them an electric calculating machine. The event was described on the local Journal von und für Deutschland thus: In our area arrived the former bookbinder from Schwabach, called Gütle, who has knowledge in experimental physics that goes beyond empirical knowledge and knows how to amuse the public with his electrical experiments. However, there were also some gasconade and hand-held games. He showed also his electric calculating machine and cubes, which he pretends to show electrical phenomena of them without the tools being connected to the electric machine, a mere illusion consisting in an internally hidden conductor that cannot be seen when the machine is on is not disassembled…

The electric accounting machine, a number chosen by a person in secret, is instantly calculated by the electric fire on that machine, in the manner the person requested, either by numbering, adding, multiplication, dividing, or subtracting given numbers. There are different numbers on four boards, Tab. V, Fig. 21, you leave it up to a person to choose one of them, just ask them to put the board on which the number is on the magic table, and now determine what the electric fire should do with the chosen number, whether it should display such numbers, add, multiply, divide or subtract, and determine how much. The product of the displayed invoice type immediately appears in the electric fire, by discharging the bottle. You can see that the electric fire is making a lot of changes again. The cost of device was announced as 10 Thaler. 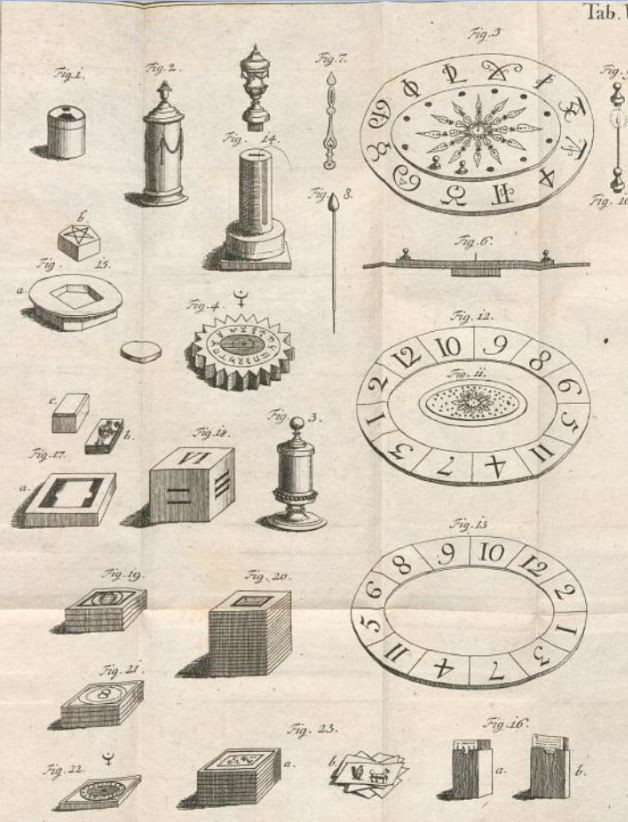 As you can see, Gütle used as an electrical source a “bottle”, i. e. a Leyden jar, an electrical component, invented in 1740s, which stores a high-voltage electric charge (from an external source) between electrical conductors on the inside and outside of a glass jar. The first true battery (so called Voltaic Pile) will be made in early 1800 by the celebrated Italian physicist Alessandro Volta (1745-1827).

Obviously, Gütle as a good showman and salesman, decided to create a great impression on his public and readers, combining two interesting but puzzling areas of knowledge than—calculating machines and electricity. Certainly, he was not able to create a real electric calculator (first electro-magnetic adding machine in the world will be created some 100 years later by the US statistician, romance novelist and amateur engineer Charles Pidgin), but nevertheless he deserves our attention for his imagination.

ohann Conrad Gütle was born on 25 March 1747, in Schwabach, a town near Nuremberg in the center of the region of Franconia. He was the son of the local burger Johann Friedrich Gütlein, a bookbinder and fodder maker. As young, Gütle learned his father’s trade (bookbinding), but over time, acquired self-taught knowledge in physics and mathematics.

Johann Conrad Gütle was a hyperactive man and a jack of all trades, who had a wide variety of professions. From around 1780 he used to work as a traveling experimenter (showman), and he also sold and repaired electrifying machines and accessories, and also healed the sick by electrifying (for the latter, he had problems, and during one of his shows, in Heilbronn, he was scolded as a fraud.) Gütle used to work also as a mechanic, watchmaker, and private teacher for mathematics, physics and natural science.

Gütle settled in Nuremberg in 1788 and during the next 40 years he published some 70 different titles (including sales catalogs and books), mainly in the area of electricity, mathematical and physical instruments, mechanics, geometry, etc. He was well known especially as a producer of electrification machines, as a drummer for lightning protection, and 1788 he installed the first lightning-conductors in a few places in Franconia, and enjoyed an excellent reputation in this area. Gütle was mentioned in international literature as an inventor of “electric lamp” in which a gas lamp was ignited using an electrophor. He ran a lively mail order business from Nuremberg and also manufactured cleaning, beauty and hair restoration products as a “chemical industry expert”.

In 1770 Gütle married to Sophia Magdalena Kern. Soon was born his first son, Friedrich Christoph Gütle, who became a skillful watch-maker. Sophia Magdalena died in 1782, and in 1788 Gütle married second time to Antonia Steingruber (she died on 26 Feb 1808), granddaughter of the famous Ansbach master builder and architect Johann David Steingruber (1702-1787). From his marriages, Gütle had eight sons, and three daughters, but only six of his children survived to adulthood.