William Burns had a younger brother—Jabez Burns (1805–1876), who became a famous English nonconformist divine and Christian philosophical writer and whose name was given to his nephew.

William Burns was fairly well educated for that time and place and an ardent Chartist, who worked as a basket maker. It appears that a similar education was most likely given to young Jabez because during his first winter in USA he taught in a country school.

In 1829 the family moved to Dundee, Scotland. Nothing is known about Jabez until the summer of 1844, when he arrived to New York with his mother, to seek his fortune.

Jabez had continued regularly in the employ of coffee and spice firms, and at one time he was bookkeeper for the famous Globe Mills. It seems durng this period in the middle 1850s he devised his calculating device, in order to facilitate the lengthy calculations. He advanced slowly, because he lacked real trading talent; but he was learning all about the handling of goods, from purchase to final delivery; and when he quit bookkeeping for Globe Mills, and began to build his patent roaster, he could advise clients reliably about every factory detail.

Thus in 1850s and 1860s Jabez had risen from a cartman, to a peddler, bookkeeper, gifted inventor, to founding a company that has been referred to as the "unique coffee-machinery workshop, the greatest of its kind in the United States." In 1864, Jabez Burns founded his trademark company, Jabez Burns & Sons, and began to manufacture the improved coffee roaster which he invented. The company became quite successful and existed up to 1960, when was bought out by a much larger firm. 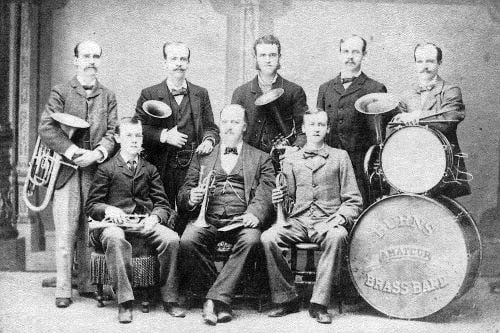 Burns Brass Band of Jabez Burns (front row center) and his sons, circa 1880

The Macintosh, or Mac, is a series of several lines of personal computers, manufactured by Apple Inc. The first Macintosh was introduced on January 24, 1984, by Steve Jobs and it was the first commercially successful personal computer to feature two … END_OF_DOCUMENT_TOKEN_TO_BE_REPLACED