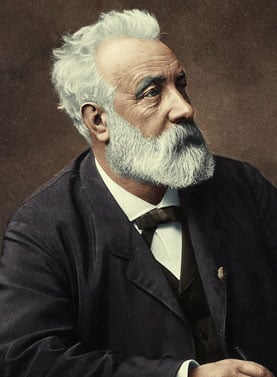 The great French novelist and poet Jules Gabriel Verne (1828–1905) is best known for his adventure novels and his profound influence on the literary genre of science fiction.

In 1889 Verne wrote an intriguing short story “In the Year 2889”, following a day in the life of a news mogul 1000 years in his future, in which he dreams for a global network. It is believed that the story was chiefly if not entirely the work of his son—Michel Verne (1861-1925), but undoubtedly many of the topics in the story echo Jules’ ideas.

The above mentioned news mogul, named Fritz Napoleon Smith, used two communication devices, a phonotelephote and a telephote, to spy his wife:

“This morning Mr. Fritz Napoleon Smith awoke in very bad humor. His wife having left for France eight days ago, he was feeling disconsolate. Incredible though it seems, in all the ten years since their marriage, this is the first time that Mrs. Edith Smith, the professional beauty, has been so long absent from home; two or three days usually suffice for her frequent trips to Europe.

The first thing that Mr. Smith does is to connect his phonotelephote, the wires of which communicate with his Paris mansion. The telephote! Here is another of the great triumphs of science in our time. The transmission of speech is an old story; the transmission of images by means of sensitive mirrors connected by wires is a thing but of yesterday.

A valuable invention indeed, and Mr. Smith this morning was not niggard of blessings for the inventor, when by its aid he was able distinctly to see his wife notwithstanding the distance that separated him from her. Mrs. Smith, weary after the ball or the visit to the theater the preceding night, is still abed, though it is near noontide at Paris. She is asleep…”

Mr. Smith introduced an advanced system, which made him rich:

“Every one is familiar with Fritz Napoleon Smith’s system—a system made possible by the enormous development of telephony during the last hundred years. Instead of being printed, the Earth Chronicle is every morning spoken to subscribers, who, in interesting conversations with reporters, statesmen, and scientists, learn the news of the day.

Furthermore, each subscriber owns a phonograph, and to this instrument he leaves the task of gathering the news whenever he happens not to be in a mood to listen directly himself. As for purchasers of single copies, they can at a very trifling cost learn all that is in the paper of the day at any of the innumerable phonographs set up nearly everywhere.”

“Mr. Smith continues his round and enters the reporters’ hall. Here 1500 reporters, in their respective places, facing an equal number of telephones, are communicating to the subscribers the news of the world as gathered during the night. The organization of this matchless service has often been described. Besides his telephone, each reporter, as the reader is aware, has in front of him a set of commutators, which enable him to communicate with any desired telephotic line.

Thus the subscribers not only hear the news but see the occurrences. When an incident is described that is already past, photographs of its main features are transmitted with the narrative. And there is no confusion withal. The reporters’ items, just like the different stories and all the other component parts of the journal, are classified automatically according to an ingenious system, and reach the hearer in due succession. Furthermore, the hearers are free to listen only to what specially concerns them. They may at pleasure give attention to one editor and refuse it to another.”

“Left alone, Mr. Smith busied himself with examining his accounts—a task of vast magnitude, having to do with transactions which involve a daily expenditure of upward of $800,000. Fortunately, indeed, the stupendous progress of mechanic art in modern times makes it comparatively easy. Thanks to the Piano Electro-Reckoner, the most complex calculations can be made in a few seconds. In two hours Mr. Smith completed his task. Just in time.

Scarcely had he turned over the last page when Dr. Wilkins arrived. After him came the body of Dr. Faithburn, escorted by a numerous company of men of science. They commenced work at once. The casket being laid down in the middle of the room, the telephote was got in readiness. The outer world, already notified, was anxiously expectant, for the whole world could be eye-witnesses of the performance, a reporter meanwhile, like the chorus in the ancient drama, explaining it all viva voce through the telephone.”

Do you find it funny and primitive? Let’s remind you, it was 1889, and the most advanced computers were mechanical marvels like Bollee’s multiplier