Gilbert Warren Chapin was born on 1 August, 1847, in Springfield, Mass., to Joel Chapin and Amelia Parsons.

Joel Chapin was brought up on his father’s farm, and received a good education in the public schools and at Yale College. He was a ripe scholar, a good linguist, speaking several languages, author of a series of four grammars, and held high place as an educator. He was principal of Boys’ Schools in Springfield, Mass., Bridgeport, Trumbull and other places in Connecticut. He studied for the ministry and was licensed to preach shortly before his early death on 27 August, 1852, in Bridgeport.

Gilbert Warren received his education in the common schools and worked on the farm in his boyhood. When he was 18 years old he left home and began his business career as clerk in a wholesale carpet establishment. Soon after he took a position clerk in a retail store carpet store and at the end of his third year in business accepted a position in the office of the largest shoe jobbing concern in New York. During this period he patented a very interesting calculating machine (see calculating machines of Gilbert Chapin). Altogether he spent 17 years in the shoe business. He gained some experience in the newspaper and insurance business also.

Since 1889 Chapin has been in the Society for Savings of Hartford (the largest bank in New England) and for many years has been its actuary and was in charge of the securities and accounts of the bank, representing various interests in the capacity of executor, conservator, trustee, etc.

Later Gilbert Chapin developed a real estate and rental business in Hartford, and became member of many societies and clubs. 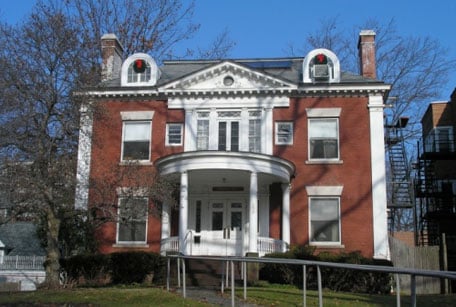 The 1898 Georgian Revival style house of Gilbert Warren Chapin on 350 Farmington Avenue in Hartford, Conn. (just nearby the houses of the greatest US authors—Mark Twain and Harriet Beecher Stowe)

Gilbert Warren Chapin died on 1 April, 1932, in Hartford and was buried in Mansfield Center Cemetery, Conn., near his wife Delia.