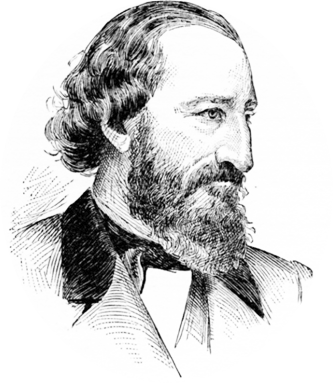 George Phineas Gordon (see biography of George Phineas Gordon) was a famous American inventor (with more than 50 patents on his name), printer, and businessman, who developed the basic design of the most common printing press ever, the Gordon Letterpress. At the end of his life, in the 1870s, he was obviously so wealthy, that decided to produce an adding device, to keep accounts of his money :-).

The adding machine of Gordon, similar to several earlier devices (like these of House, Taylor, Holman, and others), was in production in the late 1870s, as more than 30 machines were produced.

The adding device of Gordon is a stylus-operated circular adder with a capacity of up to 9999. It measures approximately 23 cm in diameter with a very early bakelite and thermoplastic base with a heavy nickel-plated top mechanism. The machine may be used on a desk or screwed to the wall.

Let’s see the operation of the device, using the directions, printed on the box (see the lower image). 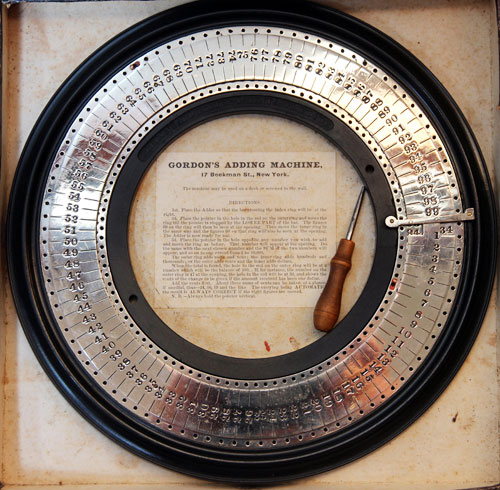 1. Place the adder so that the bar crossing the index ring will be at the right.

3. Place the pointer in the hole opposite any number you wish to add and move the ring as before. That number will appear at the opening. Do the same with the next chosen number and the SUM of the two numbers will appear, and so on to any extent from 1 to 10000.
The outer ring adds units and tens; the inner ring adds hundreds and thousands, or the outer adds cents, and the inner adds dollars.
When the total is found, the hole in the red on the outer ring will be at a number which will be the balance of 100. If, for instance, the number on the outer ring is 47 at the opening, the hole in the red will be at 53 and shows the cents of the change to be given if the amount received has been one dollar.
Add the cents first. About three sums of cents can be taken at a glance. If needful, thus—24, 36, 19, and the like. The carrying being AUTOMATIC, the result is ALWAYS CORRECT if the right figures are moved.

George Phineas Gordon was born on April 21st, 1810 in Salem, New Hampshire. He went to school in New Hampshire and Boston before moving to New York. He became an apprentice printer and eventually opened his own printing shop in the early 1830s.

He began experimenting with trying to design his own printing press and after many failed attempts, he was finally granted a patent in 1851.  One of his first presses could print over ten thousand cards in one hour.

In 1858 he invented a new kind of press that he named the Franklin press, as he claimed Benjamin Franklin had explained the design to him in a dream one night. The press was eventually nicknamed the Gordon Press and was known for being safer to use than previously manufactured presses, which closed on the users’ fingers quite regularly. In 1872 Mr. Gordon started his own factory to manufacture his presses and accumulated a large amount of wealth.