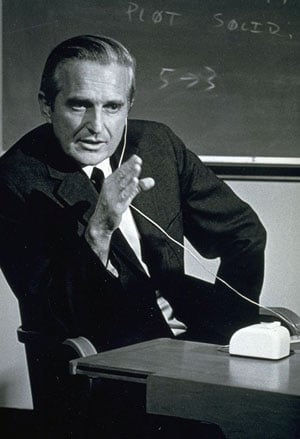 The NLS system of Douglas Engelbart

The name of the prominent American inventor and computer pioneer Douglas Carl Engelbart (biography of Douglas Engelbart) has already been mentioned several times in this site (see the first computer mouse).

Here we will mention only his system NLS as a first working hypertext system.

In the late summer of 1945, at the very end of World War II, a young 20 years old US Navy radar technician in the Philippines—Douglas Engelbart, went to the local Red Cross library and picked up a copy of the Atlantic Monthly journal from July, 1945. There he stumbled upon an interesting article, namely Vannevar Bush’s work As We May Think, presenting his “memex” automated library system. The young Douglas was profoundly influenced by the Bush’s vision of the future of information technology.

Engelbart demonstrated creating links between three sample sentences, mentioning: “Here is one standard portrayal, for which I have established a computer process to do the structuring automatically on the basis of the interword links.”…
He aimed at a term with the light pen and hit a few strokes on the keyset, and the old text jumped farther out of the way and the definition appeared above the diagram, with the defined term brighter than the rest of the diagram. And he showed you also how you could link secondary phrases (or sentences) to parts of the statement for more detailed description. These secondary substructures wouldn’t appear when you normally viewed the statement, but could be brought in by simple request if you wanted closer study…
It proves to be terrifically useful to be able to work easily with statements that represent more sophisticated and complex concepts. Sort of like being able to use structural members that are lighter and stronger—it gives you new freedom in building structures…

In the same 1962 Engelbart hired a small team of researchers to develop a demonstration hyper collaborative knowledge environment system called NLS (for oNLine System), first published (see the article for NLS) and publicly demonstrated in 1968. NLS system is difficult to describe, since it is a very richly comprehensive environment of tools and practices for facilitating any scale of heavy knowledge work. Engelbart used NLS for all its own knowledge work, from drafting, publishing, email, shared screen collaborative viewing and editing, document cataloging, project management, shared address book, and all source code development and maintenance—all in an integrated hyper groupware environment, filled with many special features for high performance work.

For example, the user can create a link to any paragraph or line of code or email paragraph, and he can see when paragraphs and lines of code were last edited and by whom, and even view a file filtered by author since a certain date and time (as in why doesn’t the code work this morning, let’s see who was in there changing what when!), he can browse with outline views, drill down into the structure of a document or source code and fly around with a number of precision browsing features and custom viewing features, and edit the structure as well as the text, within and across files and application domains.

Engelbart continued to evolve NLS under real world usage with a team of up to 47 researchers in his lab at SRI, cultivating a networked community of early customer IT pioneers via the newly formed ARPANET