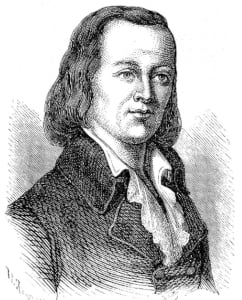 Amazingly, the parental house of Claude Chappe from 18th century is still preserved (see the lower postcard from 1900), on Nr. 1 Rue Claude Chappe, in Brûlon, Pays de la Loire, France, so most probably Claude was born in this house on Christmas day of 1763, a couple of hours before his twin sister Marie Marthe. Somewhere in this yard Chappe brothers made first experiments with the telegraph in 1791. 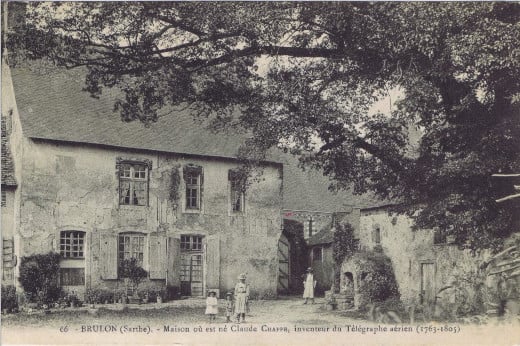 Claude’s father, Ignace Chappe d’Auteroche was born on 13 March 1724, into the noble family of baron Jean Chappe d’Auteroche (1675-1737), and Madeleine de La Farge (1698-1763), of Mauriac, Auvergne. According to the rules of nobility, the title baron passed to the eldest son of the family, Ignace’s brother Jean-Baptiste (who will play a significant role in the early years of Claude Chappe). 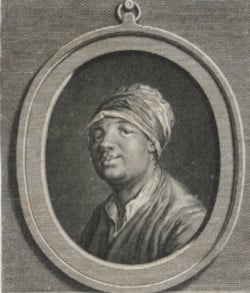 Ignace Chappe’s elder brother (see the nearby image), Abbé Jean-Baptiste Chappe d’Auteroche (23 Mar 1722–1 Aug 1769), was a prominent French astronomer, assistant astronomer at the Royal Observatory and member of the Royal Academy of Sciences.

The first book Claude Chappe read in his youth was his uncle’s journal of a 1761 trip, Voyage en Siberie, and later he may also have become familiar with the properties of telescopes. Claude’s brother, Abraham, wrote: Reading this book greatly inspired him, and gave him a taste for the physical sciences. From this point on, all his studies, and even his pastimes, were focused on that subject.

The young Claude was raised for the church, and received a good religious training. He first attended the College de Joyeuse in Rouen, then he moved to Collège Royal Henry-Le-Grand in La Flèche (the great René Descartes graduated from this college in 1616).

When Claude graduated from the college in 1783, he became an Abbe Commendataire and obtained two religious benefices, close to Paris—Saint-Martin de Châlautre and Baignolet, which provided him with few obligations and ample funds, which he used to create small home laboratory. One can ask—”Why a humble cleric needs a lab”? 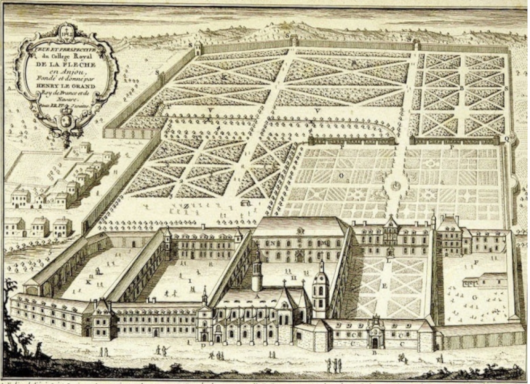 Perspective view of the Royal College (Collège Royal Henry-Le-Grand) in Flèche, where Claude Chappe graduated in 1783 (a picture from the middle of the 18th century)

The fact is that Claude showed a strong interest in science, not only as a child (there is a story, that one day at school he constructed a simple system for signaling messages with a pole and a ruler, which his brothers were able to see from home through a telescope), but also during his studies at the college. In his laboratory, Claude performed many experiments in physics (mainly in electricity), and published the results in several papers for Journal de physique, some written jointly with other physicists. He became acquainted with a group of physicists in Paris, and later in 1792 joined the prestigious scientific society Société Philomatique

When in July 1789 the French Revolution began, the rules of life changed in no time. A range of traditional privileges held by the nobility and the religious orders was abolished by a new Legislative Assembly. Claude Chappe lost his religious benefices and in early November 1789, he returned to Brûlon newly unemployed.

In the turmoil of the revolution, his brothers had also lost their jobs and returned to Brûlon (Ignace and Pierre-Francois worked as tax collectors, René was Receveurdes Domaines du Roi in Lassay, Abraham was, like Claude, raised for the church, and just graduating, he was still looking for his first assignment). Together the five brothers decided to set up a shop to work on telegraph (see the telegraph of Claude Chappe).

After the implementation of their telegraph, around 1800 Chappe brothers were at the peak of their success. Between 1800 and 1804, however, Claude Chappe became increasingly despondent. He was especially upset when other inventors started attacking his designs, claiming credit for having invented the telegraph earlier.

Towards the end of 1804, Claude Chappe fell ill during a routine inspection tour of some of the new telegraph lines (he was the head of French Telegraph Administration) that were under construction. He suspected food poisoning, and pointed an accusing finger at his adversaries. When he returned to Paris after a sickness of several months, he sank into a depression from which he didn’t manage to recover. On Wednesday 23 January 1805, Claude Chappe committed suicide by jumping into a well in the yard of the Telegraph Administration at l’Hôtel Villeroy in Paris. 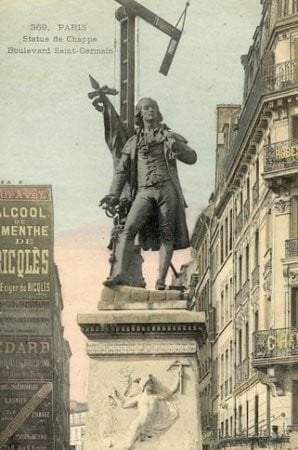 The bronze monument of Claude Chappe in Paris. Erected in 1893, it was demolished and melted down in 1942.

In 1893, at the first centennial of the telegraph, a bronze monument of Claude Chappe was erected in Paris (see the upper image), at the crossroad of boulevards Raspail and Saint-Germain, near the Rue du Bac, where Chappe had his first workshop. It was demolished and melted down for ammunition in 1942, during the Nazi occupation.