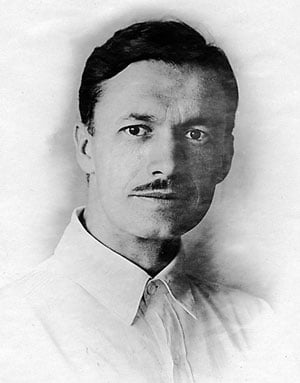 Vladimir Sergeevich Lukianov (Владимир Сергеевич Лукьянов) was born in Moscow, on 17 March 1902, in the family of an insurance agent. In 1919 he graduated from a Moscow classical high school and entered the building department of the Moscow State University of Railway Engineering. He graduated in 1925 and was sent to build the railroads Troitsk—Orsk, and Kartaly—Magnitnaia. After working for five years on the construction and design of railways, in 1930, Lukianov went on research activities in the Central Institute of Railway Engineers in Moscow, where he worked on the calculation of temperatures in concrete structures.

He began to study temperatures in concrete cells, but current methods of calculation could not provide quick and accurate solutions to complex differential equations that describe the temperature, and the analytic solution required many assumptions.

Searching for a new approach to the problem, Lukianov applied the method of analogies between different physical processes, and in 1934 proposed a fundamentally new way of mechanization of transient calculations—the method of hydraulic analogies. The result was the creation of a kind of model of thermal processes—the so-called Hydraulic Integrator

The first model (one-dimensional) of the Hydraulic Integrator was created in 1936, the so-called ИГ-1 (Интегратор Гидравлический 1). It was a primitive device made of roofing iron, tin, and glass tubes, but it successfully resolved the problem of investigating the concrete temperature regimes. Moreover, it was the world’s first water-driven calculating machine, as well as the first computer for solving differential equations in partial derivatives. 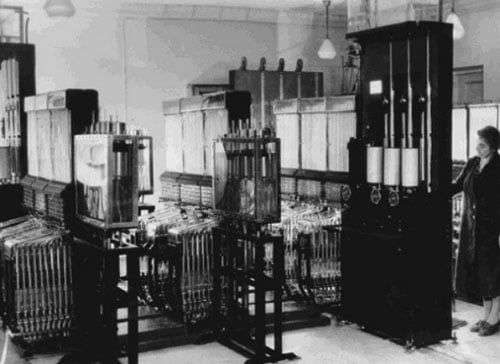 The Hydraulic Integrator of Vladimir Lukianov (a three-dimensional version)

Its main node is vertical (main) vessels of sizable capacity (in the right part of the upper photo, in front of the operator), interconnected by means of tubes with variable hydraulic resistance and connected to moving vessels. By raising and lowering them, the operator can change the water flow in the main vessels. The start or stop of the process of the calculation is made by means of cranes with common control.

Solving a problem using the Hydraulic Integrator needed some preparation:

1. Create a design scheme for the test process

2. On the basis of this scheme produce a compound of vessels to identify and choose the values of hydraulic resistances of the tubes

3. Calculate the initial values of the quantity to be searched

4. Draw a graph of the external conditions of the simulated process

After the preparation steps, the operator should set the initial values: fixed and mobile cranes in closed vessels must be filled with water to the calculated levels and then noted on graph paper attached for piezometers (measuring tubes)—It turns out a kind of curve. Then all the valves must be opened simultaneously, and the operator must change the height of moving vessels in accordance with the schedule of changes in the external conditions of the simulated process. At the same time, the water pressure in the main vessels was changed by the same law as the temperature. The liquid level in the piezometers changed, and at the right time valves must be closed, stopping the process, and graph paper will mark a new level positions. These marks have to be plotted, which will be the solution. 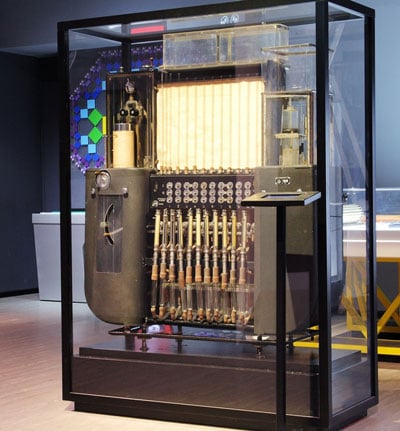 Two Hydraulic Integrators of Vladimir Lukianov are currently presented in the collection of analog machines of the Moscow Polytechnic Museum (see the upper image).

Vladimir Lukianov was a professor and doctor of technical sciences and a holder of the State (Stalin) Award of 1951. He died in 1980 in Moscow.