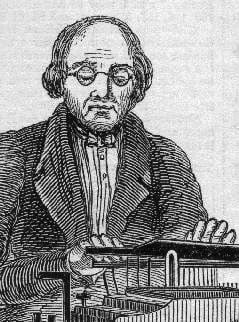 The German Joseph Faber, born around 1800 in Freiburg Breisgau, near Schwarzwald, came at a young age to Vienna, where he attended school and then entered the Imperial-Royal Polytechnic Institute, to study mathematics. He was fond also of occupying himself with physics and music.

In the early 1820s, recovering from a serious illness, he fell into a state of hypochondria, from which (against the advice of doctors) he could only free himself by undertaking mechanical tasks. So at first, he applied himself to wood-carving, when Wolfgang von Kempeler‘s book for his speaking machine (“On the Mechanism of Human Speech”) came into his hands, he got the idea of constructing a talking machine.

In order to carry out his work, for which he needed peace and quiet, Faber left Vienna and moved back to his hometown, where after severe privations and countless demonstrations of patience he brought about a work the like of which nobody before him, even his inspirer Kempelen, has accomplished.

In USA Faber struggling to earn a living and learn to speak English, recreated his “Wonderful Talking Machine” and showed his invention in New York City in early 1844. The scientist and Director of the U.S. Mint Robert M. Patterson saw it and was impressed. Patterson even spoke about the automaton to the American Philosophical Society in May 1844 and tried to raise financial backing for Faber but, discouraged, the inventor destroyed his machine.

In 1845 Patterson accompanied his fellow—the famous American physicist Joseph Henry (the inventor of electromechanical relay) to Faber’s workshop where he was re-assembling his talking machine, this time with a female face. Henry, who was often asked to distinguish fraudulent from genuine inventions, agreed to go with Patterson to look at the machine. If an act of ventriloquism was at work, he was sure to detect it.

Instead of a hoax, however, which he had suspected, Henry found a “wonderful invention” with a variety of potential applications. “I have seen the speaking figure of Mr. Wheatstone of London,” Henry wrote in a letter to a former student, “but it cannot be compared with this which instead of uttering a few words is capable of speaking whole sentences composed of any words whatever.” Henry encouraged Faber to continue and to demonstrate its capabilities at the Musical Fund Hall in Philadelphia in December 1845. However, that showing was another failure.

Henry observed that sixteen levers or keys “like those of a piano” projected sixteen elementary sounds by which “every word in all European languages can be distinctly produced.” A seventeenth key opened and closed the equivalent of the glottis, an aperture between the vocal cords. “The plan of the machine is the same as that of the human organs of speech, the several parts being worked by strings and levers instead of tendons and muscles.”

Henry, who in 1831 had invented a demonstration telegraph while pursuing his electromagnetic investigations, believed that many applications of Faber’s machine “could be imagined” in connection with the telegraph. “The keys could be worked by means of electromagnetic magnets and with a little contrivance not difficult to execute words might be spoken at one end of the telegraphic line which has their origin at the other.” A devout Presbyterian, Henry even seized upon the possibility of having a sermon delivered over the wires to several churches simultaneously. 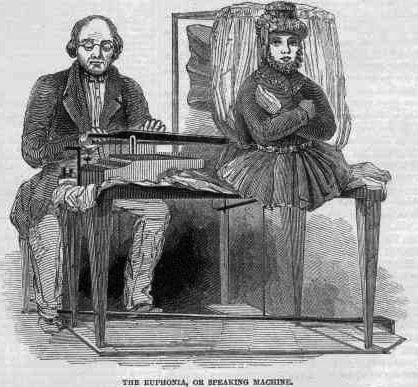 The Euphonia of Joseph Faber

In 1846, Phineas Taylor Barnum (an American showman, businessman, scam artist, and entertainer, remembered for promoting celebrated hoaxes) looking for a fresh novelty, contacted Faber, named the speaking automaton “Euphonia” and took the inventor to London, where the machine was exposed at the Egyptian Hall. “A complex device controlled by seventeen levers, a bellows, and a telegraphic line, this machine was adorned with the movable replica of a human face, which was able to faithfully replicate the sounds of human speech”. At the exhibition, Faber made the Euphonia sing a haunting rendition of God Save the Queen.

As author David Lindsay described it, “By pumping air with the bellows… and manipulating a series of plates, chambers, and other apparatus (including an artificial tongue…), the operator could make it speak any European language.” Separate levers controlled the movements of the tongue, lips, jaw, and vocal cords.

People remarked that they could even feel the breath of the “Euphonia” emanating from the Indian rubber lips set into a “stoney-eyed” mask of a female face, but that was because the basic driver of the apparatus was a large bellows operated by a foot-pedal. The compressed air was driven through a collection of reeds, whistles, and whoopie-cushion-type resonators, modified by various shutters and baffles, and these were controlled individually or in concert by the board of 17 keys or levers.

The 16 or 17 elemental sounds could be combined to sound out words and phrases—”the letters represented on the keyboard were A, O, U, I, E, L, R, W, F, S, Sh, B, G, and these were declared by the professor to be all that was necessary, with the judicious opening and closing of the rubber lips to produce all combinations of sounds known to the phonetic economy”. The speaking was, not surprisingly, slow and deliberate. 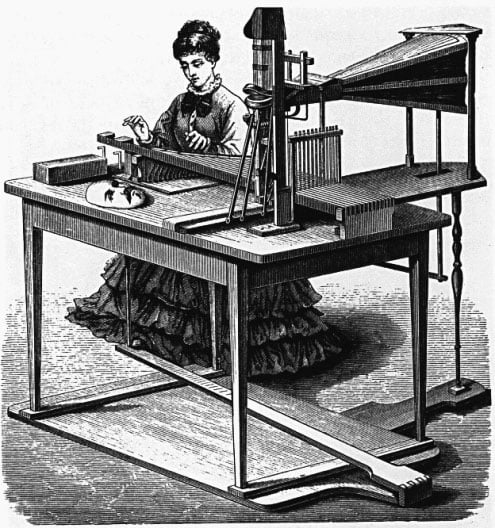 For the inventor and his machine, the London theater manager John Hollingshead provided the most complete, but also the most depressing description:
“The exhibitor, Professor Faber, was a sad-faced man, dressed in respectable well-worn clothes that were soiled by contact with tools, wood, and machinery. The room looked like a laboratory and workshop, which is was. The Professor was not too clean, and his hair and beard sadly wanted the attention of a barber. I had no doubt that he slept in the same room as the figure—his scientific Frankenstein monster—and I felt the secret influence of an idea that the two were destined to live and die together. The Professor, with a slight German accent, put his wonderful toy in motion. He explained its action: it was not necessary to prove the absence of deception. The keyboard, touched by the Professor, produced words which, slowly and deliberately in a hoarse sepulchral voice came from the mouth of the figure, as if from the depths of a tomb. It wanted little imagination to make the very few visitors believe that the figure contained an imprisoned human—or half-human—being, bound to speak slowly when tormented by the unseen power outside. No one thought for a moment that they were being fooled by a second edition of the “Invisible Girl” fraud. There were truth, laborious invention, and good faith, in every part of the melancholy room. As a crowning display, the head sang a sepulchral version of “God save the Queen”, which suggested inevitably, God save the inventor. This extraordinary effect was achieved by the Professor working two keyboards—one for the words, and one for the music. Never probably, before or since, has the National Anthem been so sung. Sadder and wiser I, and the few visitors, crept slowly from the place, leaving the Professor with his one and only treasure—his child of infinite labor and unmeasurable sorrow. He disappeared quietly from London and took his marvel to the provinces, where it was even less appreciated. The end came at last, and not the unexpected end. One day, in a dull matter-of-fact town—a town that could understand nothing but a Circus or a Jack Pudding—he destroyed himself and his figure. The world went on just the same, bestowing as little notice as it had on his exhibition. As a reward for this brutality, the world, thirty years afterward, was presented with the phonograph.”

Even after being promoted by Barnum (Euphonia remained a part of Barnum’s repertoire for the next several decades), Faber and his Euphonia generated little profit and received minimal respect, often finding themselves the subjects of mockery. One of the Euphonia’s few devotees was a Scottish professor of speech named Melville Bell. His son, the famed Alexander Graham Bell, made various attempts to reproduce speech, the most successful of which resulted in his device known as the telephone. 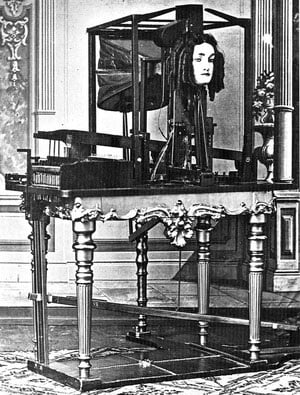 The Euphonia of Joseph Faber at Barnum’s Museum in New York, circa 1860

After taking Faber to London for the Egyptian Hall exhibition, Barnum showed it at his American Museum of curiosities in New York City, where Mathew Brady’s studio photographed it (see the upper photo), c. 1860, and later in his touring circus. Faber’s talking machine was still being shown in Barnum’s Circus when it played at the Exhibition Grounds on Grenville Street in Toronto in August 1874. The newspaper Toronto Mail noted large crowds around the machine but observed that it must have had a cold or a dislocated jaw because all of its words sounded monotonous and similar.

Sadly, Joseph Faber ended his life tragically around 1850, when he committed suicide.