The Jacob (Jakob) Auch, a German mechanic and clock-maker, is well known to us for his remarkable calculating machine.

At the age of 16 Jacob became an apprentice to Philipp Matthäus Hahn and served under him from 1781 till 1790. Later Jacob Auch proved himself as one of the most talented apprentices of Hahn and continued the work of his mentor with aplomb.

On 11 July, 1787, Auch married to Eva Regina Wintermantel, a daughter of Johann Christoph and Anna Maria Wintermantel in Vaihingen an der Enz, and opened his own workshop in the same city. They had one son, Johann Jacob Auch (1789-1885).

Auch spent the next 10 years of his life in Vaihingen, and during this period he fulfilled many orders from the professor of mathematics and physics from Institute of Physics in Karlsruhe Johann Lorenz Böckmann. 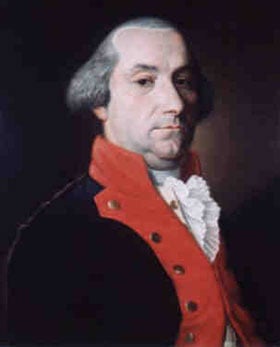 In 1798, Auch was hired as a ducal court mechanic (Großherzoglichen Hofmechanicus) at the Weimar court, a prestigious position, which he held until his death in 1842. As court mechanic for the Duke of Weimar he worked mainly for the new Seeberg Observatory from 1798 on. The renowned astronomer Baron Franz Xaver von Zach, headed the observatory until 1806 and was one of Jacob Auch’s most important patrons. Auch supplied numerous watches and instruments for the observatory, which was at the time the most modern in Europe.

Auch is well known as the author of two books on watchmaking—Taschenbuch für Uhrenbesitzer (Weimar, 1806) and Handbuch für Landuhrmacher (Weimar, 1827). The latter was published first time in 1827 and reprinted many times during the next century (see the book of Auch).

Besides his calculating machine, Auch is also known as a maker of many clocks and chronometers, besides the instruments for the Seeberg Observatory (including a telescope for Johann Wolfgang von Goethe). Auch created important astronomer’s pocket watches in the style of his master Philipp Hahn, with dials on both sides; they had the traditional watch on one side and Planetaria, an instrument mimicking the motions our solar system, on the other. 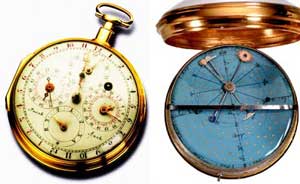 Here is one of the surviving double-dial astronomical watch made by Jacob Auch.

Jacob Auch died on 20 March, 1842, in Weimar. He was inherited by his son, Johann Jacob Auch (1789-1885), who started from 1821 in his Weimar workshop, and began to build mainly tower clocks according to a completely new functional principle.