More then half a century before the extraordinary machine drawings of Leonardo da Vinci, the first technology manuscript of the Italian Renaissance was produced by a Venetian scholar and engineer—Giovanni Jacopo Antonio de la Fontana (known also as Johannes Fontana de Venetiis).

Giovanni Fontana was born in the early 1390s in Padua (or in Venice), in the craftman’s family of Michele from Venice. He spent his youth in Venice or in the surroundings. From the records of the University of Padua it is known, that he attended the University from 1417 until 1421 and received a degree in arts in 1418 and degree in medicine in 1421.

University records list him as Master Giovanni, son of Michele de la Fontana, though later Fontana claims that in his youth he made inventions, built organs, and especially designed advanced fountains, whence his nickname Fontana

Fontana was promoted at the University of Padua by the scholastic scientist Paolo Nicoletti da Udine, known also as Paul of Venice, (c. 1370-1429), who was a professor of logic and philosophy in Padua from 1395 until 1420. Paolo tells us that the Doge of Venice sent him to Brescia to deliver a message to the condottiere Francesco Carmagnola.

It seems Fontana spent rest of his life as a physician, appointed first as a physician to the Venetian army in Brescia, and later after 1438 as the municipal physician by the city of Udine. Fontana had at least one son, named Ottaviano. The date and place of Fontana’s death are still unknown, probably around 1455-1456.

Fontana had a wide range of interests and studied mechanical arts from the Greek and Arabic texts, reading historical works on optics, astrology and alchemy (intrinsic medical studies back then), pneumatic and hydraulic mechanics, military machines and the art of memory.

Besides his interest of such devices, Fontana applied his knowledge to analyze some natural phenomena, e.g. to produce a treatise on perspective, which he presented to the painter Jacopo Bellini.

In the early 1420s, Fontana’s career in Padua must have been struck down by accusations of witchcraft. When witnesses at Padua exclaimed that a torpedo he had designed must run by diabolic power, he refuted them with contempt: the device was purely mechanical, as befitted a maker who was also a master of both medieval Archimedean statics and optics and of Renaissance engineering craft.

The title of the above mentioned treatise is a little misleading or at least fails to take into account the wide range of technologies included in the 70 folio pages (with some 140 illustrations). Fontana’s Bellicorum instrumentorum features, among others, siege engines, fountains and pumps, lifting and transporting machines, defensive towers, dredges, combination locks, battering rams, rocket-propelled animals, the first ever depiction of a magic lantern, scaling ladders, measuring instruments, alchemical furnaces and the most interesting in the context of this site—several robotic automata (see the images below). 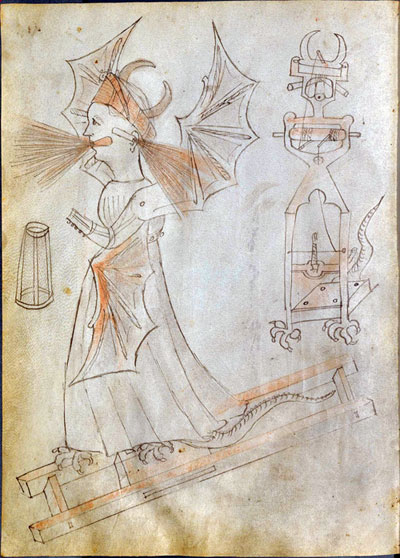 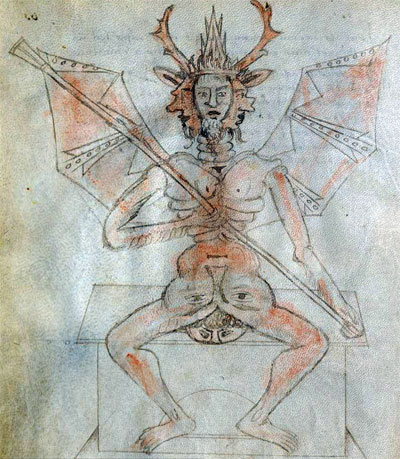 Almost each picture in Bellicorum instrumentorum is accompanied by a few lines to a couple of paragraphs of text. The first sentence is usually in Latin with the remainder written in a substitute cypher system. There are probably various reasons that account for why the text was encoded, although secrecy is unlikely to have been the main priority.

There was something of a magician in Fontana (who even portrayed himself as a magus), who is thought to have built toy models of a few of the automata, so projecting a veil of esoteric mysticism will have appealed to his desire to amaze readers.

Coded writing may also have offered a form of copyright, providing one level of difficulty for any unauthorized copying. As Fontana’s only other extant manuscript (Secretum de thesauro experimentorum ymaginationis hominum), devoted to mnemonic devices, memory and natural philosophy experiments, was also drafted in the same code, it is speculated that the author considered the code a symbolic writing system that conferred particular significance on the contents.

Most probably Fontana was, as his predecessor Villard de Honnecourt, not a genuine inventor, but simply a clever and curious man, who managed to brought together a range of many known technologies, drawn from Ctesibius of Alexandria, Philon of Byzantion, Archimedes, etc. up to the medieval Arabic scientists like Al-Jazari and Al-Kindi, augmented with Fontana’s own, sometimes fanciful, designs and dared to present them in an accessible format as a kind of a technical manual. 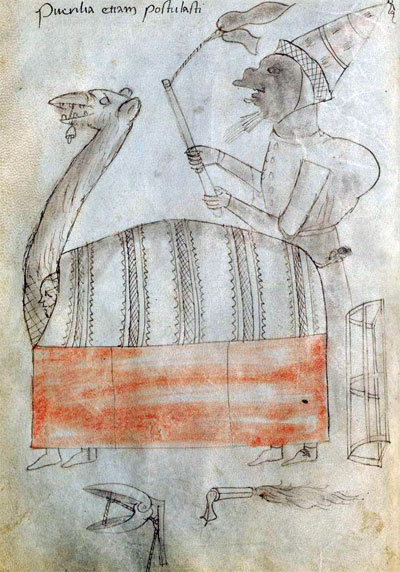 Moreover, around 1430 in the already mentioned encrypted writing “Secretum de thesauro experimentorum ymaginationis hominum” Fontana investigated the different types of memory, and explained the functions of the artificial memory.

He proposes some memory devices and “machines”, having a fixed structure (wheels, spirals, cylinders) and a mobile and variable part allowing to change the combinations of signs within this system, a engineer’s realization of the Lullian dream