George B. Fowler was born in Long Island in 1834. In early 1860s he was a resident of Chicago, Illinois. By 1864 he had settled in New York City, opening a company to produce his adding device. In late 1860s he was a patent agent in Brooklyn.

In 1860s the machine was advertised as the only practical and reliable adding machine in the world, and was reported to be on market since 1869, produced by the company of its inventor—Geo. B. Fowler & Co., Chicago, IL (see the upper photo).

Fowler garnered testimonials from lumber dealers, bookkeepers, and insurance companies, and hoped to find agents who would pay substantial sums to market his machine, but there is no indication that this occurred.

The machine (see the lower drawing from the first patent) was a slide bar adder, operated by pin or pencil. It was a wood and metal device, with measurements: 1 cm x 22.5 cm x 11.5 cm. 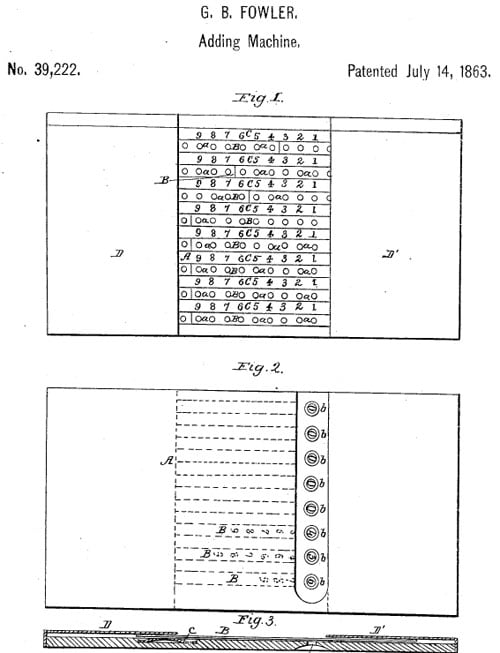 The patent drawing of Fowler’s Adder

If the hole is on the dark portion of the slide, then the said slide has to be moved leftward, instead of rightward. The result of operation is ascertained by turning the platform upside down and noticing the figures appearing on the under side of the slides opposite to the apertures (see the lower image) in the platform.

The result apertures of Fowler’s Adder.