The Adder of Arthur James Postans

The British engineer Arthur James Postans (1867-1940) from South Kensington, London, applied for a patent for an adding machine in 1902 in several countries. The British patent №GB190224868 (see the lower patent drawing) and the German patent were granted in 1904. The next year Postans obtained a US patent also (patent №786839). Later Postans received patents for the same device, or improved devices, in Canada, Switzerland, Sweden, and 3 more British patents.

The patent describes an adding machine in which the depression of keys having on them the index-numbers moves a series of drums in such a way that the number formed by the position of numerals on their peripheries and appearing through an opening in the casing is increased to the extent of the number appearing on the key that has been depressed. 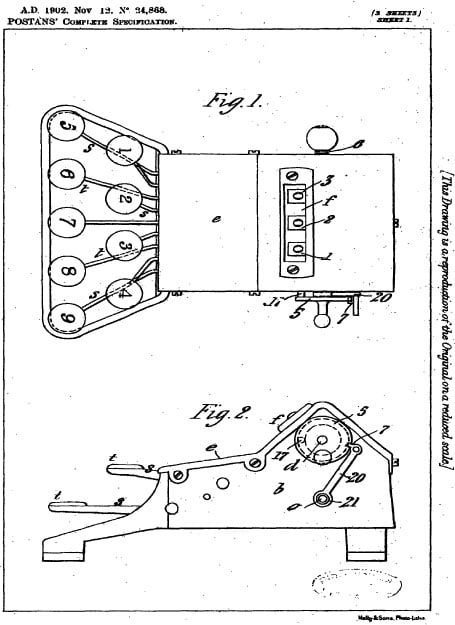 The Adder was a single-column single-axis adding machine with three results dials and a ten-key setting mechanism. The three dials are mounted side by side behind the window at the top of the machine. The setting keys are numbered from 1 to 10 and operate on the right-hand (units) dial only. An automatic tens-carry mechanism advances the tens and hundreds dials as required. The clearing lever at the left-hand side returns the three dials to zero. 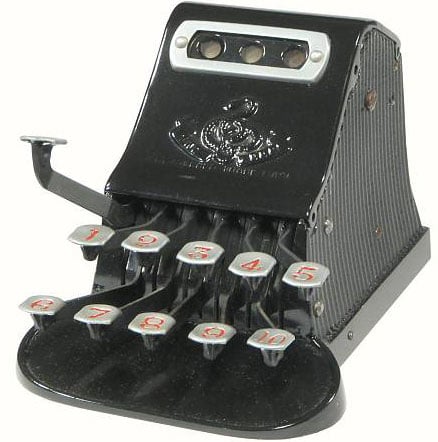 Arthur became an experimental engineer and starting from the mid-1890s he was granted numerous patents not only for adding machines, but also for other devices like driving gear for velocipedes, electrical ignition apparatus for internal-combustion engines, safety razors, zeroing mechanisms, a stropping machine for razors, an indicator for cash-registers, a printing mechanism for cash-registers.

Arthur’s brother, John Musgrove, was educated at an Ipswich boarding school before following his father and grandfather’s footsteps as a farmer. He won a gold medal in shooting at the 1908 Olympic Games in London.