Warcraft is a hugely successful video game franchise made and published by Blizzard Entertainment. There are also novels, a film, and other media related to the franchise, but video games are the most popular.

The history of the Warcraft franchise is a fascinating journey that spans decades, and you will learn all about it here.

The first game in the Warcraft franchise was Warcraft: Orcs & Humans, which Blizzard Entertainment released on the 15th of November, 1994 for MS-DOS and subsequently in 1996 for Mac OS.

Even though this first installment of Warcraft was not the first real-time strategy game to hit the video gaming scene, it did much better than others that came before it.

The reception Warcraft: Orcs & Humans received was phenomenal. Blizzard Entertainment sold well over 300,000 copies. The Warcraft franchise would eventually gross over $11 billion in sales by 2018.

In the first-ever Warcraft game, Orcs flood Azeroth through a portal opened by a magician named Madivh from their dying world. Led by Warlock Gul’Dan, the Orcs aim to rid the humans of the land so they can settle it. In the end, the human city-state of Stormwind is destroyed, and the humans flee to the Kingdom of Lordaeron.

Warcraft: Orcs & Humans takes place in a fantasy, medieval setting. It was designed as a real-time strategy game where players could play as humans or Orcs. The single-player campaign took players through various missions where they had to build and fortify their town, obtain resources, put together an army, and fight to win against the enemy.

Surprisingly for the time, Warcraft: Orcs & Humans had a multiplayer mode where players could compete against one another via dial-up modem or a local network.

Following the success of Warcraft: Orcs & Humans, the second franchise installment was released in 1995. Warcraft II: Tides of Darkness was critically acclaimed and won many awards. An expansion pack, Warcraft II (Beyond the Dark Portal), was unleashed in 1996 for PC and Mac OS and then the following year for the Sony PlayStation and Sega Saturn.

By 1998, Warcraft II: Tides of Darkness had sold over a million units and made Blizzard nearly $40 million. At this point, it was clear to anyone in the gaming industry that the Warcraft franchise and Blizzard were here to stay.

After enslaving Red Dragons, Doomhammer leads his horde against the Kingdom of Lordaeron. Unfortunately for the Orcs, the human survivors of Stormwind band together with other human kingdoms (the Alliance), making them too strong for the Orcs to overcome.

Doomhammer and his horde flee to the Hinterlands, where he finds the Amani Trolls and makes a pact with them. After failing to defeat the High Elves of Quel’Thalas, the Orcs make another attempt at taking Lordaeron and fail. They are chased south by the Alliance to their portal and retreat through it to their world.

The end of the second war presents us with the humans as victorious. They rebuild Stormwind, and that is where the game ends.

In Warcraft II: Tides of Darkness, players can choose a campaign where they compete against an AI opponent or participate in multiplayer mode with up to 8 players.

To win the campaign or multiplayer mode, players must collect resources to build up their town and army units as quickly as possible.

The third part in the history of Warcraft was inevitable and was released in July 2002 to incredible fanfare. Over a million copies were sold within a month of its release, making Warcraft III: Reign of Chaos a much bigger hit than the previous two chapters of the history of Warcraft. Most critics at the time praised the game as highly innovative.

In 2003, an expansion, the Frozen Throne, was released.

In Warcraft III: Reign of Chaos, we are immersed in the third war between humans and Orcs.

The game first focuses on the Orc leader, Thrall, who wakes from a nightmare where he is warned about the return of the Burning Legion, a huge demonic army. After meeting “the Prophet” and realizing that the warning was genuine, he leads the Orcs to the forgotten lands of Kalimdor.

The story goes on with Prince Arthas, who sets off to investigate a plague that turns humans into undead monsters. Arthas is aghast at what he finds, declares that the city must be purged, and slaughters all the infected citizens. Arthas goes on a quest to hunt the demons responsible for the plague. He finds a cursed sword and comes under the command of the evil Lich King as an undead knight.

Sylvanas Windrunner, the Ranger-General of the High Elves, comes into the story at this point. Arthas kills her, and her soul is turned into a banshee until she breaks free from the influence of the Lich King. Sylvanas claims the ruined city of Lordaeron and declares her people as “the Forsaken.”

Fans of the franchise and the history of Warcraft were pleased to discover that in Warcraft III: Reign of Chaos, they would play not just as humans or Orcs but also as Night Elves and the Undead Scourge. Each faction has different missions to complete as the story evolves.

In campaign mode, players must develop a settlement while collecting resources and building up their army to complete current main and side quests.

The multiplayer mode is more straightforward because the only objective is to destroy the enemy’s buildings. Although playing online against real opponents can be much more challenging than against AI in campaign mode. Multiplayer was hosted on the Battle.net Network, where players would be matched with random opponents or could choose to play with friends via arranged team games.

World of Warcraft (WoW) changed not just the history of the Warcraft franchise but also the gaming world. This next installment in the history of Warcraft was an MMORPG where players could explore a vast open world in either third-person or first-person perspective. This dynamic set it apart from the previous Warcraft games and expansions.

Just as Warcraft: Orcs & Humans was not the first-ever RTS game but did change the genre, World of Warcraft was not the first MMORPG but set the standard for every other game of its type to come.

WoW was released by Blizzard Entertainment in 2004 and was an immediate success, eventually bringing in billions in revenue for the company. At the peak of its success (generally regarded as 2010) World of Warcraft had over 12 million subscribers paying a monthly fee.

WoW has changed in various ways since its initial release, thanks to eight expansion packs.

In World of Warcraft, Thrall and his Orc horde join ranks with Tauren and Trolls to battle against the Alliance of Humans, Dwarves, Gnomes, and Night Elves.

Despite being set in a 3D representation of the Warcraft universe, WoW does not progress through a similar story. Instead, ongoing gameplay is the game’s name in a vast and beautiful 3D world.

Players begin by designing their avatar and choosing to be either part of the Alliance or the Horde. A race within the chosen faction must be chosen as well. Players then enter the vast WoW world according to the chosen server.

Gameplay mainly consists of leveling up one’s character through quests that reward players with experience points or valuables, including in-game currency. The objective in successive quests usually involves gathering resources, locating precious objects, interacting with others, or slaying creatures. There are also multiplayer quests. 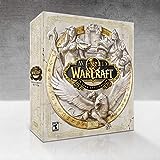 World of Warcraft is exceptionally different from the games in the history of Warcraft, but Hearthstone is even more. This game is set in a Warcraft universe but is played with cards.

Blizzard Entertainment initially called this card game “Heroes of Warcraft” but changed the name and released it in 2014.

Despite being so different from other Warcraft games, Hearthstone has enjoyed tremendous popularity and success since its release. Blizzard has reported revenue of almost $40 million per month since 2017 and more than 100 million player accounts. One thing that draws so many players to Hearthstone is its cash prize tournaments hosted by Blizzard itself.

In Hearthstone, two players go against one another. Each player must select a hero from 10 different classes. Each opponent then uses a deck of cards to outperform the other and bring their health down to nothing to win.

Arguably, Warcraft III was the most beloved game of the franchise. Fans clamored for years for a remake. Finally, on November 2, 2018, Blizzard announced at BlizzCon – an annual gaming convention – that made fans cry with joy. Warcraft III would be remade and entitled Warcraft III: Reforged.

Blizzard stated that the remake would be available in 2019, but this was not to be. Warcraft III was not released until January 28th, 2020.

Expectations for this Warcraft III remake were high, and they were far from met. Blizzard failed to deliver the quality many were hoping for and removed key features that angered fans. Initial sales were high but came to a grinding halt as word spread about what was seen as a failure and possibly even fraud by Blizzard. At that point, Metacritic gave Warcraft III: Reforged its lowest review score ever.

Blizzard Entertainment eventually responded by offering refunds and doing what it could to undo the damage. Reforged still has a solid fan base, but it is not what it might have been since many fans accepted a refund, and others were unwilling to buy the game due to the controversy.

The history of Warcraft holds a special place in video game history. Both players who have been there since the beginning and those who are utterly new to Warcraft love diving in for more action regularly. Despite mistakes made by Blizzard Entertainment throughout the years, there is no doubt that we will continue to see more Warcraft content well into the future.

When was Warcraft released?

The first game in the Warcraft franchise, Warcraft: Orcs & Humans, was released on November 15, 1994, by Blizzard Entertainment.

How many Warcraft games are there?

What are the system requirements for World of Warcraft?

How much is World of Warcraft per month?