The patent model of the device (see the lower photo) survived to our time and is kept now in the collection of National Museum of American History in Washington, D.C. 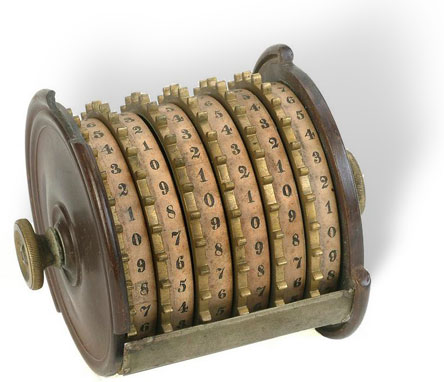 The machine is a lever-set adding device, featuring a frame of two brown round end pieces joined by a central shaft and by two handles of brass at the outside. The shaft carries six toothed wheels that may be rotated with the fingers. Each wheel has 30 teeth and is joined to a brass ring on its right (thus implementing a carry mechanism). Around the rim of each ring is a slip of paper with the digits from 0 to 9 printed on it three times. One third of each ring is covered by a metal piece whid a window at the bottom and the digits from 1 to 9 engraved on it.

To enter digits, the operator must rotate wheels forward the distance indicated by these digits. The total appears in the windows. 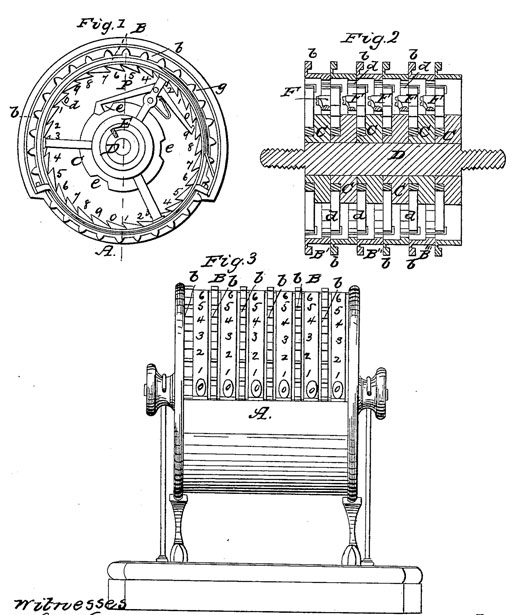 The patent drawing of adding machine of Milton Jeffers

The Macintosh, or Mac, is a series of several lines of personal computers, manufactured by Apple Inc. The first Macintosh was introduced on January 24, 1984, by Steve Jobs and it was the first commercially successful personal computer to feature two … END_OF_DOCUMENT_TOKEN_TO_BE_REPLACED