Six Facts About World of Warcraft

For more than 18 years now, World of Warcraft has remained one of the most successful MMORPG titles in the history of gaming. Not only has it sold over 14 million total copies but the game still somehow managed to become relevant in this day and age. That’s why we’re going to cover the World of Warcraft’s history and talk about everything you need to know about the history of WoW.

Why Was World of Warcraft Created?

At the time of its development, there weren’t a lot of good MMOs that could be played and enjoyed in the most user-friendly way. The story of World of Warcraft started when the company decided to make an MMO that would make the gamers’ experience better in terms of gameplay. This is where Blizzard Entertainment decided to establish a world where everyone would be able to co-exist and survive in a world full of heroes, gods, monsters, and villains.

And even though game development was quite a hard thing, especially in the golden era of gaming, World of Warcraft stunned everyone with its interesting approach and unique gameplay.

From 1998-2004, World of Warcraft was in its pre-release phase. Even in the late 90s, Blizzard Entertainment’s crew was already in mad love with the idea of MMOs. So, they decided to take inspiration from games like Everquest which ultimately gathered their fans as well. There were a lot of tweakings and improvements involved which the World of Warcraft crew implemented slowly by surely.

The premise was simple, players would have to enter a zone, find various quests, and live a life full of thrill. And with a lot of trial and error, the company didn’t let it phase their development stage. The visual design of WoW was drawn as paper sketches and finally, the company had a complete design for the game and it was ready to be released.

After years of hype and testing different designs, Blizzard Entertainment released World of Warcraft on November 23rd, 2004 in Australia and North America. The game was introduced in Europe in 2005. The initial response was great and fans loved the idea of WoW. Sales were booming and the company even received some awards.

So naturally, the team should be happy, right? Well, not really. Blizzard Entertainment went into panic mode with the idea that they made a game with no end. They weren’t prepared for the game from the hardware side of things. In all honesty, the company wasn’t expecting such a huge user base and the server maintenance remained a tough task for them.

The technical director of World of Warcraft still remembers the time when he had to join Blizzard Entertainment at a panic hour. In December of 2005, Patric Dawson joined the team as a technical director and he was tasked to make sure that the servers remain up and running. Dawson not only made the server side of things good but he also wanted to introduce cross-server functionality.

This went down as a memorable moment in the history of Warcraft as innovation was at its peak. Now, the company was ready to launch its expansion packs that would enhance the capabilities of the game. So, let’s talk about each expansion and what it brings to the table for all the fans out there.

Where To Buy World of Warcraft?

A total of 8 expansions were released. Each expansion brought something new for the fans.

The first expansion set in the history of World of Warcraft, The Burning Crusade was released on January 16, 2007, in Europe and North America. This expansion pack sold over 2.4 million copies on just the release date, making it one of the fastest-selling PC games at the time of its release.

World of Warcraft: Wrath of the Lich King

The second expansion pack of World of Warcraft was called World of Warcraft: Wrath of the Lich King and it was released on November 13, 2008. This expansion set sold over 2.8 million copies within the first day, beating The Burning Crusade’s number.

Players had to reach level 68 and the level cap of this expansion was at level 80. In Wrath of the Lich King, the first hero class was introduced called the Death Knight which started at level 55.

Cataclysm was the third expansion pack and it sold 3.3 million copies in a day. This expansion pack was released on October 12, 2010, and it included an overhaul of the game’s playing system. That’s why most gamers call it a major update since a lot of things were changed. 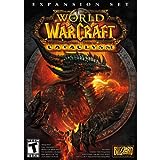 World of Warcraft: Mists of Pandaria

Mists of Pandari was the fourth expansion set that was released on September 25, 2012. It sold over 2.7 million copies within the first week and while it wasn’t their best-selling expansion, they introduced a new character class called the monk and a new race called the Pandaren.

World of Warcraft: Warlords of Draenor

This was the fifth expansion pack that was announced on November 8, 2013, at Blizzcon 2013. However, the main release was set for November 13, 2014. This time, the company broke its previous records by selling 3.3 million copies within the first 24 hours. The subscription increased from 7.4 to 10.5 which made a huge impact.

In the Warlords of Draenor expansion pack, the company introduced upgradeable garrisons, player-built, and improved the overall graphics of the game.

Legion was the sixth expansion set that was released on August 30th, 2016. It included a new area in Azeroth that was named Broken Isles. This expansion also introduced a demon hunter hero class that started at level 98.

The company sold over 3.3 million copies on the day of its release and broke previous sales records.

World of Warcraft: Battle for Azeroth

World of Warcraft: Battle for Azeroth is the seventh expansion pack that was released on August 14, 2018. It introduced two new continents and a total of four races for the Horde and Alliance, giving them a fresh new look.

The company did 3.4 million sales which broke the previous records. Things were going amazing for the company at that time.

The eighth expansion pack of WoW was released on November 23rd, 2020 after a month’s delay. This expansion introduced us to the Shadowlands which was essentially the realm of the death in Warcraft. There were some more upgrades, overhauls, and features that made fans quite excited.

On the first day, Blizzard did 3.7 million in sales, breaking records worldwide. Even though Shadowlands is technically the latest expansion pack, the company has already started working on the ninth expansion which is Dragonflight.

The Public’s Response To World of Warcraft

Upon its release, WoW was one of the most addicting and smooth MMOs out there. It was also quite easy for people to buy the game and a franchise with such strong gameplay was bound to be popular.

The game got so popular that Blizzard was having difficulty keeping its servers up and running. The initial response was quick and in a matter of months, the game became one of the most popular MMO games on Earth.

Compared to the time of its release, World of Warcraft has seen a decline but the company is still surprising the audience by releasing its expansion packs regularly.

World of Warcraft
Buy on Amazon

World of Warcraft proved time and time again that the company is doing something right for the fans. From their earlier server maintenance struggles to become one of the highest-selling PC games of all time, they’ve come a long way.

Blizzard is never going to start and as history has proven, they’re on the right path to breaking more records when it comes to their expansion sets.

The History of World of Warcraft FAQs (Frequently Asked Questions)

How many World of Warcraft games are there?

There are a total of eight expansion packs released to this date. However, the ninth expansion pack called Dragonflight is on its way.

How much did World of Warcraft cost to make?

The development cost of World of Warcraft was around $63 million. And if you include servers, maintenance, and the cost of upgrading, the number goes well over $200 million.

Will World of Warcraft end?

The game isn’t set to end anytime soon. This is because whenever a story ends, the company releases a new expansion pack which gives us new upgrades and new resources to play with.

How much did World of Warcraft make?

World of Warcraft made around $9.23 billion in revenue which makes it one of the highest-grossing games of all time.

Is World of Warcraft still popular in 2022?

As a professional writer obsessed with technology, I always keep myself updated with the latest tech news, trends, inventions, and more. I also love history and see how different people throughout contributed to the development of technology. My Python programming experience helps write and explain certain complicated topics as well. I have strong interests in Video Games, Science Fiction, Programming, The history of technology, Cybersecurity, and Space, although any topic is welcomed by me.