Antikythera (literally “opposite Kythera”, Kythera is the next bigger island) is a small Greek island lying on the edge of the Aegean Sea, between Crete and Peloponnese.

In April 1900, a group of Greek sponge divers found a wreck of an ancient Roman galleon at a depth of 60 meters off Point Glyphadia, Antikythera. They retrieved numerous artifacts, dated between 150 to 100 BC, including bronze and marble statues, pottery, unique glassware, jewelry, coins, etc. Between the valuable artifacts there was also an unattractive lump of corroded bronze and wood, which initially remained unnoticed for two years, but later caused a real sensation—the historians found, that it is a complex gear mechanism (sometimes called the first known analog computer). Technological artifacts approaching its complexity and workmanship did not appear for the next 15 centuries.

The mechanism (a set of 82 remnant fragments) has at least 30 gears and is remarkable for the level of miniaturization and the complexity of its parts, which is comparable to that of 14th-century astronomical clocks, built in several Western European towns. 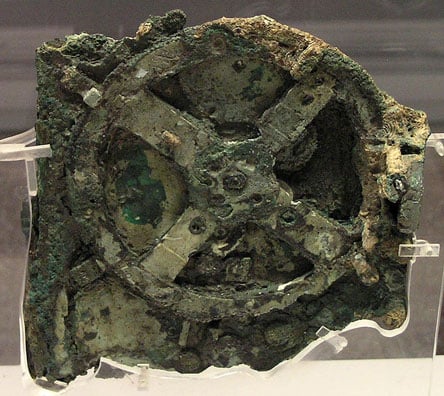 A fragment of Antikythera mechanism

Antikythera Mechanism: How Did It Work?

The Antikythera mechanism is a hand-powered analog computer used to predict the positions of astronomical bodies and eclipses. It also kept track of the four-year cycle of the ancient Olympic Games.

The device was inside a wooden case about 13 inches long. The device was recovered in 82 different fragments and many of them contained inscriptions and numbers. The bronze gears followed the movement of the sun, moon, and zodiac constellations. Scientists believe that the device may have tracked the position of the five classical planets known to the Greeks at that time. The Antikythera mechanism dates back to 87 BC. You can view the artifact at the National Archaeological Museum of Athens. They also have a replica so you can see how the machine may have worked in action.

The Antikythera mechanism was remarkable for the time. It was a machine designed to predict celestial phenomena according to sophisticated astronomical theories. It is the sole witness to a lost history of brilliant engineering, a conception of pure genius, one of the great wonders of the ancient world.