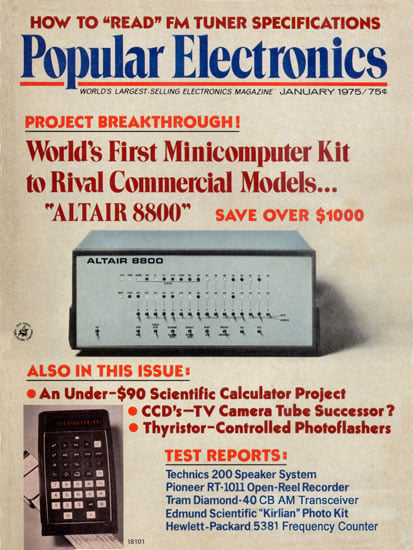 January 1975 cover of the magazine Popular Electronics, featuring the Altair 8800

The History Of The MITS Altair 8800: What To Know

The two founders were fond of model rockets earlier in their careers and were even met with the publisher of the Model Rocketry magazine. Forrest Mims wrote an article for Model Rocketry about a tracking light used to track rockets launched during his time in the Vietnam War the same year he and Ed Roberts founded MITS, and eventually became a recurring contributor to the magazine.

It was then the two brought in fellow United States Air Force veterans Stan Cagle and Bob Zaller to begin developing and selling model rocket accessory kits, and made a press release in the Model Rocketry magazine to announce their company’s new beginning. The early days of the company saw the sales of accessories that could tell model rocket hobbyists surrounding temperature, roll rates, and other telemetric measurements about their rockets.

However, it did not take long for the company’s next big idea to come: the Opticom, which was a light emitting diode (LED) capable of transmitting audio through concentrated light waves. However it didn’t take long for many of the co-founders to want out of the company, so Ed Roberts bought the company entirely and began MITS’ next project.

In 1971, with financial backing from two more United States Air Force members, Ed Roberts released the MITS 816, a “build it yourself” four-function calculator kit. The kit did sell with the option to come assembled, though. The calculator kit did much better than the model rocket accessories, and the company was soon taking full page advertisements in publications such as Scientific American and Popular Electronics. Just a year later a newer, more capable calculator was being sold.

In 1974 MITS finally released the predecessor to the Altair 8800 computer kit. The system’s specs included a 1024 byte memory board. Right around the time of its release the BASIC (Beginner’s All-purpose Symbolic Instruction Code) programming language was announced, as well as the Intel CPU. Just a short while later in January of 1975 Popular Electronics debuted the MITS Altair 8800 as the “world’s first minicomputer kit to rival commercial models”.

This debut was noticed by the well known founder of Microsoft, Bill Gates, who actually contacted Ed Roberts with a proposal to create a BASIC interpreter for the MITS Altair 8800. Bill Gate would go on to work for the company part-time after leaving Harvard, but ultimately left to start Microsoft.

There was little competition to the microcomputer for several months after its initial release, and the first major competitor was only releasing computer bus parts compatible with the MITS Altair 8800, but not an entire minicomputer. It wasn’t until October of 1975 a company called IMS Associates began releasing the IMSAI 8080 kit, though MITS responded with an improved kit of their own in the Summer of 1976. In 1977 MITS was acquired by Pertec Computer Corporation. 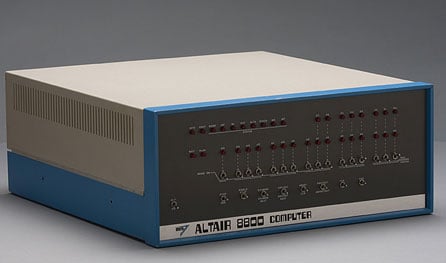 The MITS Altair 8800 was a relatively customizable piece of equipment. Users needed to purchase a few components just to make it run, and there were additional accessories available. The computer itself ran anywhere from $439 to $621 depending on whether it was assembled, there were additional memory boards available for purchase, and interface boards.

There were also audio cassette boards and additional accessories made for the Altair 8800, as well as other accessories made by various companies. The main “standard” two versions in the MITS Altair 8800 microcomputer kit are the 4K BASIC and 8K BASIC packages, which shipped with either on or two 4096-word memory boards.

The MITS Altair 8800 is a microcomputer kit developed by a handful of United States Air Force veterans to generate more interest in computers among hobbyists.

What was the processor for the MITS Altair 8800?

Who marketed the MITS Altair 8800?

The MITS Altair 8800 was marketed in several scientific and hobby magazines such as Scientific American and Popular Electronics.

The MITS Altair 8800 was a microcomputer meant to allow hobbyists an affordable way to continue to tinker with computers since they were a growing hobby and piece of equipment at the time.

Was the Altair 8800 successful?

The Altair 8800 microcomputer was so successful that MITS could not keep up with delivery demands, which resulted in accessories being developed and sold by competitors.

What problem did the Altair 8800 solve?

The Altair 8800 was an affordable, customizable way for hobbyists to get more experience with microcomputers. This was difficult prior to the 8800’s release since most computers were either too expensive, vendor specific, or both.