You are here: Home / The History of Leonardo Torres’s chess-machine 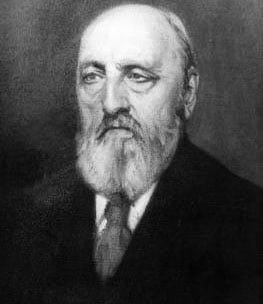 The famous Spanish inventor Leonardo Torres y Quevedo was mentioned several times in this site, mainly regarding his automatic calculating machines. However, this time we will pay attention to his chess-playing automata. 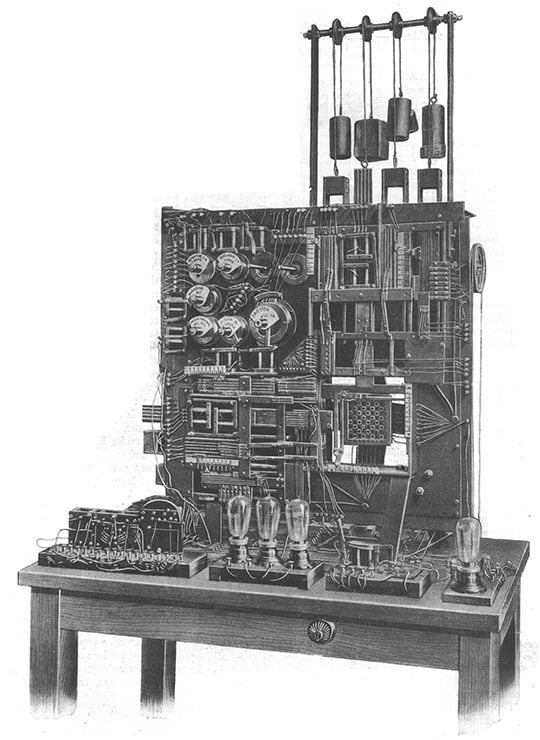 Leonardo Torres was not the first man, who dreamed to create a chess-playing machine. Several attempts were made for such machine before, but all of them were based on fraudulent concept. The fraudulent chess-playing machine of Baron Wolfgang von Kempelen, called The Turk, presented in 1769, had a remarkable success record in its travels around the world, but actually has a cabinet of 4x2x3 feet, which hid a small person, who mechanically controlled the hand movements of the turban wearing mannequin. Later chess automatons were The Ajeeb ( from 1868) of Charles A. Hopper and The Mephisto (1878) of Charles Gumpel, both based on the same fraudulent concept as The Turk 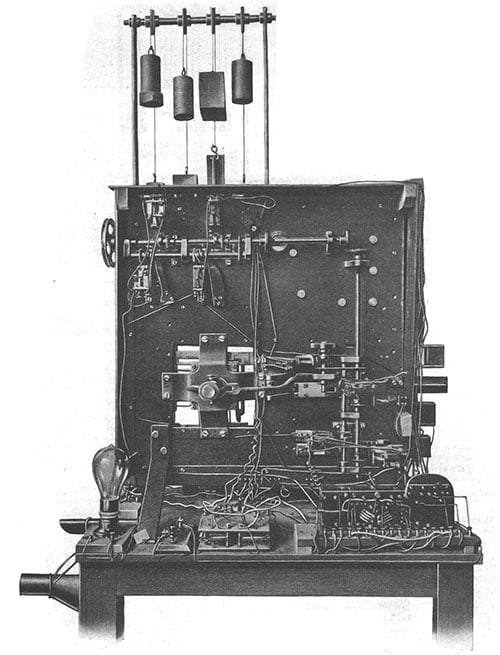 The first chess-automaton of Torres (back view)

By the beginning of 1910 Torres commenced his work to made a chess-playing automaton, to prove his theory that machines could do many things popularly classed as thought. The machine, dubbed El Ajedrecista (Spanish for Chess-player), was designed for the end game of King and Rook against King. This chess player was fully automatic, using electromagnets under the board, thus using electrical sensing of the pieces on the board and what was in effect a mechanical arm to move its own pieces.

The machine (see the upper images for front and back view, and the lower photo of the machine) could, in a totally unassisted and automated fashion, deliver mate with King and Rook against King. This was possible regardless of the initial position of the pieces on the board. For the sake of simplicity, the algorithm used to calculate the positions didn’t always deliver mate in the minimum amount of moves possible, but it did mate the opponent flawlessly every time. 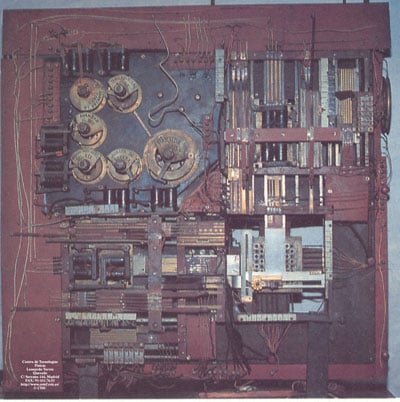 The first chess-automaton of Torres

El Ajedrecista made its public debut during the Paris World Fair of 1914, creating great excitement at the time. The machine was widely mentioned in the Scientific American magazine article of 6 November, 1915, as “Torres and His Remarkable Automatic Devices”.

In an interview given to a Spanish journalist Torres described briefly his machine as follows:
It is an apparatus, that plays chess with the king and the rook as if it were a person, knowing with absolute precision all moves that occur and always matting its opponent. Besides this, it warns its opponent, in a courteous manner, af any mistakes (i.e. illegal moves) made by his opponent by means of a light, and after its opponent has made 3 mistakes, it ceases playing, considering that its opponent is no match for it… This apparatus has no practical purpose, but it supports the basis of my thesis: that it is always possible to create an automaton the actions of which always depend on certain conditions and which obey certain rules that can be programmed when the automaton is being produced. Evidently these rules will be such as to be self-sufficient to determine the performance of the automaton without any uncertainty and at any given moment. 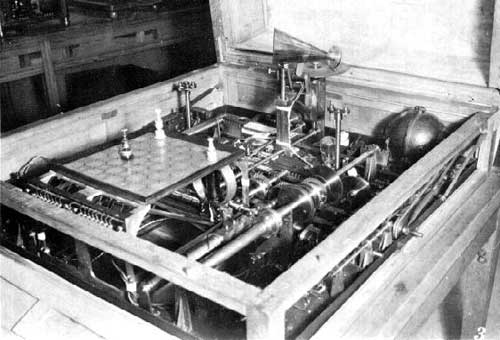 The second chess-automaton of Torres

In 1920 Torres and his son Gonzalo created and demonstrated a second chess automaton, which is similar to the first, but used magnets underneath the board, not a mechanical arm, to move the pieces. Like a number of his other inventions, both machines are still in working order and can be found in the Torres Quevedo Museum of the Technical University of Madrid. When in Madrid, chess enthusiasts should see these unique inventions for themselves. 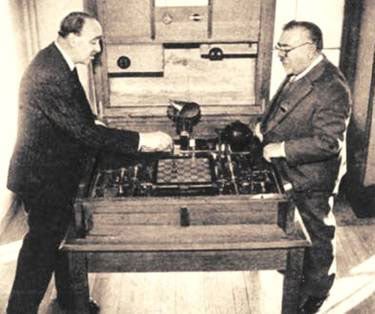 Gonzalo Torres demonstrates the chess-automaton to Norbert Wiener in 1951

A description of the machine was created by Professor Aranguren, from the Complutense University of Madrid:
Roughly speaking, the movement of white pieces depends on the movement of the black king. Each of the 64 squares of the chess board (8 rows x 8 columns) are formed by three metallic pieces separated each other by an insulating material; the central piece is circular and is connected to the positive terminal whereas the side pieces are triangular and are respectively connected to two conductors, one horizontal and one vertical.
The black king has a silver mesh-base that connects the central piece of the square to the triangular ones, thus closing two electrical circuits that move two respective sliding bars, one horizontal and one vertical, until they reach two positions that determine the black king position on the chess board. Similarly, positions of the white king and rook are defined by four sliding bars, two for each of the pieces. When the black king moves into a position, the corresponding sliding bars move and close, by means of suitable contacts, the electrical circuits which act in turn on the white pieces making them move according to the game strategy. The white pieces have a steel ball in their base and are driven by electromagnets, which are placed under the table and suitably activated for each black king position.
When a check situation occurs, a phonographic disc pronounces the sentence “check to the king”. When checkmate occurs, the disc pronounces the corresponding sentence and a warning light indicating mate is turned on. In these cases, an electromagnet removes the tension from the board, thus ending the game. The automaton won. Although the chess automaton function was limited to particular chess end-games, Torres Quevedo proved that further advances in computer technology were possible at a time when the information about “artificial intelligence” was very limited. At the time of this invention Torres Quevedo was President of the Academy of Sciences of Madrid, Spain.

Another explanation and a drawing of El Ajedrecista can be found in the article Les automates: Le jouer d’´checks automatique de M. Torres y Quevedo by Henri Vigneron from 1914:

If the opponent plays an illegal move, a light comes on and the robot refuses to make a move. Once three such illegal moves have been made, the robot ceases to play altogether. If, on the contrary, the robot will carry out one of six operations, depending upon the position of the (just moved) black king. In order to archive this, Mr Torres use two zones on the chessboard: the one on the left consisting of the a-, b-, c-files, and the corresponding one on the right consisting of the h-, g-, and f-files. We then have six operations as shown in the figure: 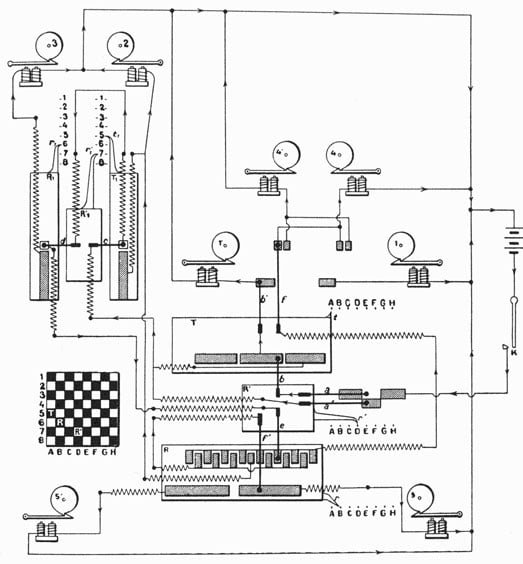 A principle assembly of El Ajedrecista

Both versions of Torres’ chess automaton are still working and are on display at the Colegio de Ingenieros de Caminos, Canales y Puertos in Madrid.

The Macintosh, or Mac, is a series of several lines of personal computers, manufactured by Apple Inc. The first Macintosh was introduced on January 24, 1984, by Steve Jobs (see the lower photo) and it was the first commercially successful personal … END_OF_DOCUMENT_TOKEN_TO_BE_REPLACED