The PlayStation 2 (PS2) was originally released in the US, Europe, and Australia in late 2000. Although it was released over twenty years ago, the PS2 still ranks as one of the most successful gaming consoles in the industry. The PS2 was revolutionary not just in terms of hardware, but also due to its formidable catalog of games. Many of these titles were in the action genre, which is characterized by physical challenges to test hand-eye coordination and reaction time. The player typically navigates an avatar through each level of the game, collecting items, battling enemies, and avoiding obstacles to reach a final boss at the end. The action genre is quite versatile, however, often taking on characteristics from sub-genres such as fighting, first- and third-person shooters, and platforms. The following seven games are my top picks for the best PlayStation 2 action games of all time.

Grand Theft Auto: San Andreas (Rockstar Games, 2004) is consistently ranked as one of the best PlayStation 2 action games. This open-world game revolves around the fictional state of San Andreas and its three cities, Los Santos, San Fierro, and Las Venturas. The story follows Carl “CJ” Johnson as he rejoins the Grove Cities Families in gang wars, risky heists, and high-speed police chases. Upon its release, GTA: San Andreas was the largest and most sophisticated of any open-world game. In addition to the huge 3D landscape, San Andreas also introduced role-playing and survival elements. CJ’s abilities were adjusted depending on exercise or diet and pedestrians were more reactive to players’ choices. Although the entire Grand Theft Auto series is generally well-regarded, GTA: San Andreas is seen as one of the definitive highlights of gameplay on the PS2. 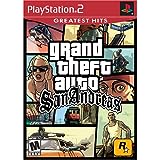 Shadow of the Colossus

Shadow of the Colossus (SCE Japan Studio, 2005) is another PS2 favorite with a huge open world for players to explore. The game is considered a work of art by many for its beautifully designed and intricately detailed environments. The story focuses on a young man who brought a girl to a faraway shrine in the hope of bringing her back to life. The mysterious presence in the temple indicates the only way to save her is to kill the sixteen colossal beasts that roam the surrounding lands. Defeating a Colossus requires skill in action-oriented gameplay, as well as the ability to solve puzzles. Shadow of the Colossus is considered one of the most important PS2 games in terms of artistic expression, and the battles with the colossi are frequently cited as some of the most exciting action sequences in gaming. 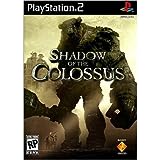 Devil May Cry 3: Dante’s Awakening (Capcom, 2005) remains one of the most influential action games due to its challenging gameplay, engaging cut scenes, exceptional soundtrack, and engrossing storyline. Set as a prequel to the original Devil May Cry, Dante’s Awakening highlights the twisted relationship between demon brothers Dante and Vergil. While the gameplay still revolves around killing demons, completing tasks, and solving puzzles, the customization options allow players to choose one of Dante’s four combat styles. This style-based combat engine emphasizes combos and provides better control of weapons to produce superior fighting sequences. The combat mechanics were seen as a vast improvement to the usual hack-and-slash of the era, earning Devil May Cry 3 a spot on our list of best PlayStation 2 action games of all time.

Resident Evil 4 (Capcom, 2005), was a departure for the series. Developers abandoned the previous horror movie features for a more realistic storyline. In Resident Evil 4, players take on the role of Leon Kennedy, a police officer who must rescue the president’s daughter from a mysterious cult. The more action-oriented gameplay did not lack frightening moments, such as villagers infected by mind-controlling parasites and a chainsaw-wielding maniac. The game has been praised for its character design, dynamic camera angles, resource management elements, and noteworthy voice acting. Critics have also noted the game’s superior pacing, mood, and setting. Additionally, Resident Evil 4 popularized the over-the-shoulder view that influenced future survival horror and third-person games. With all of these accolades, it is no wonder Resident Evil 4 is one of the best third-person shooters of all time.

There are few action games in the same league as God of War II (Sony, 2007). God of War II has received nearly universal acclaim for its immersive storyline, technical graphics, and refined improvements to the already excellent mechanics of the original game. The story follows the protagonist, Kratos, who has become the God of War after defeating Ares. After Kratos is betrayed by Zeus, he joins forces with the Titans to exact revenge on the Gods. God of War II features combo-style combat, but enhanced quick-time events allow the player to use magical attacks and power-enhancing abilities by completing specific controller actions. The game also includes improved puzzles and platforming elements that honed the gameplay experience in this sequel. God of War II continues to be praised for its polished design and outstanding visuals, leaving no question that it is one of the best PlayStation 2 action games ever made.

Metal Gear Solid 3: Snake Eater (Konami, 2004) is one of the most unique installments of the influential Metal Gear Solid series. The game takes the player back in time to the 1960s and the exploits of Naked Snake, who was cloned to create future protagonists. The plot focuses on Snake as he hunts his former mentor, known as The Boss, who has defected to the Soviet Union. The series is known for its complex narrative, but Metal Gear Solid 3 features one of the most meaningful twists in the entire storyline. The Metal Gear Solid series practically invented the stealth-action hybrid, but this installment sees added improvements to the formula and enhancements to the action sequences. Although the game retains some of the unconventional elements of the previous titles, some of the outright bizarre aspects are missing, making it a more realistic entry in this consistently high-caliber series. 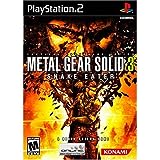 The Kingdom Hearts series is one of the most successful crossovers in gaming history. This Final Fantasy and Disney mash-up cleverly utilizes characters and plot devices from both franchises. Kingdom Hearts II (Square Enix, 2006) is arguably the best in the series. Players accompany Sora, Donald, and Goofy on their continuing quest to find Sora’s missing friends while battling the shadowy Organization XIII. More advanced battle mechanics allow for new combos and cooperative attacks with other characters. A wider range of commands permits Sora to shift into new forms that change his skills and abilities.

An updated camera system put players right in the middle of the action, addressing the issue with a perspective that plagued combat sequences in Kingdom Hearts. Additional worlds inspired by Beauty and the Beast and The Lion King also provide an expanding universe for players to explore. Developers took everything that made the first game great and made it better, which is why Kingdom Hearts II is ranked as one of the best PlayStation 2 action games ever produced.

It seems a bit unfair to list these great games for a console that was officially discontinued in 2013. Luckily, all of these games can be played on next-gen consoles. Grand Theft Auto: The Trilogy – The Definitive Edition includes a remastered Grand Theft Auto: San Andreas that can be played on PS5, PS4, Xbox X/S, Nintendo Switch, and PC. Shadow of the Colossus was remade for PS4. Devil May Cry 3 was re-released in HD for PS3, Xbox 360, PS4, Xbox One, and PC. It was also remastered for Nintendo Switch.

Although Resident Evil 4 was previously re-released on PS4 and Xbox One, a long-awaited remaster will release in March of 2023 for PS5, Xbox Series X/S, PS4, and PC via Steam. God of War II was remastered for PS3, but it can also be played on next-gen consoles with a PlayStation Now subscription. Metal Gear Solid 3 is rumored to be getting a remake for new consoles, but the HD re-release can be played on PS3, Xbox, or on PS4/5 through PlayStation Now. Last but not least, Kingdom Hearts II was remastered as part of the Kingdom Hearts HD 2.5 Remix for PS3, PS4, Xbox One, Nintendo Switch, and PC.

These are my top picks for the best PlayStation 2 action games of all time. With such an extensive array of popular titles to choose from, it was difficult to narrow it down. While there are certainly other games that were contenders, the titles in my list were not only successful upon their release, but they have also stood the test of time. The PS2 was instrumental in the development of these franchises, and all of them are still going strong in 2022. Check out a few of these games for yourself to discover why these titles are considered classics of the action genre.

Can you play PS2 games on next-gen consoles?

Yes. Many PS2 games were remade or remastered for later consoles. Some PS2 games can be also played on next-gen consoles via a PlayStation Now subscription.

Which PS2 action game is the best?

A number of lists suggest Grand Theft Auto: San Andreas is the best PS2 game. Ultimately, it is a matter of personal choice.

What is an action game?

An action game is characterized by physical challenges that require good hand-eye coordination and quick reflexes.

What types of games are considered action games?

Some examples of different types of action games include platforms, fighting, shooters, survival, stealth, and rhythm.

What are some qualities that make a great PS2 action game?

Some of the qualities that make a great PS2 action game include challenging but rewarding gameplay, replayability, an engaging story, an open-world concept, high quality graphics, and a good soundtrack.

Trina is a freelance writer and content creator in Nashville, TN. As a former instructional designer, she is knowledgeable about eLearning, authoring tools, educational technology, and learning management systems. She is fascinated by space, science fiction, video games, gamification, personal tech, digital audio, and music production. When she is not writing, she can be found watching movies, playing video games, or going to concerts with her family. She is known far and wide as a cat fancier, an avid reader, a Star Wars enthusiast, and a death metal aficionado.