First-person shooters have been around since the 90s but didn’t really shine on consoles until the newer systems came along with more power. The GameCube is a good example of that, and the best GameCube first-person shooters still hold up well today. While the platform wasn’t known for a wealth of FPS titles, we’ve rounded up six of the top shooters gamers can still enjoy in 2022.

5 Fun Facts about the Nintendo GameCube

The “shooter” genre has been popular since gamers began zapping ducks with on the NES. The styles have varied over the years, but the principle of these games remains the same – shoot anything that moves. The first-person viewpoint pulls you into the action, and if you owned a GameCube, there were around a dozen titles to choose from.

Compared to other consoles of the day like the PlayStation 2, the overall selection of shooters on Nintendo’s system is light. Some of the bigger names in the genre made an appearance, however, along with unique titles like XIII, Jude Dredd vs. Death, and Turok Evolution. While you won’t find those games on our list of the best GameCube first-person shooters, the titles below are widely regarded as the best at that time.

You can find first-person shooters on any console including the GameCube, but you can’t find some Nintendo games on other platforms. Metroid is an example of that, and Metroid Prime is a hybrid shooter widely regarded as of the best video games of all time regardless of the platform.

Is it a shooter or an action-adventure game in first-person? That was the question millions of gamers pondered in 2002 as Metroid Prime is the first 3D game in the franchise. It’s also the first game to put Samus into a first-person perspective, complete with a heads-up display. You can use X-ray vision and the scanner thanks to the helmet, and your view changes with each visor.

The helmet view is part of the charm of Metroid Prime, just like the Morph Ball which switches to a third-person view when in use. The gameplay in Metroid Prime pushed gamers to the limit, but the storyline was top-notch as well. It picks up after the first two games and is followed by Metroid Prime 2: Echoes, another highly-rated GameCube title.

With a 9.8 from IGN and high scores from other leading publications, it’s hard to argue how popular Metroid Prime was when the game launched. It’s just as good today, however, and one of the best GameCube first-person shooters, even if Nintendo initially billed it as a first-person adventure game instead. 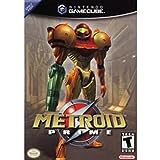 TimeSplitters 2 is the sequel to the original TimeSplitters, a highly-rated game for the PlayStation 2. The new game takes place in the future where you’ll play as Space Marines, who travel back in time to find Time Crystals lost across the ages. Each setting brings different elements into play, and there are a variety of skills and abilities.

You can take on Story Mode alone or with a friend via co-op. There’s also an Arcade and Challenge Mode which is where you’ll gain medals to unlock characters and cheats. Want to shoot paintballs like in GoldenEye? That’s an option, and you can set up a DeathMatch or play BagTag with up to four players through the game’s multiplayer features.

MapMaper is still a blast and allows gamers to create their own levels. We’re also a big fan of the mini-games you can play through the Temporal Uplink and fun weapons like the Monkey Gun. Story mode is split into 10 levels, but the possibilities are endless for this first-person shooter once you factor in cheats, unlocks, and the additional modes.

TimeSplitters 2 was a hit when it launched in 2002 and is still considered once one of the best GameCube first-person shooter games for the system. It’s also fairly affordable and easy to find compared to other vintage cartridges on the console like Conker’s Bad Fur Day or Goeman’s Great Adventure. 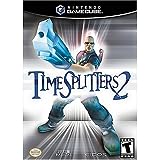 FPS games fall into many subcategories, but some take a traditional approach with both gameplay and the setting. Medal of Honor Frontline is a prime example of that, and one of the best titles for the GameCube when you’re in need of a realistic WW2 shooter.

Medal of Honor Frontline is the fourth game in the series and the first to make its way to the GameCube. When it arrived in 2002, gamers were able to jump into the boots of Jimmy Patterson again and storm the beach on D-Day. Things don’t slow from there as you battle the Wehrmacht through action-packed levels using authentic weaponry.

There are more than a dozen levels in Frontline along with eight multiplayer maps like Port Authority and Rubble Town. The soundtrack is fantastic, and if you’re a fan of weapons, you will not be disappointed by the arsenal in the game. There are pistols, submachine guns, and bazookas along with a variety of grenades.

From stealth missions to U-boat raids, Medal of Honor Frontline has something for everyone. You’ll need a lot of medkits if you want to make it through unscathed, and the gameplay will feel just as frantic today as it did in 2002.

Whenever there’s a “best” shooters list for classic consoles of the 90s and 2000s, you’ll always see an entry for Medal of Honor and Call of Duty. While the original COD never arrived on the GameCube, Call of Duty Finest Hour was the first entry from the franchise on the system in 2004.

Finest Hour is based on the original Call of Duty, so gamers will be familiar with the setting and gameplay. In this game, you’ll fight across several fronts as different characters in the American, British, and Soviet campaigns. The game features dozens of characters and locations spread across 19 levels with the North African campaign being the shortest.

Unfortunately, gamers were not able to enjoy traditional multiplayer on the GameCube compared to the PS2 and Xbox ports. Split-screen local was a blast and still is, especially if you appreciate intense action on several continents. It’s one of the best GameCube first-person shooters for gamers who dig historical battles, and another classic game that’s easy to acquire thanks to its popularity.

Call of Duty: Finest Hour was well-received on the GameCube and other consoles upon release, even if a few areas felt a little unpolished at the time. When you complete Call of Duty 2 you can continue the adventure on your GameCube through Big Red One, a side story based on COD 2.

First-person shooters have always had a home with gamers who like realistic action and locations they can recognize. Red Faction II takes a different approach as the game is set in 2080 in a time of super soldiers and nanotechnology.

Red Faction II takes place five years after the original game, and you play as Alias, a demo expert in the rebellion. The game action kicks off early in Red Faction II, and while the single-player campaign, isn’t the longest, it’s packed full of action. The boss battles sent plenty of gamers into fits of rage, especially an enhanced version of a particular villain.

As for the gameplay, there are 11 missions in the campaign and local multiplayer. In couch mode, you can battle against your friends in traditional modes like Deathmatch and Arena. There are some interesting additions as well with Bagman and Regime. Bot creation is top-tier with full stats including upgrades as they level up through gameplay.

Red Faction II is a game that’s easy to get into and hard to put down once you get the hang of things. The ability to dual-wield should not be underestimated, and the world Volition and Cranky Pants created has plenty of depth thanks to destructible environments where an errant bullet can impact a building or a civilian. If you love action, it’s definitely one of the best GameCube first-person shooters.

Star Wars games have been a mainstay on consoles since The Empire Strikes back launched on the Atari 2600 in 1982. You can find plenty of Star Wars video games on Nintendo consoles, including Star Wars Jedi Knight II: Jedi Outcast.

Unlike other titles on our best GameCube first-person shooters list, Jedi Knight uses the first and third-person perspectives. There is no shortage of ranged weapons you can fire, but lightsaber combat in first-person takes things to the next level as you can see in the video below.

There are also Force powers you can use on enemies through more than 20 single-player levels. The story is just as solid as you would expect, and while you play as Kyle Katarn, you’ll encounter plenty of familiar faces along the way. The gameplay isn’t quite as smooth on the GameCube as it was on the Xbox, but it’s still one of the best “shooters” on the console.

Star Wars Jedi Knight II: Jedi Outcast is a must-play game for any Star Wars fan that owns a GameCube. Even with outdated graphics, the gameplay is still rock solid and you can lose yourself for hours in the campaign. If you want to try out this classic with a more unique control scheme, consider Jedi Outcast for the Nintendo Switch.

What was the bestselling GameCube game?

Super Smash Bros. Melee which sold more than 7 million copies, but Mario Kart Double Dash was not far behind.

Where can you buy GameCube games?

Amazon and eBay are two of the best places to purchase used GameCube games online.

Was the GameCube more powerful than the PlayStation 2?

Yes, the GameCube had a faster GPU than the PS2 and there was often a noticeable difference in the graphics on the same game between systems.

What’s the most expensive GameCube game?

Gotcha Force, Fire Emblem Path of Radiance, and Go Go Hypergrind are among the most expensive titles for the GameCube used or new.

When was the GameCube discontinued?

It was discontinued in 2009 in North America and a few years earlier in Japan.

Was the GameCube a failure for Nintendo?

From a sales standpoint, yes as the PlayStation 2 sold more than five times the systems although Xbox only beat the GameCube by a few million sales. Nintendo made a profit but lost market share.