Gamers that enjoy a challenge don’t have to look hard to find a difficult game, but some genres are built around that concept like survival games. The best Xbox survival games come in many forms, and there are a few exclusives that didn’t make it to PlayStation and Nintendo consoles.

You can find a survival game for any generation of the Xbox, but we focused on the top options across the history of the console.

Survival Games on the Xbox

Gamers have enjoyed survival games on the PC since The Oregon Trail for the Apple IIe, but there hasn’t been a wealth of titles on consoles. That’s especially true on the Xbox, where we found less than a dozen games that qualify for this genre.

Minecraft is a game many consider to be one of the first survival games on the Xbox, but it’s not something we included on our list. It’s more of a sandbox game when compared to titles like Day-Z, How to Survive, or even Don’t Starve. Many survival games are also available on multiple systems, so you can play games like Conan Exiles on the PC, Xbox, or PlayStation 4.

We have no doubt the selection of games will grow with the new Xbox Series X/S. You can expect Valheim to make the list in a few years, but for now, here are the best Xbox Survival games so far.

The 6 Best Xbox Survival Games of All Time

Obsidian has released some fantastic games over the years like Neverwinter Nights 2 and Fallout: New Vegas. You can add another one to that list with Grounded, the surprise hit of 2022 that’s kept fans of the survival genre glued to their screens for days on end.

Grounded is a classic survival game. You’ll have to eat to keep from starving and drink water while avoiding hazards in your environment. In this case, the environment is a backyard, and your enemies are spiders, soldier ants, and mites among other creepy crawlies. While that may not sound challenging, it is when you’ve been shrunken to the size of an ant.

Base building, scavenging, and combat are all essential elements in Grounded, and the action can get intense when night rolls around. There are three difficulty levels in the game along with sandbox and custom modes. While the game is fun solo, Grounded is even better when you bring a friend along for the ride.

Whether you’re in search of precious dewdrops or simply trying to make your way to the next area, the danger is everywhere in Grounded. Don’t let the game’s graphics and the backdrop fool you either. The game can be brutal, and it will whittle your free time down to nothing. There’s no physical version at this time, but you can pick up Grounded through a digital download. 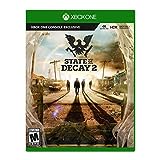 Zombies have always been a popular subject in survival games, so it’s no surprise to find a title from that genre on our list. Our favorite zombie survival game on the Xbox is State of Decay 2, a sequel to the original smash hit.

State of Decay 2 is a third-person survival game set in an apocalyptic wasteland. You’ll band together with other survivors to set up a base, which requires a considerable amount of scavenging. There’s a lot of interaction with NPCs between trading and quests, and recruitment is a large part of the game. Not every survivor will be a welcome addition to your party, so you’ll have to take their traits into account along with their attitude.

Things that happen in State of Decay 2 can have an impact on your group. Missions can go wrong and party members can die, whether it’s by a group of zombies or a Juggernaut. The single-player mode will keep you busy for ages as the world is full of possibilities. Co-op is also outstanding when you have a good group of 2-3 players.

If you like zombies and love survival games, State of Decay 2 should be at the top of your list. There is a lot of depth between the original game and DLC, and it’s a cross-play title with Windows 10.

You can find State of Decay 2 in a variety of editions or pick up the original here if you want to start the adventure at the beginning.

Conan Exiles is an often overlooked game on consoles, but one of the best survival simulators for fans of open-world games. It’s set in the Hyborian Age, and while you can’t play as Conan, the setting would make him proud.

The world of the Exiled Lands is brutal. Each biome presents its own challenges from the Frozen North to the Ashlands, and the game is absolutely massive. How you play the game is up to you, as you can follow the storyline or set up camp anywhere you’d like. Want to play as a nomad? That’s an option, but so is setting up a large city complete with worshipers.

Crafting in Conan Exiles is easy for beginners to get the hang of, but seasoned pros should be pleased with the transition to the Xbox. There’s a lot of depth between crafting, equipment, and some interesting options in the character creator – even if they were censored by the ESRB. The enemies are just as varied as the animals in the game, which you can capture just like various NPCs.

Conan Exiles has been around since 2018 on the Xbox One and was popular on Steam before that. While the Xbox One version is solid, the Conan Exiles Enhanced is the best way to play the game on a console if you own the Xbox One X. The newer version allows you to play in 4K, but the game is available in physical format and through Game Pass as well.

Play it for yourself on Amazon here.

Survival horror games have been a staple on consoles for decades, but you’ll find more of those on the PlayStation than you will with the Xbox family. One exception is Darkwood, a highly-rated survival game from Acid Wizard Studios.

Darkwood is a game with a storyline, so we aren’t going to get into spoiler territory. It’s a treat for horror fans, however. The story takes place across multiple chapters in the late 80s and changes based on the decisions you make in the game. How you interact with NPCs will affect the ending and new elements unlock as you progress through the game.

As for the gameplay, we split a lot of time between crafting and combat. Both are easier during the daytime, as you’re put into defensive mode when nightfall comes around. You’ll be rewarded every time you make it through the night. That may not be very often on higher difficulty levels, and there’s also permadeath if you truly want a challenge.

While Darkwood is a borderline “survival” game by some standards, we feel it fits right in thanks to the crafting system, trading, and skill trees. Having to defend your base is a nice touch, and it’s not a jump-scare type of game, but a solid horror title from top to bottom. There are some very rare physical copies of Darkwood for the Switch and PS4, but Xbox users will need to rely on a digital download.

Survival horror games have always been a nice change of pace in the genre, and provide something different for those who don’t like to build or defend bases. One of the spookiest games of this nature on the Xbox is Outlast 2, a game that gave plenty of players nightmares.

Unsettling is the word that best describes Outlast 2. From the eerie soundtrack to the storyline, it’s the type of game that will keep you on the edge of your seat. The immersive atmosphere sucks you into the world, which takes place in the deserts of Arizona. While that may not sound as creepy as the mental hospital setting in the first game, nothing could be further from the truth.

Outlast 2 is a game about survival and exploration. You will have to scavenge for some supplies, but it’s a game where the story and setting is the star of the show. That’s due in part to J.T. Petty, a horror director who wrote the script for this game and the original. There is plenty of jump scares throughout the game, but not very many batteries.

If you are easily frightened, Outlast 2 may not be the best game for you as it will make you jump and does stick with you long after your monitor goes dark. Just remember to keep your camcorder charged and keep an eye on your stamina as you run, hide, and creep through the game.

While Outlast 2 is our favorite, you can pick up Outlast Trinity and enjoy the series from start to finish.

See if you can survive by picking up the game on Amazon here.

Rust is one of the older games on our list as it’s been around since 2013 when it was in early access. PC gamers have been enjoying some form of the game since that time, and Xbox owners were able to join the madness in 2021.

Lots of survival games let you kill other players and take their loot. Rust takes things a step further. It’s a hybrid first-person action survival game as you can build bases, craft, and scavenge. Hunger and thirst are constant concerns, although your biggest threat comes from other players in this online multiplayer survival game.

Players can take you down quickly from near or far in a variety of ways in the wild world of Rust. They can also restrain you just for kicks if you surrender instead of fight. While you can try to take the game on alone, Rust is best enjoyed with friends or a clan. It’s certainly not a single-player game unless you like to die often.

Rust would be #1 on our list of the best Xbox survival games of all time if it weren’t for the lack of polish and controls. It feels unfinished at times, which shouldn’t be a surprise considering it’s based on Day Z. The sandbox game provides endless entertainment, however, and is the most hardcore survival game to ever hit Xbox consoles.

Check it out for yourself on Amazon here.

What was the first survival game on Xbox consoles?

I Am Alive and How to Survive were among the first survival games to arrive on the Xbox platform.

Are there any survival games for the Xbox Series X?

Grounded and Conan Exiles Enhanced are the two best-looking survival games for the Xbox Series X, although some older titles are also compatible.

Is Subnautica a survival game?

Subnautica contains survival elements but is regarded as an open-world action-adventure game by most similar to Minecraft.

Can you play Raft on any consoles?

Raft is only available on computers at this time due to hardware limitations with consoles.

Why aren’t there many survival games on Xbox consoles?

The survival genre is more popular with PC gamers and the control scheme can be challenging on some gamepads.