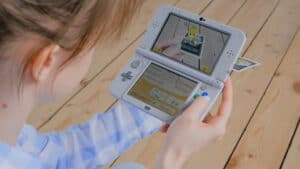 The 7 Absolute Best Nintendo 3DS RPGs of All Time

The Nintendo 3DS is part of the eighth generation of video game consoles, and Nintendo’s successor to the Nintendo DS. Being released 7 years later in 2011, the key difference between the two consoles is the inclusion of stereoscopic 3D effects with the 3DS; this offers a 3D experience to players without the use of […]

The 7 Absolute Best Fighting Games for the Nintendo 3DS

Continuing the legacy of Nintendo’s handheld gaming lineup is no easy task, especially when any hardware has to follow the wildly popular Nintendo DS. Nintendo’s 3DS portable gaming console was the company’s eighth-generation gaming console competing against Sony’s PlayStation Vita. Differentiating itself from the competition and the gaming market at large, the 3DS offered a […]

The 7 Absolute Best Nintendo 3DS Survival Games of All Time

Most people fondly look back at the Nintendo 3DS for its great platformers. The number of 3DS survival games is limited, but there were some notable titles that you should definitely give a try. Besides the traditional survival/horror games like Resident Evil, it also had some indie titles that were only available on the eShop. […]

Announced in March 2010 and released in North America one year later on March 27, 2011, the Nintendo 3DS was the company’s latest offering in the handheld gaming market. The successor to the Nintendo DS, the 3DS was part of the eighth generation of gaming. Along with more power to run a newer set of […]