Emery Manville Hamilton (see the biography of Emery Hamilton) was an impressive engineer and inventor from New York, with more than 20 patents in his name in various fields like the telegraph, typewriter, time recording device, etc. His first invention, an adding machine, he patented in July 1871 (US patent 117169) (see the lower patent drawing). The machine was announced in the section for more prominent patents of the August 1871 issue of the journal Scientific American (Volume 25, Number 06).

In the Scientific American Hamilton’s machine was announced as:

This is a combination of various devices whereby the operation of adding may be accomplished, the machine carrying and automatically registering the sum totals of the numbers set off upon it. We judge it will compare favorably with other competitors in the same field of Invention. 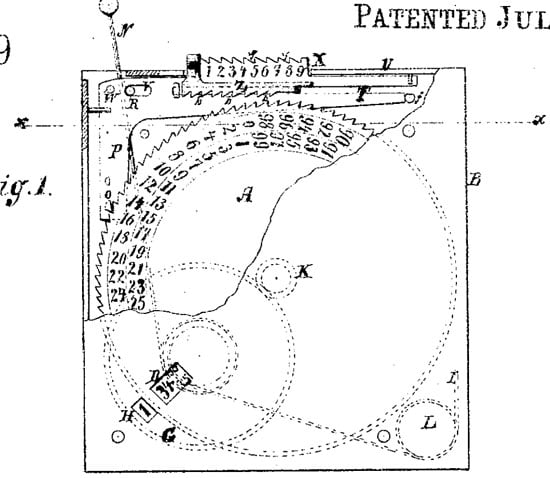 Hamilton’s adding machine consists of a large circular disk on a pivot in a rectangular case, having 100 notches and teeth in the periphery, which notches are correspondingly numbered on the margin of the upper side of the wheel. The operation is by means of a pencil, being placed in a notch, opposite the number on the projection of the bell crank, which is to be added to the number seen through the aperture, and the bell crank being pushed inward thereby so that the stud pin is disengaged with it. Thus, the disk will be free to be turned by a spring, and it will move the slide to the right until projection comes against the pencil resting in a notch, when it and the disk will be arrested and, as the movement of the disk at the part having the numbers on it is the same as that of the slide, being the sum of the two addends.

Mr. Hamilton was most famous for the typewriter that he invented, which he named the Hamilton Automatic. It was the smallest typewriter available at the time, being only nine by twelve inches and weighing twelve pounds. The Automatic was made out of brass, with three rows of keys and a nickel-plated space bar. This was the first typewriter invented with proportional spacing. It was not too expensive for its day and sold for 65 dollars in 1891 when other similar machines were selling for 100 dollars.

Mr. Hamilton also invented a perspective diagram sheet, a t-square, an adding machine, an electric telegraph transmitter, and a telegraphic receiver. His first patent was submitted when he was only 33 years old.