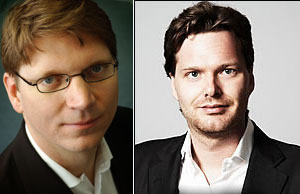 Skype is a extremely popular software application that allows users to make voice calls over the Internet, as well as instant messaging, file transfer and video conferencing.

Its development in 2002 was financed by the Skype Group, founded by Swedish entrepreneur Niklas Zennström and the Dane Janus Friis, who had already an experience in venture IT business, founding in 2001 Kazaa Media Desktop (once capitalized as "KaZaA", but now usually written "Kazaa")—the famous peer-to-peer file sharing application. Skype calls to other users of the program and, in some countries, to free-of-charge numbers, are free, while calls to other land lines and mobile phones can be made for a fee ($2.95/month gets you unlimited calls in the USA).

The name Skype came from one of the initial names for the project—SKY PEer-to-peer, which was then abbreviated to Skyper. It appeared however, that some of the domain names associated with Skyper were already taken. Dropping the final left the current title Skype, for which domain names were available.

The domain names Skype.com and Skype.net were registered in April 2003. In August 2003 was released the first public beta version of the program.

Skype is a real nightmare for phone companies, because it provides almost free phone services to each user with a Skype program and Internet connection. With popularizing of the wireless networks, the business of the pure phone service providers is going to decline. Moreover, Skype is now running not only on computers, but also on many models mobile phones and smartphones.

Skype uses a proprietary Internet telephony (VoIP) network, called the Skype protocol. The protocol has not been made publicly available by Skype and official applications using the protocol are closed-source. The main difference between Skype and standard VoIP clients is that Skype operates on a peer-to-peer model (originally based on the Kazaa software), rather than the more usual client-server model. The Skype user directory is entirely decentralized and distributed among the nodes of the network, i.e. users’ computers, thus allowing the network to scale very easily to large sizes without a complex centralized infrastructure costly to the Skype Group.

Skype uses a secure communication protocol, as encryption cannot be disabled, and is invisible to the user. Skype reportedly uses non-proprietary, widely trusted encryption techniques: RSA for key negotiation and the Advanced Encryption Standard to encrypt conversations. Skype provides an uncontrolled registration system for users with no proof of identity.

Now versions of Skype exist not only for Linux, Mac OS and Windows, but also for Maemo, iPhone OS, Android and even Sony’s PSP.

Skype was sold to eBay of San Jose, California, in September 2005, for approximately 2.5 billion USD. In May 2011 Microsoft purchased Skype from eBay for 8.5 billion USD. Furthermore, Microsoft discontinued two of its own products in favor of Skype: Windows Live Messenger and Lync.

The Macintosh, or Mac, is a series of several lines of personal computers, manufactured by Apple Inc. The first Macintosh was introduced on January 24, 1984, by Steve Jobs and it was the first commercially successful personal computer to feature two … END_OF_DOCUMENT_TOKEN_TO_BE_REPLACED