Are you the type of person that would wait until the newest generation of components comes out and then just buy the previous generation? Up until three years ago, that was the best budget-friendly option out there, but coming off the great GPU shortage and scalping era, that may no longer be the case. Prices are just now returning to fairly “normal,” and the used market that used to be fairly trustworthy has become a wasteland of abused mining cards and 10-year-old cards going for five times the price previously.

Don’t be too discouraged if you want to save money and buy a couple of generations behind the latest. The GTX 1080-Ti might still be a good purchase. Rumor tells it that the 1080-Ti can be coming back into production, so you might not have to buy a used GPU for much longer.  I remember the days when the GTX 1080-Ti was the god of NVIDIA GPUs, and you were quite the cool person to have one. So truly, what I am trying to answer with this comparison is the question. Is it worth the nostalgia of getting one of the greatest GPUs than it is getting the latest RTX 3070? 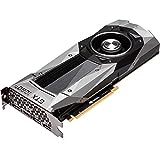 Keeping in mind that the GTX 1080-Ti is two generations behind the RTX 3070 tech-wise, we will dive into the performance results for gaming 3D rendering and a synthetic stress test through 3DMark. 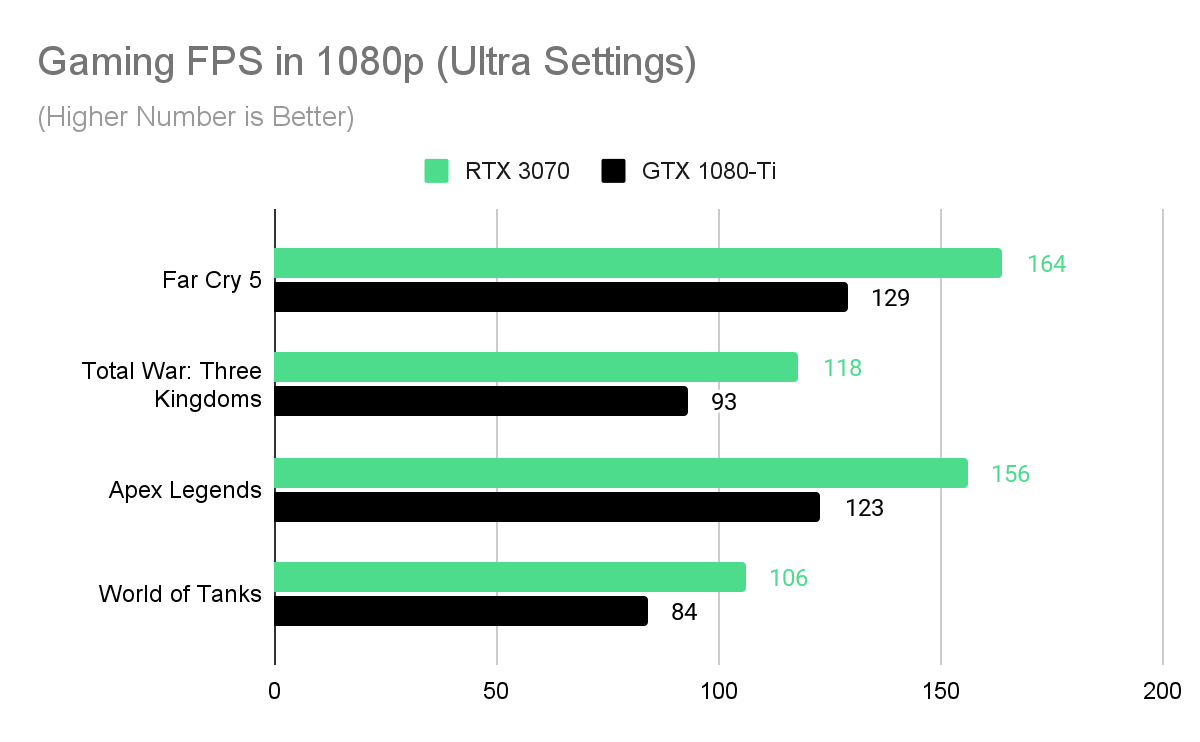 So, look at these results and remember that these cards have three years between them. Although the RTX 3070 beats the GTX 1080-Ti in all these games, they are all playable at ultra settings nonetheless. The thing to keep in mind is if you want to play games in 1440p or push into 4k, a GTX 1080-Ti is not going to be an option.

DLSS (Deep Learning Super Sampling), the four letters that have made Nvidia’s new GPUs an incredibly powerful choice for gaming, allows the GPU to boost the performance from 30 to 50% without losing image quality. The RTX 3070 has this feature, whereas the GTX 1080-Ti does not, making higher resolution gaming even better on the 3070.

The cards have both proven themselves worthy when it comes to gaming, but now we must look into creative programs. In this test, we will be looking at the score given to each card after rendering three scenes in Blender.

The RTX 3070 absolutely blows the GTX 1080-Ti out of the water here. This is primarily thanks to the newer architecture of the RTX 3070 and the higher base clock/turbo clock. After comparing these two for 3D rendering, the option is straightforward – You must go with the RTX 3070. You will have a better time rendering unless you want to save all your renders overnight and return to them a couple of days later.

In Adobe Creative Suite, the RTX architecture will be a better option than the older GTX models. If you want to buy a generation behind, I recommend looking at the RTX 2000 series cards instead of the GTX 1080-Ti.

The last performance test we will be taking a look at is 3DMark’s Timespy benchmark. This stress test shows how well a PC can handle itself under a hefty load. I am gathering these results from 3DMark’s leaderboard in PCs with only one card in the machine and not overclocked.

These last two performance results show how much of a jump there was between Nvidia’s GPUs in three years. That being said, the GTX 1080-Ti’s numbers are still quite impressive stacked against a modern-day GPU. Performance is everything, though. A massive thing to keep in mind is thermal capability and power.

One of the reasons you can be looking at a GTX 1080-Ti is to build a small form factor PC with still a very capable GPU that doesn’t output an outrageous amount of heat.

The ITX fans can fall in love with the GTX 1080-Ti. The founder’s edition is notoriously excellent in small form factors. Whereas the RTX 3070 can be pretty stifled and suffer from thermal throttling quickly, and sometimes depending on the model, they will not even fit in an ITX case.

Power, on the other hand, draws a reasonably similar amount on both of these cards. The TDP for the RTX 3070 is 220W, and the GTX 1080-Ti has a TDP of 250W. Although the RTX 3070 has a lower TDP, it has a reputation for having substantial power spikes when under load that can take out a wimpier power supply. The recommended PSU for an RTX 3070 and GTX 1080-Ti is 650W.

Gaming is the only real performance test that the GTX 1080-Ti comes close to competing with the RTX 3070. Keep in mind that in higher resolutions, the GTX 1080-Ti will start to fall further behind. If you are looking at the 1080-Ti for a creative workstation, as much as it was a workhorse when it came out in 2017, it has been seriously surpassed by the RTX 3070.

There are only two situations I can recommend the GTX 1080-Ti over the RTX 3070 is for a small form factor or for somebody who needs a DVI port on their GPU still. As much as DVI can seem like a dead signal type, there are still needs for it today. Situation number two is if somehow you can find a killer deal on it or they finally climb down off their shortage prices. Though most of the time, it will have to be a pass at its current price.

All in all, it looks like, unfortunately, a purchase of a GTX 1080-Ti would be more of a nostalgia trip than anything else. Who knows? It might be a collector’s item one day!

In gaming at 1080p, the performance is relatively competitive between the two, but with creative workstation uses and simulated stress tests the RTX 3070 blows the GTX 1080-Ti out of the water.

The notable feature included in the RTX 3070 is DLSS (Deep Learning Super Sampling) and Ray Tracing. For the GTX 1080-Ti, a feature it has over the RTX 3070 is a DVI port, making it more backward compatible and lower operating temperature, making it easier to run in small form factor cases.