After the famous PDP-1 in 1960, DEC established a successful business and during the 1960s launched its remarkable 12-bit PDP-8 series of minicomputers. During the late 1960s however, the time had come for the introduction of a 16-bit machine to replace the PDP-8. In 1967, one of DEC’s key design engineers, the 28 years old Edson de Castro was assigned to design a 16-bit machine, with the code name PDP-X. In the spring of 1968 however, the project was canceled and Ed de Castro and some of his friends went off to form another company, Data General, building the initial success of that company on his 16-bit NOVA computer. It seems however that the designed by de Castro PDP-X has little relationship to DEC’s eventual 16-bit architecture, the PDP-11.

The PDP-11 (Programmed Data Processor) was one the (if not the) most successful computers of all times. It began its career as a minicomputer, and ended up as a micro or supermicro/supermini. It was manufactured from 1970 since the early 1990s. Members of its line were sold in very high numbers, more than 600000 computers were sold, thanks to the growing OEM industry. The VAX line of DEC began its life as an enhancement to the PDP-11 architecture, the first VAX computers are sometimes mentioned as PDP11-7xx, in contrast to the official label VAX-11/7xx.

The venerable PDP-11 is still spry to this day, powering a GE nuclear power-plant robotic applications — and will do so until 2050! That’s right!

The first model of PDP-11, (priced 20000 USD), named PDP-11/20, was shipped in the spring of 1970. It had word length 16 bits, speed 800 nanoseconds, the cycle time was 1.5 microseconds and the access time, 0.75 microseconds. The CPU had eight 16-bit registers, six general purpose, the stack pointer and the program counter. Primary memory was magnetic core, 56 Kbytes (28 KWords) maximum (some documentation referred to 32k max memory, but the top 4k was reserved for the I/O space). Initial software included symbolic editor, debugger, utilities. PAL Architecture was UNIBUS. The console is TTY ASR33. The typical I/O was a papertape reader/punch. 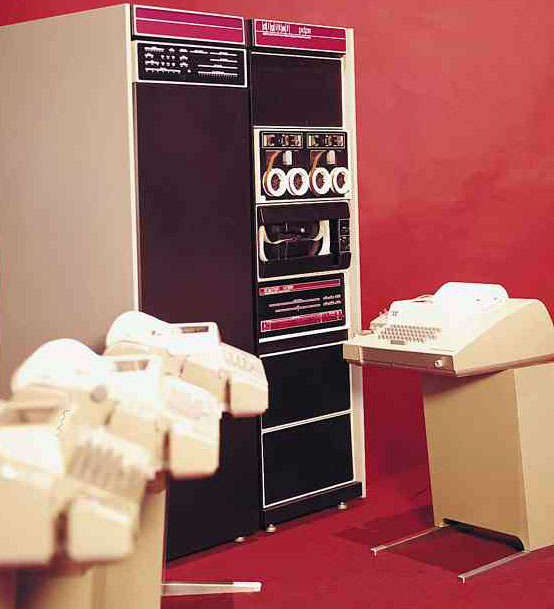 PDP-11 was the first system to run an AT&T UNIX which was written in C. It was also the PDP-11 on which BSD UNIX was first developed.

One of the reasons, which made the PDP-11 so successful, was that it was designed to be produced in a factory by semiskilled labor. All of the dimensions of its pieces were relatively non-critical.

The PDP-11, as the PDP-8 before it, was cloned and copied extensively behind the so-called Iron Curtain, i.e. in Eastern European Socialist countries. A number of plants produced PDP-11 compatible systems in the Soviet Union (СМ-4, СМ-1420/xxx, СМ-1600/xxx, Електроника-xxx, etc.), Bulgaria (СМ-4, СМ-1420/xxx), DDR (SM-1420/xxx), Poland (Mera-xxx), Hungary (SM-4). Nobody knows how much of these clones were issued by many of the plants in the socialist countries, but some believe that the total amounts of units should counted by tens of thousands.