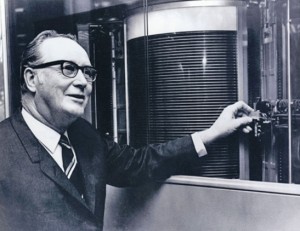 Reynold B. Johnson (1906–1998) was a remarkable American inventor, one of the IBM company’s most prolific inventors, specializing in electromechanical devices. He was an owner of more than 90 patents, and is said to be the “father” of the hard disk drive, automatic test scoring equipment, microphonograph technology, a type of videotape, and talking books.

Johnson received a bachelor of science degree in (science) education administration in 1929 at the University of Minnesota, and obtained his first job at Ironwood High School on the Michigan Peninsula, where he taught mathematics and science. Soon he got a strong conviction that measurement of educational performance was critical to teaching, ant thus started his career as an inventor in early 1930s.

Having entered teaching with those strong convictions about testing, Rey soon began to review his and fellow teachers’ textbooks and their quizzes with the belief that there must be a way to automate the grading task. His first experiments and models made use of holes that students could punch out on perforated test sheets combined with an electrical contact system that switched on lights where answers had been correctly identified. While carrying this idea to application in a potential product, with the investment of much time and effort, he suddenly remembered that pencil marks are conductive and discarded the first path in favor of a better approach using pencil marks to identify the correct answer on the test sheet. This experience of a better idea making obsolete a good idea underlies his subsequent insistence that all possible solutions to a problem must be examined to find the best solution. Critical to his “machine” in its earliest stages was the use of close tolerance, separate answer sheets where pencil marks could be read by machine within wide tolerances for the resistance of the pencil marks themselves. Unfortunately, in 1933 Johnson lost his job as the school was scaled back to a depression era budget. The next many months were hard times even though his ideas had attracted national attention. His efforts were assisted by his fiancée and a teaching colleague, Beatrice (Bea), who wrote a newspaper story about the device.

Fortunately, Professor Benjamin Wood at Columbia University, was a proponent of automatic testing and had been working with IBM, unsuccessfully, to design a machine for this purpose. Johnson knew of Wood’s interest in testing and was able to provide a description and a model for him. Wood informed IBM’s president Watson that the concepts were sound. Rey and Bea were brought to New York City for the evaluation of his ideas and his model. After weeks of discussion, and while Watson was on vacation, Johnson was informed that an analysis showed that his concepts were not acceptable. While Johnson prepared to demonstrate that the analysis was incorrect, Wood took a different route and called Watson to inform him that IBM was about to make a mistake. Shortly thereafter, IBM purchased Johnson’s invention and hired the unemployed high school teacher as a senior engineer in Endicott, New York. The test scoring machine, the IBM 805, was announced in 1937 (some 1000 were produced during the years).

Tests to be scored by the machine were answered by marking spaces on separate answer sheets, which had a capacity of 750 response positions, or 150 five-choice or 300 true-false questions. The answer sheets were dropped into the 805 for processing.

Inside the 805 was a contact plate with 750 contacts (electric fingers) corresponding to the 750 answer positions. Each contact allowed one unit of current to flow when a pencil mark was pressed against it. A scoring key separated the contacts into two groups, the “rights” and the “wrongs.” When an answer sheet was inserted, an amount of current equal to the total rights and total wrongs was allowed to flow. When the operator manipulated the controls, the 805 indicated the scores.

The IBM 805’s speed was limited only by the operator’s ability to insert sheets in the machine and record the scores. An experienced operator could record scores on answer sheets at the rate of about 800 sheets per hour or call the scores to a recording clerk at the rate of 1000 sheets an hour.

Johnson went on to a prolific career in Endicott, where he had fifty-three patents, mostly in the area he called input, before leaving for San Jose, California, in 1951, when he got an offer, that was to change his life and work and to have a major impact on IBM and the computing world. He was asked to move to California to head a new laboratory where IBM would have a better chance to hire the engineers needed to move into the technical areas just being established and to provide closer contact with IBM’s most innovative customers. Johnson was given a charter to define his own programs so long as they did not duplicate the programs of others and he was expected to devote some of his efforts to adapting IBM machines to special customer needs.

With Johnson’s background in data input, then mainly punched cards, programs were soon directed at means of automating the input function. The massive input data source he addressed was the punched-card tub file from which, for each transaction, cards were pulled identifying customer, inventory, pricing and so forth for subsequent punch card processing. The tub file was that eras’ data source with random access to the data. Many configurations were addressed for machine access to stored data. They included magnetic data storage on rigid rotating disks, on drums, on tape strips, and on wires. Early in the life of the new lab, Johnson became convinced that disks offered significant advantages over the other alternatives and, despite obvious unsolved problems, directed the laboratory in that direction. His belief in the inventive capabilities of his staff was rewarded when in a relatively short time, from present perspectives, air bearings were providing close spacings to rotating (and wobbling) disks, the electronics of read-write heads was taking shape, and the disk and its magnetic coating were in early definition. The new disk file was then defined as a five million-character machine, and the IBM 350 Random Access Method of Accounting and Control was established. 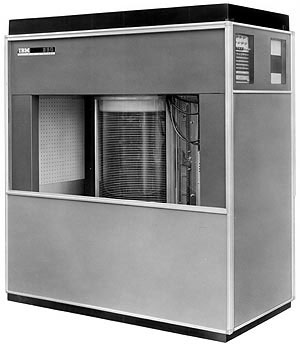 The product was transferred from Rey’s lab to a new development lab and subsequently was shipped in September 1956 under the name IBM 350 Disk Storage, integrated in the IBM’s new model computer—IBM 305 RAMAC (Random Access Memory Accounting) system. Nothing interesting as a design, it was one of the last vacuum tube systems designed in IBM, but… it introduced disk storage technology to the world, so it became a market hit and more than 1000 305s were built before production ended in 1961.

The 350 Disk Storage Unit consisted of the magnetic disk memory unit with its access mechanism, the electronic and pneumatic controls for the access mechanism, and a small air compressor. Assembled with covers, it was 150 cm long, 170 cm high and 72 cm deep. It was configured with 50 24-inch magnetic disks containing 50000 sectors, each of which held 100 alphanumeric characters, for a total capacity of 5 million characters. Disks rotated at 1200 rpm, tracks (20 to the inch) were recorded at up to 100 bits per inch. The execution of a “seek” instruction positioned a read-write head to the track that contained the desired sector and selected the sector for a later read or write operation. Seek time averaged about 600 milliseconds. The disk system cost some $10000.

Biography of Reynold B. Johnson

Rey was raised on his family’s farm, where from the beginning he showed a keen mechanical talent. At an early age he built a submersible submarine, which he exhibited in the horse trough. After completion of his early schooling in Dassel, Rey attended and graduated from the Minnehaha Academy High School in Minneapolis in 1925. His older sisters are said to have taken a keen interest in his education. Then he went on to graduate from the University of Minnesota (BS in Educational Administration, 1929).

After graduation Johnson worked for Ironwood High School on the Michigan Peninsula, where he taught mathematics and science. He lost his job during the Great Depression in 1933, but was hired by IBM in 1934, worked there until 1971, and when he retired he had at least 90 patents to his name, but he had not finished inventing. At his own Education Engineering Associates consulting company in Palo Alto, he developed a microphonograph that allows children to point a hand-held device at a picture or word in a book and hear it tell them what it was. He was awarded the National Medal of Technology in 1986 by President Ronald Reagan.

Johnson was also responsible for the half-inch videocassette tapes used by Sony for long time. While on loan to Sony for another project, he came up with a prototype of a VCR tape less than half the width of the tape Sony was then putting on reels.

Rey Johnson married to his teaching colleague Beatrice Pearl Rashleigh (2 Mar 1908–13 Feb 2004), and they had a daughter (Karen) and two sons, Philip and David.

Rey Johnson died on 15 September 1998, at the age of 92, of metastatic melanoma at Palo Alto, California.