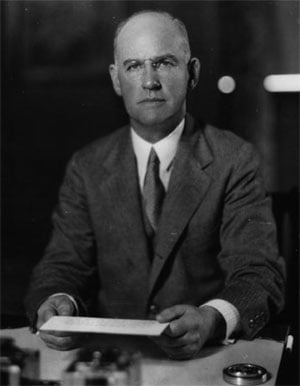 The primary object of the invention is to combine with a registering mechanism a series of type-bars and type. It comprises a series of keys representing the letters of the alphabet and a second series of keys representing the digits. Each key of both series is provided with a type-bar and a type, and a carriage bearing a platen is arranged to retain a paper strip in position to receive impressions when the type are actuated by the keys in the manner of the ordinary type writer. The keys representing the digits are, however, provided with means whereby when desired they are thrown into operative connection with the registering-wheels, by means of which any amount or number printed upon the paper strip by the type may be also added upon the registering, if desired. 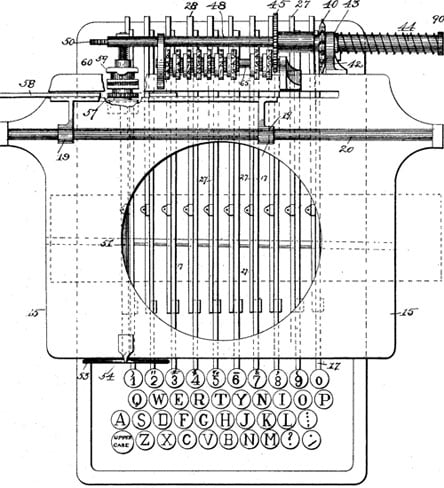 To illustrate the use of the device, suppose the operator of the machine to be making out an itemized bill. It is written out just as on a type-writer; but before striking the keys printing the amount the operator moves a dial which throws the digit-keys into operative connection with the registering-wheels, and such amounts, besides being printed on the paper strip, are registered, as already described.

For ordinary use the device is operated in a manner usual to type-writers. Should, however, it be desired to register an amount—say, for example, five cents—I move the dial-plate till the pointer engages the “cents” notch, which causes the clutch-members to engage, thereby throwing the registering-wheels into operative connection with the key-cams. I then strike the “period” key, which prints that character upon the paper sheet in the platen. I next press the “0” key, which likewise prints that character upon the paper strip, but registers nothing, as neither the “period” key nor the “0” key is provided with a key-cam.

The gear 50, being fast upon the dial-shaft and engaging the rack 19, moves the gear 45 into engagement with the proper registering-wheel, as already described. Then when the desired digit-keys are operated the amount is duly recorded upon the registering-wheels, and the gear 50 is moved backward step by step toward normal position. The clutch member 59 simultaneously turns back toward normal position, and as the stud enters the narrowed portion of the annular groove 60 the clutch members are forced apart and become disengaged when the gear 50 reaches normal position.