Alfred Smee – Biography, History and Inventions Alfred Smee Alfred Smee (1818-1877) was a senior surgeon to the Royal General Dispensary and […] 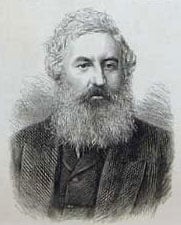 Alfred Smee (1818-1877) was a senior surgeon to the Royal General Dispensary and to the Central London Opthalmic Hospital, and also a Fellow of the Royal Society. He is known for publishing a series of books on a field he called electro-biology, the relation of electricity to the vital functions of the human body. Smee determined to study how the functions of the brain are related to the electrical stimulation of the nervous system. He argued that instinct and reason could be deduced from electrobiology, which was rather extraordinary idea for that time.

In 1851, Smee published his most important book, Process of Thought Adapted to Words and Language, which, he stated, is a deduction from the general system of Electro-biology. He planned to produce an artificial system of reasoning based upon natural principles, one that processes ideas in the same way that the human nervous system processes them.

Little was known about the brain in the middle of 19th century, and there were no good tools for its study. That’s why Smee had to rely on speculation rather than experimentation to gain his understanding of human thinking. The outcome of these speculations was his electro-biological machine.

According to his theory, each idea is determined by the presence or absence of certain properties (redness, roundness, etc.), and each property is represented in the brain by the electrical stimulation of a nerve fiber. Thus, for Smee, an idea consists of a collection of electrically stimulated nerve fibers. Using the technology of the 19th century, the machines Smee conceived for presenting his ideas were entirely mechanical.

Smee’s Relational Machine (so called because it represented the relationship between the various properties, comprising an idea), was intended to represent one thought, idea, or mental image at a time. One version of it was constructed from a large piece of sheet metal, repeatedly divided into halves by metal hinges. Half of the metal would represent the presence of a property, the other—the absence. The metal flaps, representing absent properties, would be folded out of sight until all that remained was a piece of metal representing the collection of properties that formed the idea.

Smee designed a second machine to compare ideas. It was called Differential Machine and consisted of two Relational Machines, linked together by an interface, able to compare the properties represented by each Relational Machine and then to judge whether the ideas agree, probably agree, possibly agree, or disagree. Representation of ideas and judgments about them, the tasks his machines were designed to do, comprised the entire rational thinking faculty for Smee.

Smee was confident his machines could model human thought. He was concerned, however, about the feasibility of constructing his machines, because of the elaborate mechanical engineering involved and the problem of scale. He wrote in Process of Thought that:
…when the vast extent of a machine sufficiently large to include all words and sequences is considered, we at once observe the absolute impossibility of forming one for practical purposes, in as much as it would cover an area exceeding probably all London, and the very attempt to move its respective parts upon each other, would inevitably cause its own destruction.

It is unknown whether Smee has built workable models of his machines. Most probably only small scale models were made (even this is doubtful), as Smee realized that his hope for a machine that could represent the natural processes of thought and judgment was beyond his reach. Nevertheless, his books were popular in the middle of 19th century and spread his conviction of the possibility of mechanized thought.