In today’s article, we are going to check out two entry-level gaming graphics cards from Nvidia: The GTX 1070 vs 1660-Ti. Even though they may be a bit older, these GPUs still pack a punch. Whether you are gaming, streaming, editing videos, or doing graphic design work, it is important to have a graphics card up to the task. If you are considering one of these graphics cards, you may be wondering: How do they compare, and which one is better?

We’re going to start with a full side-by-side comparison to see just how these two GPUs stack up against each other. Then we’ll discuss some important differences and see how they perform when put to the test in gaming benchmarks.

Knowing the specs of your graphics card is extremely important, especially if you want to know which one is better. While the GTX 1070 are similar graphics cards, they also have their differences that make each one ideal for a different set of tasks. Check out the comparison below:

As you can see from the comparison, the GTX 1070 is the clear leader when it comes to raw specs, outshining the GTX 1660-Ti in almost every way. But does this difference translate to a noticeable increase in performance when it comes to real-world use?

Nvidia released the GTX 1070 in June 2016, and it was one of the first graphics cards based on the new 16nm Pascal architecture. At the time, it was one of the best GPUs on the market, following closely behind the Nvidia GTX 1080 series cards. Designed to replace the GTX 970, the GTX 1070 was an improvement over the previous generation in every way, providing gamers with remarkable levels of performance for the latest games.

The only competition from AMD that could stand up to the GTX 1070 was the RX 580 or the RX Vega 56. Neither one of these offered the performance-enhancing utilities that Nvidia offered such as G-Sync, Nvenc, and more advanced Ray Tracing capabilities.

The closest competitor from AMD was the RX 5600 XT, which was released a few months after the GTX 1660-Ti. Being dubbed as the “ultimate 1080p gaming experience” AMD also made the Radeon RX 590, which provided some competition to the GTX 1660-Ti.

The good news is almost every prebuilt and custom PC out there has a power supply with higher wattages than these cards demand. Odds are, that as long as you have a spare 8-pin power connector, your current power supply is enough to support either one of these graphics cards.

As for size, both the GTX 1070 and GTX 1660-Ti are relatively small compared to some of the higher-performance graphics cards on the market. The GTX 1070 comes in at about 10 inches, which is still fairly large, especially if you have a smaller PC case. The GTX 1660–Ti is more manageable, measuring around nine inches in length.

Both GPUs offer the same connectivity options, although the GTX 1070 can support a higher number of additional monitors. With DVI, HDMI, and DisplayPort connectors on each card, you will be able to run at least 3 monitors with either of these GPUs.

When it comes to graphics cards, gaming performance is usually one of the most important factors in determining which one is a better buy. Since both the GTX 1070 and 1660-Ti are designed specifically as gaming GPUs, they both far exceed the minimum requirements for almost every game out there, and they exceed the recommended requirements for about 80% of all games on the market right now.

We’ve compiled some benchmarks from the most popular games to determine what you can expect when gaming on these graphics cards.

Both the GTX 1070 and 1660-Ti show some pretty impressive results when put to the test, but the clear winner is the GTX 1070. With higher frame rates across the board, the GTX 1070 definitely delivers higher gaming performance. The only game that ran better on the GTX 1660-Ti was Fortnite. If you are a big Fortnite player, the 1660-Ti may be your ideal graphics card, otherwise, the GTX 1070 is definitely the way to go.

With a clear distinction in performance, it is no doubt that the GTX 1070 is the winner here. Despite being a few years older, the GTX 1070 packs more powerful hardware under the hood to stand up to your demands. With more VRAM, higher shader core count, and higher clock speeds, the GTX 1070 outshines the GTX 1660-Ti by a good margin.

The difference in gaming performance is not that great, however, and if you are on a budget, the GTX 1660-Ti may be for you. If you can put up with having slightly lower frame rates, and not running all of the latest games on the highest settings, then you will be more than satisfied with the GTX 1660-Ti.

It all comes down to price vs performance. The GTX 1070 delivers better performance but at a slightly higher cost. The GTX 1660-Ti on the other hand does not match the level of performance found in the GTX 1070. It makes up for this by being a little bit cheaper. Ultimately either card is an excellent choice for an entry-level gaming PC.

*Currently, there are no available Nvidia GTX 1660-Ti graphics cards available on Amazon. We recommend a compatible card from EVGA. 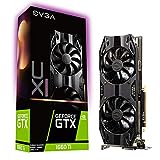 Both cards have full support for DirectX-12 and make excellent entry-level gaming graphics cards. With a dual-slot form factor, each card packs in DVI, HDMI, and Display-Port connectors for maximum connectivity.