While most gaming laptops have powerful components, they are often tuned down for thermal design and energy efficiency. Having a laptop with a powerful graphic card like the GTX 1050 mobile 2GB from Nvidia makes all the difference. How powerful is this card? What laptops carry it? Stick around as we dive deep into the specs, product overview and history of the GeForce GTX 1050, and find out how it stacks up against its PC sibling with gaming benchmarks. Ultimately, you’ll know whether this GPU is right for you. 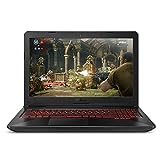 The GTX 1050 mobile is based on the GP107 graphics architecture and is the natural successor to the aging GTX 950 series cards. It was launched in January of 2017, specifically for use in laptops.

Some of the largest brands immediately began using the GTX 1050 mobile in their gaming laptops. Acer Aspire Nitro 5, and Acer Predator series laptops featured this GPU. Other brands such as Dell and Asus also used the GTX 1050 mobile in iconic laptops as the Dell XPS 15, and the Asus TUF Gaming series laptops. As an entry-level GPU, some laptops under $1000 used this card.

AMD and Nvidia have been competitors, and things are no different when talking about the GTX 1050 mobile. AMD’s answer to the GTX 1050 is the Radeon RX 460. It was released around the same time as the GTX 1050. According to benchmarks, these two GPUs are extremely similar, although the GTX 1050 does take the lead in some areas.

Laptops that Use this GPU

Some of the biggest laptop brands in the industry use the GTX 1050 as the discrete graphics card in their gaming laptops. Most laptops that use the GTX 1050 use the 4GB model as opposed to the 2GB model, although it is still possible to find laptops with this GPU. One of the best deals today can be found in the Microsoft Surface Book 13.5″ laptop, which comes with a Kaby Lake processor from Intel, and 16GB of RAM.

Another good choice that features the GTX 1050 2GB is from Asus. The Vivobook X560 and Vivobook Pro N705 both use the GTX 1050 2GB. Both laptops feature Kaby Lake processors and can be found for less than $1000.

Additionally, we figured there might be some noticeable discrepancies between the performance offered by the desktop and mobile versions, so we compared both for you here. We compiled benchmarks from some of the most popular games, running on the highest settings to give you a feel for how the GTX 1050 mobile performs compared to its desktop counterpart. Check out the table below to see for yourself:

As expected, the desktop version of the GTX 1050 is slightly better. But don’t let that dash your hopes for gaming on a laptop. Remember, GTX 1050 mobile is packed into a smaller space and can run on battery power. You can get a decent performance from it.

If you want a gaming graphics card that can perform similarly to a desktop, the GTX 1050 mobile is a solid choice. You won’t be playing the most demanding games, but most games still show decent frame rates.

Although you might expect the mobile version of any GPU to be significantly tuned down to fit into a laptop, that is not the case with the GTX 1050 mobile. When comparing the mobile version of the card to the desktop version, you can see that Nvidia kept both chips extremely similar in specs. Additionally, whether you are using the mobile or desktop version of the GTX 1050, you can expect reasonably similar performance. Have a look at the table below to see for yourself:

In contrast, there are numerous benefits to going with a full-size desktop graphics card. Unlike the mobile version of the GPU, you have a larger and more efficient cooling system, overclocking abilities, and the ease of upgrading if you desire. The main disadvantage to a mobile GPU is that it is often impossible to upgrade without buying an entirely new laptop.

When shopping around for gaming laptops, an energy-efficient GPU is a necessity. GTX 1050 mobile has a TDP rating of 75 watts and is on par with less powerful GPUs from AMD. The good news is that it can perform at a high level while using very little power.

The cooling system will depend heavily on the specific laptop you buy. Unlike the desktop version of the GTX 1050, which uses a standard heatsink, fans, and dual-slot cooling system, the mobile version needs to be much more condensed. Most laptops will employ a thermal design to cool this GPU, but you will typically experience higher operating temperatures and a potentially shorter lifespan if not taken care of.

If your laptop overheats, try to use a laptop cooling pad. Try to replace the thermal paste between the graphics processor and the heatsink if the cooling pad doesn’t help. Most laptops will need servicing after a few years. This won’t be a concern if you are buying a new laptop.

You find a good deal on a laptop with this card in it. 1050 GTX is a solid choice for entry-level gaming, and some laptops still have this GPU.

You need the latest and greatest performance. This GPU is decent if you can find it at a good price, but it does not compare to the latest high-end offerings from Nvidia and AMD. There are better graphics cards if you want the best frame rates.

Check out the Asus TUF Gaming Laptop with a mobile GTX 1050 card on Amazon.

The GTX 1050 mobile 2GB is a discrete graphics card designed by Nvidia for use in gaming laptops. It is a very popular choice among gamers looking for a solid entry-level GPU for gaming.

Though not as good as the desktop version, the GTX 1050 mobile 2GB still delivers comparable performance. You won’t be gaming in 4K, but this card is very good at playing most games at full 1080p HD.

For an entry-level card, the GTX 1050 mobile delivers decent benchmark performance. It will get you started with light PC gaming, video editing, and graphic design work, all while staying reasonably priced.

Although the desktop version of this card launched with an MSRP of just $109, the mobile version is dependent on which laptop it is installed in. The good news is most laptops that use the GTX 1050 mobile go for less than $1000.