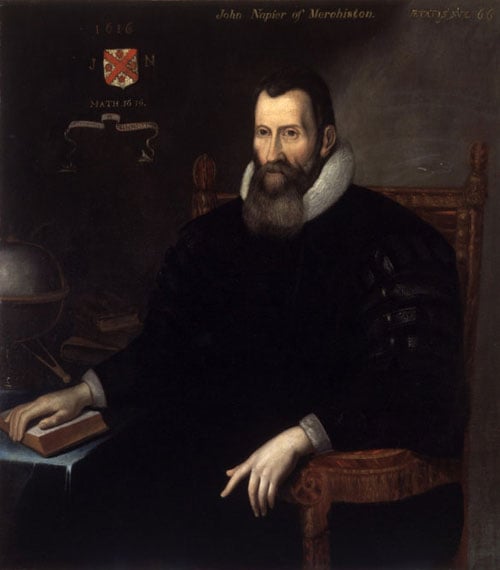 John Napier (John Napier frequently signed his name “Jhone Neper, Fear of Merchiston”, but later on we can find his name also as Napeir, Nepair, Nepeir, Napare, Naper, Naipper, Neperus, etc., the only form of Napier that for sure would not have been used in Napier’s lifetime was the present modern spelling “Napier”!) was born on 1 February, 1550, in Merchiston Castle (or Tower as it was usually called in those days), in the vicinity of Edinburgh, Scotland, as the first child of Sir Archibald Napier (1534–1608), 7th Laird of Merchiston and Baron of Edenbellie. 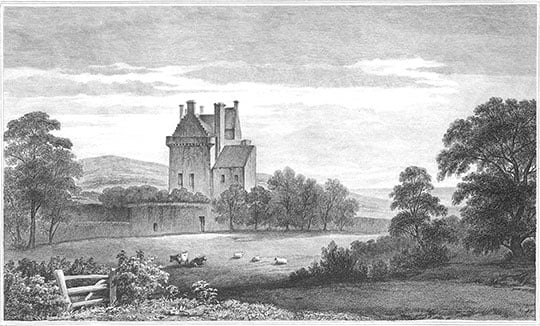 Napiers was one of the most important Scottish families at the time. The second Napier was Controller of the King’s Household and ambassador. The third sat in Parliament, and several received the honour of knighthood. Three of them fell in battle (between them John Napier’s grandfather and great-grandfather). During the 15th century no fewer than 3 Napiers were provosts of Edinburgh.

Sir Archibald Napier fully maintained the repute of his ancestors for energy and sagacity. He had studied the laws, and was a proficient in the mathematics. In 1549, being only 15 years old, Archibald married to Janet Bothwell (1534-1563), a daughter of member of Parliament Francis Bothwell and sister of Adam Bothwell, Bishop of Orkney. The next year was born his heir John, then two other children—Francis and Janet.

Archibald Napier was a justice-depute and was knighted in 1565. After some troubles during the civil war in the 1560s and 1570s, Archibald was back in favour and in 1582 he was appointed Master of the Mint in Scotland, with the sole charge of superintending the mines and minerals within the realm, and this office he held till his death in 1608. The family also owned estates at Lennox and at Menteith and a residence at Gartness. Sir Archibald must have been very wealthy, and John inherited from him an estate sufficient to live well on.

Three years before the birth of John, in 1547, Alexander Napier, John’s grandfather, had been slain while fighting in the army of Mary Queen of Scotland against the English at the Battle of Pinkie. Later John Napier would spend most of his life trying not to get involved in the sectarian strife that swept Scotland.

As was the practice for members of nobility, Napier did not enter school until he was 13, being rather taught at home. When he was 13, in October 1563, he entered St Andrews University (he was registered as Johannes Neaper). His mother arranged for him to live in St Salvator’s College (see the photo below), the oldest of the three endowed collegiate societies of the university, and special arrangements were made for the principal of the college, John Rutherford (1515-1577), the most distinguished teacher of his day in Scotland, to take care of him personally. Rutherford was an able academic and, besides adding to Napier’s anti-Rome views, gave him a good grounding in Latin and the other subjects then taught at the college. Napier wrote many years later that it was in St Andrews that he first became passionately interested in theology, but there he studied also Latin and mathematics.

Unfortunately, on 20 December, 1563, only two months after Napier matriculated at St Andrews, his mother Janet died only 29 years old. Later on in 1571 Sir Archibald married to a cousin, Elizabeth Mowbray, by whom he had ten children—(Sir) Alexander (of Lauriston); Archibald (of Wowmet); Walter; William; Susanna; Abellina; Agnes; Helen; Marion; and Elizabeth. 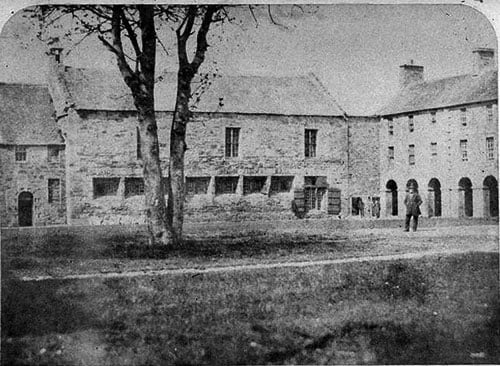 Little is known about John Napier’s early years. One of the few scraps of information that we have is from a letter from the Bishop of Orkney, John’s uncle, to Archibald Napier written when John was eleven years old:

(Let’s translate to English the old Scots that the Bishop of Orkney actually wrote):

I pray you, sir, to send your son John to school; over to France or Flanders; for he cannot learn well at home nor get profit in this most perilous world—that he may be saved in it;—that he may seek honor and profit as I do not doubt that he will… 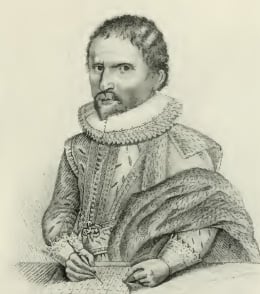 For unknown reason, Napier had not remained long enough at St Andrews to get a degree. His name didn’t appear appear in the list of determinantes for the year 1566, and of masters of arts for 1568. Most probably in 1567 Napier was forced to study abroad, having left St Andrews University prematurely (probably after his friendship with a Catholic student—according to Napier’s own account, he had there “contracted a loving familiaritie with a certaine gentleman, a Papist”). Even this was thought inadvisable in such sensitive times. Anyhow, Napier left the University without taking a degree and went abroad for several years.

Absolutely no evidence exists in which European country Napier studied (University of Paris is highly likely and it is also probable that he spent some time in Italy, Germany and the Low Countries), but when he returned home in 1571, he was a scholar competent in Greek, and applied himself closely to the study of the mathematics.

In 1571 Napier returned in Edinburgh, to find his father imprisoned in Edinburgh Tower by the Queen’s party, while the family home at Merchiston was occupied by the forces of the Regent, then besieging the town. The following year, 1572, when Merchiston Castle was bombarded by the guns of Edinburgh Castle, Napier sought refuge on one of the family estates at Gartness in Stirlingshire. In 1571, the preliminaries of his marriage were arranged at Merchiston, to Elizabeth Stirling (1554-1579, see the image below), the daughter of a neighboring landowner, Sir James Stirling, 4th Laird of Keir and of Cadder and a friend of his father. The couple married towards the close of 1572. Most of the estates of the Napier family were made over to John Napier and a castle was planned for the estate at Gartness. When the castle was completed in 1574, Napier and his wife took up residence there. 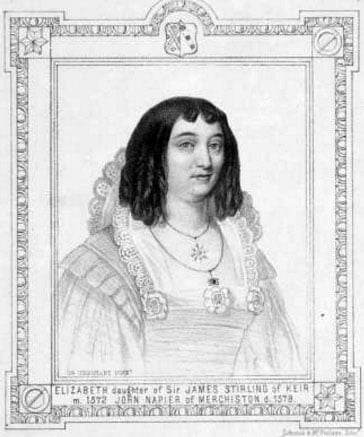 Napier devoted himself to running his estates. This task he took very seriously and, being a great genius as an inventor, he applied his skills to these tasks. He approached agriculture in a scientific way and he experimented with:

… improving and maturing of all sorts of field land with common salts, whereby the same may bring forth in more abundance, both of grass and corn of all sorts, and far cheaper than by the common way of dunging used heretofore in Scotland. 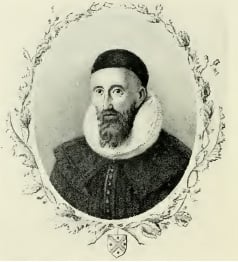 About the end of the year 1579 Elizabeth Stirling died, leaving him one son, Archibald (1576-1645) (who in 1627 was raised to the peerage by the title of Lord Napier), and one daughter, Joan (the twins Agnes and Barbara died in infancy). Next year, 1580, John Napier married again, his second wife being Agnes Chisholm (the second cousin of the Napier’s first wife, from the same Chisholm family that had provided his grandfather’s second wife, daughter of Sir James Chisholm of Cromlix, and great-granddaughter of King James IV), who survived him. By her he had five sons and five daughters. On the death of his father in 1608, Napier and his family moved into Merchiston Castle, where he lived the rest of his life.

Napier’s father had been deeply interested and involved in religious matters, and Napier himself was no different. Because of his inherited wealth, he needed no professional position. He kept himself very busy by being involved with the political and religious controversies of his time. For the most part, religion and politics in Scotland at this time pitted Catholics against Protestants. Napier was anti-Catholic, as evidenced by his 1593 book against Catholicism and the papacy entitled A Plaine Discovery of the Whole Revelation of St. John. This work suggested that the Antichrist of the Book of Revelation was none other than the reigning pope, and urged James VI, the Scottish King, to “purge his house, family and court of all Papists, Atheists and Newtrals.” This attack was so popular that it was translated into several languages and saw many editions. Napier always felt that if he attained any fame at all in his life, it would be because of that book.

After the publication of the Plaine Discovery, Napier seems to have occupied himself with the invention of secret instruments of war. There is a document, dated the 7th of June 1596 and signed by Napier, giving a list of his inventions for the defence of the country against the anticipated invasion by Philip of Spain. The document is entitled “Secrett Inventionis, proffitabill and necessary in theis dayes for defence of this Iland, and withstanding of strangers, enemies of God’s truth and religion,” and the inventions consist of:

• a mirror for burning the enemies’ ships at any distance;

• a piece of artillery destroying everything round an arc of a circle;

• a round metal chariot, so constructed that its occupants could move it rapidly and easily, while firing out through small holes in it.

It has been asserted that the piece of artillery was actually tried upon a plain in Scotland with complete success, a number of sheep and cattle being destroyed 🙂 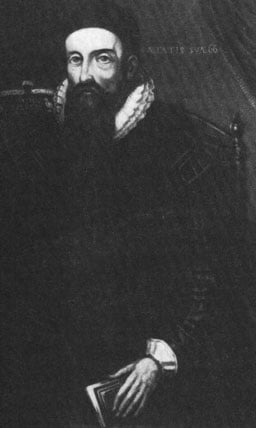 As a person of high energy and curiosity, Napier paid much attention to his landholdings and tried to improve the workings of his estate. Around the Edinburgh area, he became widely known as Marvelous Merchiston for the many ingenious mechanisms he built to improve his crops and cattle. He experimented with fertilizers to enrich his land, invented an apparatus to remove water from flooded coal pits, and bat devices to better survey and measure land.

Napier had a great interest in astronomy, which led to his contribution to mathematics—logarithms and Napier’s bones. He was not just a star gazer; he was involved in research that required lengthy and time consuming calculations of very large numbers. Once the idea came to him that there might be a better and simpler way to perform large number calculations, Napier focused on the issue and spent twenty years perfecting his idea.

It would be surprising if a man of such great an intellect as Napier did not appear rather strange to his contemporaries and, given the superstitious age in which he lived, strange stories began to circulate. Like Johannes Kepler and all his contemporaries Napier believed in astrology, and he certainly also had some faith in the power of magic, for there is extant a deed written in his own handwriting containing a contract between himself and Robert Logan of Restalrig, a turbulent baron of desperate character, by which Napier undertakes to serche and sik out, and be al craft and ingyne that he dow, to tempt, trye, and find out some buried treasure supposed to be hidden in Logan’s fortress at Fastcastle, in consideration of receiving one-third part of the treasure found by his aid.”

Napier first described the decimal point, enabling calculations to be made without the use of complex fractions. He discovered what eventually would be called “Pascal’s Triangle” and placed it in common use long before Pascal was even born. 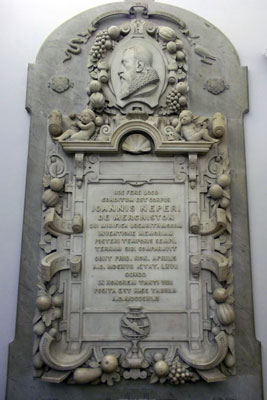 One of the greatest men of Scotland—John Napier, died on 3 April, 1617, apparently of goat, with which he had long been afflicted, and was buried in the graveyard (crypt) of the old church of St Cuthbert’s (formerly known as the West Kirk), then outside the West Port of Edinburgh.