Does it really matter which brand you choose for your portable speakers, your soundbars, or your surround sound system? After all, they all do the same thing, right? Well, the choice between two audio brands can be far more significant than you might think. Looking at JBL vs Bose only confirms this. The two audio brands have been around since the mid-20th century, but they couldn’t be more different. So how do the two compare?

JBL and Bose both manufacture surround sound speakers. Both brands have their own wireless Bluetooth speakers and earbuds for sale. What’s more, they have been competing against each other for nearly 60 years now. But what is it that truly sets JBL and Bose apart? Let’s take a closer look at the key differences between the two.

JBL vs Bose: Side by Side Comparison

JBL vs Bose: What’s the Difference?

Despite the fact that both brands occupy space in the high-end audio product industry, JBL and Bose have a series of key differences that set them apart from each other. You wouldn’t be wrong for assuming the two achieve essentially the same functions. After all, how different could two speaker brands truly be? But it’s worth pointing out that JBL and Bose are quite different in spite of their similar offerings. Just how different, though? Let’s take a look.

Over the decades, JBL and Bose have differed tremendously in terms of their respective offerings. Overall, JBL has been known to focus more on professional equipment, while Bose has focused on in-home equipment. JBL has long been the standard brand for concert venues, recording studios, movie theaters, and the like. Bose has a stake in the game with these professional outlets, to be sure, but the majority of their customers are decidedly not audio engineers or music industry pros.

That’s not to say JBL doesn’t have products for the casual listener in their catalog, however. Both JBL and Bose have Bluetooth speakers, television soundbars, and headphones on the market. However, there’s a distinct difference in terms of the kind of audience that each brand targets. JBL has enjoyed the attention it has been receiving from professionals since its inception, while Bose has never been about that specific target audience. Founder Amar Bose was always more concerned with delivering a quality in-home stereo system.

This leads right into a discussion about audio quality — a controversial topic for even the most experienced audiophiles. Bose has long been known as the brand that refuses to disclose specific numbers and figures concerning the quality of its audio. The company insists that these objective stats and specs simply can’t do justice to the actual sound and feel of a good Bose surround sound system. While it’s true that numbers fall short of actually engaging the senses, it is nevertheless frustrating that Bose plays it so coy with their specs.

Unlike Bose, JBL is not at all secretive with its audio specs. Look at any one JBL speaker or product on their retail site, and you’ll find detailed figures pertaining to frequency response, sensitivity, nominal impedance, crossover frequencies, enclosure type, and more.

Perhaps one of the most important criteria is price. What does the JBL vs Bose debate actually look like in terms of price tags? Well, it depends on what kind of product you’re looking for. As far as sound systems are concerned, Bose offers a pair of Bose Surround Speakers 700 for $599. JBL, on the other hand, offers a similar product — the Studio 580 — for a price of $299 for just one speaker. The brands’ respective Bluetooth speaker prices tell a similar story; both Bose’s SoundLink Flex and JBL’s Charge 5 go for $149.

Given the popularity of AirPods and their competitors, it’s also worth going over the cost of the wireless earbuds from JBL and Bose. The most affordable pair from Bose — the Bose Sport Earbuds — go for $149, while the most affordable pair from JBL — the JBL Live 300TWS — go for as little as $39.99. This is a clear advantage for JBL. The pair again tie for most affordable soundbar, with both Bose and JBL offering a base model for just $199. It seems neither brand wants to give the other guy any sort of leg up with their pricing, which makes this the most competitive distinguishing factor of all.

5 Must-Know Facts About JBL and Bose

The History of JBL 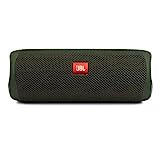 Even though JBL wasn’t founded until 1946, founder James Bullough Lansing — JBL himself — had been in the speaker business since at least 1927. Originally operating under the name Lansing Manufacturing Company with his business partner Ken Decker, Lansing and Decker began working with MGM sound man Douglas Shearer to develop the Shearer Horn. Their experience with the development of this product inspired them to stick with the speaker business. The Lansing Manufacturing Company continued to work with Shearer and his movie theater loudspeakers until Decker’s death in 1939.

After this and the subsequent sale of Lansing Manufacturing Company, Lansing started his own company – James B. Lansing Sound, or JBL for short. The next decade of Lansing’s life was plagued by financial and personal struggles, leading to Lansing’s own death in 1949. JBL was put in the hands of VP Bill Thomas, who successfully pulled the company from the brink of collapse and helped it achieve widespread success in the following decades. Thomas sold the company in 1969, which ushered in another new era for the audio brand.

Throughout the 1970s, JBL saw widespread adoption in music studios across the nation. This is what much of the ’70s and ’80s consisted of for JBL’s business; more professional equipment for audio engineers, and fewer in-home sound systems. It wasn’t until the late ’80s and early ’90s that JBL made a pivot toward the latter. Still, at the same time, JBL remains an essential brand for audio professionals. For instance, JBL tech plays a vital role in THX cinema sound systems throughout America and abroad. JBL is also still a prominent name in recording studios and concert venues.

Bose’s rise to fame is a little different than JBL’s. While it’s a brand that’s been trusted since the mid-20th century, Bose is pre-dated by JBL by close to 20 years. When Bose emerged as an audio equipment manufacturer in 1964, JBL had already undergone several changes and was nearing its sale, as well as its eventual company-wide shift toward professional audio recording equipment. This didn’t matter in these early years, though, as founder Amar Bose, a professor at MIT, was only interested in creating a quality home stereo system.

With the help of some angel investors, Amar Bose was able to do exactly that. Unfortunately, this first Bose offering — the Bose 2201 — was less than successful. In less than four years, it had already been discontinued due to poor sales and poor reception. Amar went back to the drawing board, and in 1968, he had a new and improved product – The Bose 901. Those familiar with audio equipment will know that the 901 was an instant success, and it remained in production for 48 years until its eventual discontinuation in 2016.

The Bose 901 was exactly what Amar needed to succeed. He was able to leave his position at MIT and continue to nurture his burgeoning audio brand into the industry titan we know it as today. Bose spent the ’70s and ’80s expanding beyond in-home sound systems to include automotive speakers, headphones, PA systems, and beyond. By the end of the 1990s, Bose had opened a series of retail locations and several manufacturing facilities in the United States, Mexico, China, and Malaysia. Today, they remain a pillar of the high-end audio industry alongside JBL.

JBL vs Bose: Which One Is Better?

JBL vs Bose: Which One Should You Use?

Even after taking an in-depth look at the JBL and Bose brands, it’s still difficult to say which audio brand is best. We know that JBL is a much more higher-end option than Bose, but we also know that Bose is often the more affordable choice. Likewise, we know Bose is quite secretive with their specs, while JBL clearly has nothing to hide.

Additionally, it’s clear both brands have just about every kind of audio product imaginable within their respective catalogs. With all of this in mind, it’s still a close call. Ultimately, though, the winner has to be JBL.

Bose has been around for decades and remains the best-selling audio brand on the planet. There’s no way around this fact. However, being the best-seller doesn’t directly translate to being the best. JBL deserves that distinction for its superior audio quality, more illustrious history in the industry, and the number of products that are cheaper than the Bose alternative. Bose is still a very good, very dependable brand, but if you want the best — no matter the cost — then you have to consider JBL.

Yes, Bose has many Bluetooth speakers as well as wireless headphones and earbuds in their catalog.

JBL is owned by Harman International Industries (which, in turn, is owned by Samsung Electronics).

Does JBL have Bluetooth speakers?

JBL has many Bluetooth speakers, headphones, and earbuds in addition to traditional wired speakers and sound systems.

Who came first, JBL or Bose?

JBL pre-dates Bose by almost two decades. The former was founded in 1946 while the latter emerged in 1964.

Did the Bose 901 get discontinued?