The 2022 iPad Pro 11-inch is the latest generation of Apple’s premier tablet. Though the tablet looks the same as its predecessor, released in 2021, it does have some improvements that make it worth the investment.

For example, it has an upgraded M2 chip that considerably improves processing time, speed, and graphic performance. If you are considering buying the device for the first time, the iPad Pro 11-inch may be the device for you.

However, if you want to upgrade, you should opt for a used or refurbished unit to save on cost. Read on for more information on the iPad Pro 11-inch used.

Apple announced the latest generation of the iPad Pro 11 on October 18, 2022, with customers able to make pre-orders on the same day. It was then released in stores on October 26, 2022.

The launch price of the Wi-Fi model was $799, but customers had to pay an additional $200 to get the Wi-Fi + Cellular model. The current price of the latest generation is still the same. However, you can find used iPad Pros at lower prices.

There are two different models of the iPad Pro, namely:

The latter of the two models is more expensive. 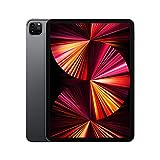 The latest generation of the iPad Pro 11 inch, released in 2022, is slightly different compared to previous generations. For instance, it is longer and broader yet slimmer than iPads released before 2020. Its dimensions are 247.6mm x 178.5mm x 5.9mm, while the Wi-Fi models weigh 1.03 pounds and 1.04 pounds for the Wi-Fi + Cellular model, respectively.

The phone also has a 12 MP rear camera and a 12 MP TrueDepth front-facing camera. The device is encased in aluminum, with customers having the choice of buying a silver or space gray color tone.

When refurbished iPad Pro 11-inch devices became available on the market, we had our team on hand to purchase a unit before the first batch of stock ran out. Since its purchase, we have had one week to use it and scrutinize its features before publishing a comprehensive review.

The team decided to buy the space gray-colored iPad. In the box were the iPad Pro 11 inch, a one-meter-long USB-C charging cable, and a 20W USB-C power adapter. There were also a couple of Apple stickers in the box for those who like flaunting their love for the brand.

The first thing you notice when you remove the 2022 iPad Pro from the box is the lack of change in the design. The 2022 iPad Pro has the exact dimensions as the 2021 version. The appearance of the iPad Pro has been one of its endearing features. Hence, there was no need to change a design that pleases customers.

The tablet has its back and sides encased in recycled aluminum, while the front is covered by glass. Some visible features on the tablet’s exterior, when held upright, include four speakers, two at the top and two at the bottom, volume buttons on the upper right, and the power button at the top, towards the right.

The locations of the cameras remain the same, while there are three microphones at the top and one at the center of the tablet’s left side. Aside from the volume buttons, the right side has the magnetic connector towards the center and the nano-SIM tray further down.

Lastly, at the bottom is the thunderbolt port, and at the back is the Apple logo and the three smart connector dots. Overall, the iPad Pro 11-inch has a practical design that makes it easy to use.

The 2022 iPad Pro has an 11-inch IPS LED display with a 2388 x 1668 pixel resolution at 264 pixels per inch, just like the 2021 version. The screen has a True Tone display that adjusts screen brightness and content color to surrounding lights. It also has a fingerprint-resistant coating to guarantee the clarity of the content displayed.

Moreover, the tablet’s ProMotion technology enables a 120Hz refresh rate while the display has a maximum brightness of 600 nits. Altogether, the display offers features that will appease casual users, video editors, and designers, alike.

Overall, the 2022 iPad Pro screen provides slightly better functionality than previous models. The anti-reflective coating, which adequately prevents glare, and the 600 nits in maximum brightness make the iPad Pro ideal for working outdoors during the day. However, the fingerprint-resistant oleophobic coating, which was not in the earlier models, is not as good as advertised.

The chip also features a 16-core neural engine capable of performing 40% more operations per second than the neural engine in the M1. After testing the Apple M2 chip’s output, and comparing it with the M1 chip’s production in the 2021 iPad Pro, we were pleased to find that the difference in performance between the two chips was as advertised by Apple, if not better.

The substantial amount of RAM guarantees the device does not encounter issues like freezing when performing multiple functions simultaneously. 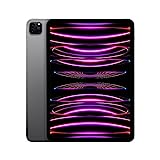 For people who buy the iPad Pro with storage above 128 GB, they can enjoy the ProRes recording feature that allows users to record 4K at 30 fps. However, those with 128 GB devices will have to make do with 1080p ProRes at 30fps as a means of conserving space, as 4K videos are large files that can fill up the 128 GB storage quickly.

In addition, there is a 12 MP ultra-wide front-facing camera on the tablet that offers 122° of view. The 2022 iPad Pro 11-inch is an ideal device for videographers and video editors as it provides an opportunity to experiment while creating footage.

The 2022 iPad Pro has a built-in 28.65-watt-hour lithium-polymer battery that Apple claims can last up to 10 hours on a single charge. Even though testing showed that it does not reach precisely 10 hours while browsing the net or watching videos, it does get close to 8-9 hours.

That is enough to allow buyers to use the device all day at work and recharge it once they get back home. The standard 20W charger that comes with the iPad takes about 3 hours to charge the device, which is convenient. You can also buy the 30W charger that enables fast charging in less than 3 hours if you constantly need the iPad.

Apple has also improved some connectivity features in the 2022 iPad Pro 11-inch. They include upgrading the Bluetooth from Bluetooth 5.0 to Bluetooth 5.3. The new device also supports Wi-Fi 6E and 5G in the Wi-Fi + Cellular models.

That means those living in areas with access to 5G networks will enjoy the benefits of 5G technology, like faster speeds and improved gaming experiences. Moreover, the Wi-Fi 6E will facilitate faster and stronger Wi-fi connections in areas with supporting infrastructure. Similarly, those with devices supporting Bluetooth 5.3 will enjoy stronger connections between devices.

For those who find it challenging to type on an iPad, you can buy the Magic Keyboard. The iPad Pro 11-inch has a magnetic connector that attaches the tablet to the keyboard, thus allowing a seamless transition from on-screen to keyboard typing.

The keyboard is beneficial because it will make working feel more natural and negates the need to constantly wipe smudges on the iPad’s screen caused by your fingertips.

You can also buy a folio made from polyurethane to protect your iPad against damage. A folio, like the Magic Keyboard, attaches to the iPad using a magnetic connector.

It is ideal as it creates a stand that makes it easier to view, type, and read content on the tablet. Folios are also available in a variety of colors which help improve the dull appearance of the iPad Pro.

Apple introduced the Hover Mode in the iPad Pro 11-inch, whereby you can hover an Apple Pencil above your tablet’s display, and it will indicate on the screen where the pencil will hit the display. Apple added the feature to improve the accuracy and precision with which users sketch or illustrate while using the tablet.

The Apple Pencil can hover up to 12mm above the display and give an accurate indication of its position. Therefore, the Apple Pencil is worth considering as it helps make work easier.

…You are a content creator. The tablet has adequate space to store your content, while its cameras can record 4K and 1080p videos. That means you will be able to deliver high-quality content to your audience.

Moreover, the Apple pencil hover feature makes using the tablet easier for illustrators and sketch artists. The iPad Pro is also ideal for people who work long hours at the office as it has reliable battery life. Thus, it will run the entire day without issues. It’s also light, so you don’t have to worry about carrying it around.

…You do not need the high performance offered by the Apple M2 chip. Apple designed the device to handle heavy workloads without worrying about the device freezing. Therefore, if you intend to primarily use the tablet for entertainment, like keeping up with your social media accounts or watching YouTube content, then avoid buying the iPad Pro.

Is the iPad Pro worth buying?

Yes. If you do not own a recent tablet like the 2021 iPad Pro, then you should consider buying the 2022 iPad Pro. It has slight upgrades that will enhance your interaction with technology.

What is the lifespan of an iPad Pro 11-Inch?

If you properly maintain your device, it should last up to 5 years without needing replacement.

Should I turn off my iPad Pro every night?

Unless you do not intend to use your iPad Pro for a prolonged period, there is no need to turn off your tablet every night.

When was the first iPad Pro released?

Apple released the first generation of the iPad Pro in the fourth quarter of 2015.

What are the differences between the iPad Pro and other iPads?

The iPad Pro has substantially better features than the iPad Air. For instance, it has a better display than the others in terms of refresh rate and peak brightness.

What factors cause an iPad’s battery to drain quickly?

Some factors that may be draining your tablet’s battery include having too many background applications open simultaneously. It could also be because you have set the iPad’s brightness too high or you are running old software that needs upgrading.

Duke M is a freelance writer with an insatiable interest in electric vehicles, video and virtual reality games, personal tech, cybersecurity, and cryptocurrencies. He also has a newly-found interest in science fiction and the history of technology. He believes understanding past technology-related events is integral to appreciating current and future innovation efforts. When not writing or obsessing over new tech, Duke enjoys quiet strolls with his poodle pet or watching movies with his friends. Follow him on twitter @Duke_Writes.