The History of Harvard Mark 1: A Complete Guide 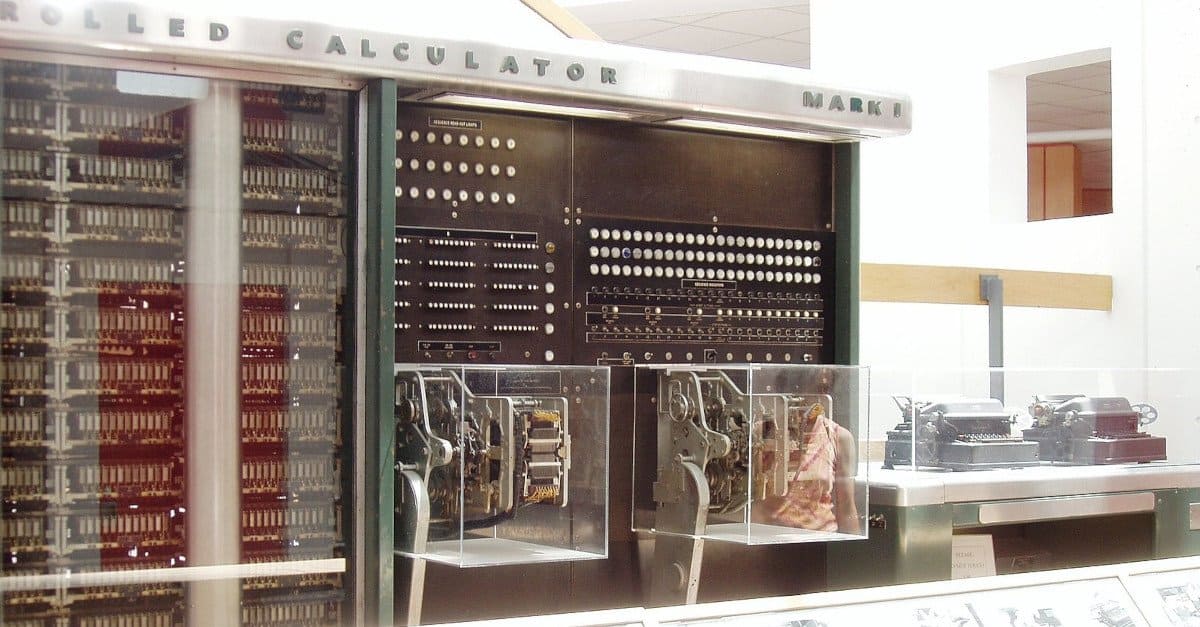 4 Facts about the Harvard Mark 1

The History of Harvard Mark 1: What to know

The Harvard Mark 1, also known as the IBM Automatic Sequence Controlled Calculator (ASCC), was an early electromechanical computer designed by Howard Aiken (see the biography of Howard Aiken) and built by IBM in 1944 at their Endicott labs in New York. Although not the first working computer, the machine was the first to automate the execution of complex calculations, making it a significant step forward for computing. Aiken was inspired to design and build the machine in part by the Difference Engine and Analytical Engine of Charles Babbage (see the biography of Charles Babbage).

The Mark 1 was used primarily to calculate and print mathematical tables, a type of table showing the results of various mathematical operations. It was also a part of the effort to develop nuclear weaponry and was used by John von Neumann (see the biography of John von Neumann) to determine whether implosion was a viable means of detonating the earliest atomic bombs. Although slower than many other computers of its time, the Mark 1’s reliability meant that it saw use until 1959, when it was disassembled.

Harvard Mark 1 – How It Worked

Unlike electronic computers of the time, which used vacuum-tube arrays to solve calculations and perform operations, the Mark 1 was built using physical components derived from IBM’s existing punched card devices. The Mark 1’s operators fed sheets or rolls of paper which had been perforated by programmers into it, and the machine read its instructions by following the punched holes.

Mechanically, the Mark 1 was designed around a rotating switch connected to a drive shaft. These switches stored digits, timing, and other information and were connected into groups of twenty-four called an ‘accumulator.’ As the shaft rotated, clutches triggered the accumulators when they needed to perform an operation or transfer a number to a different accumulator. In addition to the tape, the Mark 1 required cables to be plugged into boards along its length.

Advantages and Disadvantages of the Harvard Mark 1

One of the Mark 1’s biggest disadvantages was that, compared to electronic computers, it was significantly slower. This made completing calculations a time-consuming task. Other disadvantages were its loud noise while working, its immense size, and the need for large amounts of energy. Because the Mark 1 was programmed using tape, there was also no way to jump around in the program. Instead, programmers had to stick to relatively simple sets of instructions that could be read in a linear fashion.

The Mark 1’s main advantages were that it could be programmed to complete different tasks and the fact that its parts were made to reliable standards by IBM engineers. These advantages outweighed its disadvantages, especially since most of its less positive aspects were shared by other early computers, and were responsible for its continued use through to 1959, a full 15 years after its construction. After several years, the Mark 1 was modified slightly by the addition of a secondary mechanism that allowed programs to call looped sets of instructions at various points during the main program sequence, speeding up operations and allowing for more complexity.

Although the Mark 1 wasn’t the first working computer to be designed or built, it was important in the history of computer science because it was the first that could be used to solve any arbitrary mathematical problem. This flexibility gave the Mark 1 considerable advantages over its predecessors and arguably make it the first working example of a programmable computer. Aiken turned the success of the Mark 1 and its successors into a career that helped move the creation and use of computing devices from a theoretical concept to a practical idea with commercial, industrial, and military applications.

When was the Harvard Mark 1 invented?

Howard Aiken (see the biography of Howard Aiken) initially designed the Mark 1 in 1937 while still a graduate student at Harvard. Aiken continued to refine his invention as he sought a company interested in building the device and the final version of the Mark 1 was not finished until IBM approved the project in February of 1939. The device was built at IBM’s Endicott Labs in New York over the next three years and was constructed at Harvard in 1944.

What is the Harvard Mark 1?

The Harvard Mark 1 was an early electromechanical computer. It used punched tape and a series of switches and drive shafts to automatically perform calculations and was also known as the IBM Automatic Sequence Controlled Calculator (ASCC).

Is the Harvard Mark 1 the same as the IBM Automatic Sequence Controlled Calculator (ASCC)?

Yes, the two inventions are the same. The official name for the project at IBM was the Automatic Sequence Controlled Calculator (ASCC). However, after inventor Howard Aiken (see the biography of Howard Aiken) claimed all credit for the machine’s creation in a press release, his relationship with IBM fell apart and it came to be known as the Harvard Mark 1.

How was the Harvard Mark 1 programmed?

The Mark 1 was programmed using punched tape and punched cards, a typical method of programming early computers. Programmers would create their programs by punching holes in cards or paper tape and then feed these into the device, which would follow the instructions and print out the correct calculations. Punched tape techniques led to terminology still in use today, such as a ‘loop’ of code (a piece of punched tape that formed a physical loop and fed constantly into the machine) and the term ‘patch’ to represent a fix for buggy code (in the case of punched tape, literal patches of paper over incorrectly made holes).

Who made the Harvard Mark 1?

The inventor of the Harvard Mark 1 was Howard Aiken (see the biography of Howard Aiken). However, many other engineers and designers at IBM’s Endicott Labs worked on the creation of the machine itself, among them James W Bryce, Clair Lake, and Frank Hamilton. Harvard graduate student Robert Campbell also helped in the machine’s construction, supervising the final stages. The frame for the finished device was designed by Norman Bel Geddes.

What was the Harvard Mark 1 capable of?

The Mark 1 could calculate 3 sets of addition or subtraction per second. Multiplication and division took longer, while more complicated functions required more than a minute. The number of switches and relays in the Mark 1 gave it the capacity to store more than 70 23-digit decimal numbers.

What was the Harvard Mark 1 used for?

The Mark 1’s primary function was to calculate and print sets of numerical tables, lists of solutions to various mathematical operations. The Mark 1 was used almost exclusively by the US Navy. For instance, the Mark 1’s tables were used to assist in the design of various equipment, including surveillance cameras and radars. One other long-running project was the use of the Mark 1 to compute Bessel Functions, solutions to a specific type of differential equation with many applications. The computer’s most controversial role is probably its use by John von Neumann (see the biography of John von Neumann) in calculating detonation methods for nuclear warheads as part of the Manhattan Project.

Why was the Harvard Mark 1 important to computer development?

The Mark 1 was important to the development of computers because it represented the first time a machine could automatically calculate any arbitrary set of numbers. It also represented an evolution of punched card machines from single-use to multi-purpose devices.

Why was the Mark I not considered a computer?

The first recorded use of the word “computer” to refer to a machine that performs calculations is from 1945, a year after the date the Mark 1 was completed. Prior to that date, the word referred to people who carried out complex calculations as part of a team. This is the reason why IBM’s name for the project was the Automatic Sequence Controlled Calculator (ASCC). Today, the Mark 1 is understood as an early example of a computer.

Was the Harvard Mark 1 the first computer?

Setting aside the semantics of the word “computer,” the Harvard Mark 1 was not the first computer. A number of other working computers had been created by 1944, including Konrad Zuse’s (see the biography of Konrad Zuse) Z1 computer in 1939 and the Atanasoff-Berry Computer (ABC) in 1942 (see the biography of John Atanasoff and Clifford Berry), the latter of which is often considered the first automatic electronic digital computer.

What happened to the Harvard Mark 1?

The Mark 1 was superseded a few years after its completion by the Harvard Mark 2 in 1948. This computer was also designed by Aiken in conjunction with Mark 1 programmer Grace Hopper. However, despite the fact that it was slower than vacuum-tube-based machines from the same time period, the Mark 1’s use of electromechanical components made it more reliable. For this reason, Harvard continued to use the Mark 1 to run calculations until 1959, when it was decommissioned and dismantled. Approximately half of the Mark 1 remains at Harvard, where it is now housed in the Science and Engineering Complex. The remainder is owned by IBM and the Smithsonian Institution.

Who programmed the Harvard Mark 1?

The main programmers for the Harvard Mark 1 were Richard Milton Bloch, Robert Campbell, and Grace Hopper. In addition, there were a number of IBM engineers responsible for the machine’s actual operation.