Charles Rosen with Shakey in 1983 Shakey the Robot Shakey, the first mobile robot with the ability to perceive and reason about […] 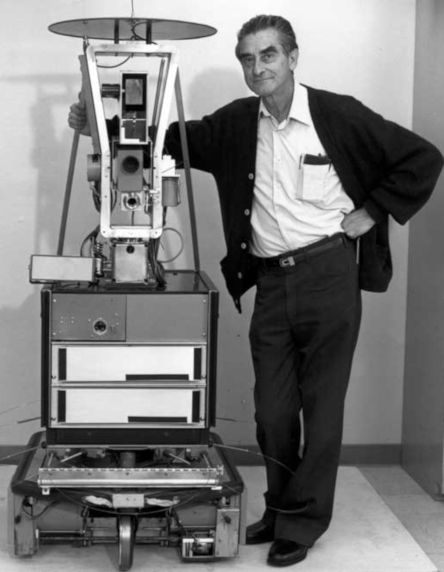 Charles Rosen with Shakey in 1983

Shakey, the first mobile robot with the ability to perceive and reason about its surroundings, was created in late 1960s in Stanford Research Institute (SRI) by a group of engineers, managed by Charles Rosen, as the project was funded by the Defense Advanced Research Projects Agency (DARPA).

In November 1963, Charles Rosen, who had founded the Machine Learning Group at SRI, dreamed up the world’s first mobile automaton. In the next year, Rosen proposed building a robot that could think for itself, but his idea was met with skepticism by many in the nascent AI field. In the same year, Rosen applied for funding to DARPA, which grants funds for the development of emerging technologies. It took Rosen two years to get the funding (DARPA granted the researchers $750000 – more than $5 million in today’s money), and it took six more years, until 1972, before engineers at SRI’s AI Center finished building Shakey. 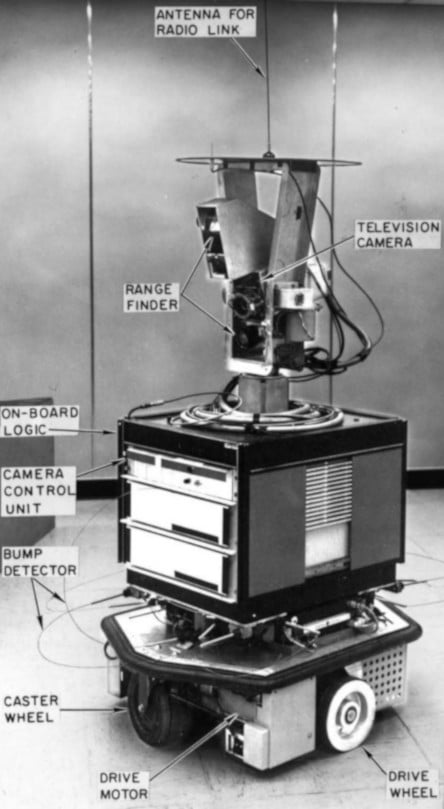 The main modules of Shakey

Shakey was a little less than two meters tall, and had three sections. At the bottom was a wheeled platform (two stepping motors, one connected to each of the side-mounted drive wheels) that gave the robot its mobility, and collision detection sensors. Atop that were what looked like three slide-in units in a rack. Those held robot’s camera-control unit and the on-board logic. Stacked on the uppermost unit was a range finder and a TV camera and a radio antenna protruding from the top.

A radio link connected Shakey to a computer, which could process the incoming data, and send commands to the circuits that controlled the robot’s motors. Initially, a SDS (Scientific Data Systems) 940 computer was used. Around 1969, a more powerful DEC PDP-10 replaced the SDS 940. The PDP-10 used a large magnetic drum memory (with the size of a refrigerator, held some 1 megabyte) for swapping time-shared jobs in and out of working core memory.

Shakey used the Lisp programming language, as well as FORTRAN, and responded to simple English-language commands. A command to roll 2.1 feet would look like this:
SHAKEY = (ROLL 2.1)
Other commands included TILT, PAN, but there were also GOTO statements (which instead of jumping to a new position in the code) would actually cause the Shakey to go to to a new position in the real world.
SHAKEY = (GOTO D4)
Which is more important, Shakey itself would first plan out the route it was going to take, even plotting a course around obstacles. And it could perform other useful tasks, like moving boxes.
SHAKEY = (PUSH BOX1 = (14.1, 22.7)) 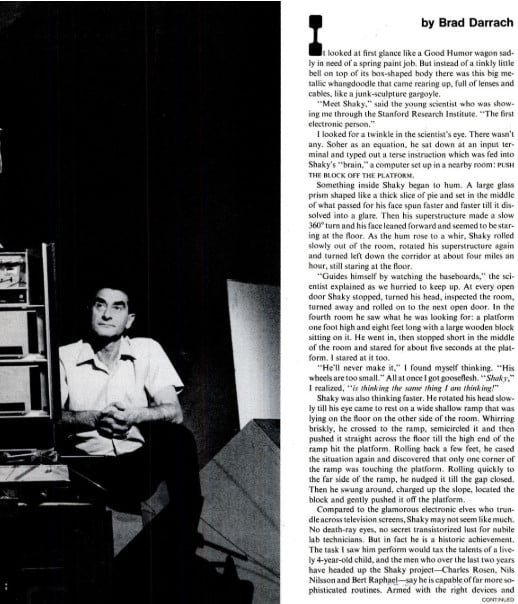