October has been packed full of new tech releases, as usual. Coming off the heels of Apple’s iPhone 14 unveil, Google’s Pixel and Microsoft’s Surface events were equally impressive. October is the perfect time to show off the latest devices before the holiday season begins. However, the last few years have been a bit sluggish because of COVID.

The biggest two events of October are Google’s unveiling of their newest Pixel devices as well as Microsoft’s latest Surface computers. Both events were packed full of new features with upgrades all around. But one of the most notable what was Google’s expansion of the pixel line, including a watch and tablet.

Google is an often overlooked manufacturer in the Android phone market. Although their devices are stunning and powerful, many consumers forget about them because of the more well-known Samsung Galaxy phones. But Google is looking to make a stand and get consumers’ attention expanding far beyond just phones.

Google’s Pixel lineup has focused on innovation and AI since the beginning. One of the unique aspects of Google making physical devices is that they can leverage their own capabilities. For instance, the camera technology on Pixel phones allows users to remove objects in the background or even enlarge an image after it is captured.

These are impressive feats, but they are also indicative of the current state of technological advancements. While companies like Apple and Samsung appear to be at a standstill with innovation, Google finds new ways to improve its products. Now, let’s take an in-depth look at all the new products Google unveiled at the event.

First off is the Pixel 7 with its flat aluminum finish; you’ll quickly notice that the dual cameras pop off the back of the phone on a horizontal stripe. The protrusion allows the phone to have a larger camera sensor. The front-facing camera is also unique, using a hole in the screen for the camera, much like the iPhone 14 Pro.

Powering the new Pixel 7 is a Google Tensor 2 chip which is designed by Google to meet the demands of this new phone. The screen is 6.3-inches and is about 25% brighter than its predecessor. The photo features of the Pixel 7 are very impressive as it has a 50 Megapixel camera and a 12 MP ultrawide camera built in. 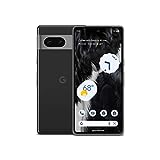 The Pixel 7 Pro looks pretty similar to the standard Pixel 7, with the exception of an extra camera on the rear. The display is a little bigger, coming in at 6.7-inches, and is QHD+ with up to 120Hz refresh rate. It is also available in Hazel rather than Lemongrass; this is in addition to Obsidian and Snow.

The Pixel 7 Pro uses the Google Tensor 2 chip as well. The camera is the most prominent feature of the Pixel 7, as it includes a telephoto lens. This camera sits alongside the standard and wide-screen cameras. The Tensor 2 processor makes these cameras even better by using machine learning to help get the best photos possible.

One of the most exciting announcements was Google’s Pixel Watch. It has a traditional round design which appears to not have a bezel. They are able to achieve this look with the rounded edges that blend naturally into the aluminum case. One standout feature of the device is that it works with Fitbit for fitness tracking.

Of course, the Pixel Watch also works with many other apps that you can add to the watch. It also features other health-tracking abilities, such as a heart rate monitor. Pixel Watch also has emergency calling capabilities, and fall detection is also coming soon. 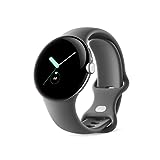 Last but not least is the Pixel Tablet, which Google saved till the end since it won’t be available for a while. A tablet device makes sense, and it is actually a little strange that it took this long for one. It works very similarly to Pixel phones and also uses an Android-based operating system.

The Pixel Tablet also uses the Tensor G2 processor. But the nicest feature of the tablet is its speaker dock which is unlike any other tablet accessory on the market. The dock lets you use your tablet as an all-in-one smart device either at home or on the go.

Microsoft’s Surface lineup is now ten years old, but today, it features a robust range of tablets and laptops to meet everyone’s needs. From high-end tablets to everyday laptops, the Surface lineup has expanded to meet a wider range of needs. In addition, new accessories were a prominent feature of the event, as Microsoft unveiled new adaptive accessories.

The Surface Pro 9 and Surface Laptop 5 stole the show, getting the bulk of the attention. But Microsoft also unveiled the Surface Studio 2+, which is an all-in-one touchscreen desktop. However, its $4,500 price tag is enough to scare away most buyers. One problem plaguing the Surface lineup is a mishmash of different product designs that come and go.

This makes it incredibly difficult and confusing to win over average consumers. There is also a bit of confusion as to what Surface devices are. The answer lies somewhere between a tablet and a laptop, but the introduction of an all-in-one computer makes things even more confusing.

The Surface Laptop 5 is a traditional laptop with a built-in keyboard. Right off the bat, the fifth generation adds a new color to its lineup, sage. But on to power, the laptop now runs on Intel’s Evo platform, which is said to run 50% faster than the Surface Laptop 4.

The new laptop also uses Thunderbolt 4 to transfer data and connect devices. It also has an optimized battery that lasts up to 18 hours and charges within 30 minutes. The Surface Laptop 5 also has Dolby Vision and Dolby Atmos, making it great for watching movies. 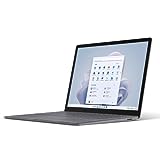 As for the Surface Pro 9, it further refines the already great Surface Pro 8 and adds two new colors, Sapphire and Forest. It also has Thunderbolt 4 and USB-C for connectivity, and it can even output in 4K. There is even a cellular option with the first 5G service on a Surface tablet. One of the greatest things, however, is speakers integrated into the screen that actually points toward the listener instead of on the back.

In addition to the Intel Evo processor, you can also get the Surface Pro 5 with an SQ3 processor from Qualcomm. The optional keyboard even comes with the Slim Pen, which fits neatly on the keyboard. Surface tablets are great because they work intuitively with the keyboard and can seamlessly transition between tablet and laptop modes. 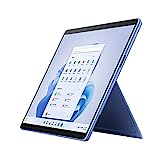 Both Google’s Pixel event and Microsoft’s Surface event showed off some great new tech. But each was a bit different. Microsoft was clearly targeting more of a business audience, while Google still tries to find an audience for their Pixel devices. Oddly enough, both product lines struggle to find the mass appeal of their biggest competitor, Apple.

Google’s Pixel devices and Microsoft’s Surface tablet are excellent in their own right, but they are trying to break into a market that is arguably over-saturated. With that said, competition in the market is good for consumers, and hopefully, these two tech behemoths continue pushing the boundaries.

Does Microsoft have a new phone?

Microsoft does have a phone again, but the Surface Duo runs on Android rather than Windows.

Is there a new Surface Go?

Microsoft did not make any announcements regarding the cheaper Surface Go tablets.

Does Google still have earbuds?

Google does have earbuds known as Pixel Buds, which are very competitive in quality with Airpods.

Is the new Pixel Tablet a Google Home device?

The Pixel Tablet is technically a Pixel device rather than a Google Home device. However, Google did announce that you will be able to use it to control your home.

When will the Pixel tablet be available for purchase?

The release date for the Pixel Tablet was pretty vague, with just a 2023 release timeframe. However, it seems like a late Spring or early Summer release is likely.