Have you been plagued by network connectivity or speed issues at home? A mesh WiFi network might just be what you need to fix your network problems. Not only does the device connect to multiple devices, but it extends the normal range of your WiFi.

One company that has been doing well is Eero. In the last few years, they have kept up with the ever-changing networking field, especially the latest change, WiFi 6. While the Eero and Eero Pro focus on retaining high-speed internet and stable connection, the Eero targets affordability. So, what sets them apart? Read on to learn more.

Eero vs. Eero Pro: Side By Side Comparison 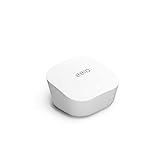 While the standard Eero system is no slouch, the Pro system takes speed to a new level. One of the most significant advantages of the Pro is the third 5GHz band available for the points to communicate at full speeds without sacrificing speed to user devices. But, of course, the speed you receive does depend on the speed you are getting from your internet provider.

The standard Eero offers speeds up to 400Mbps on the 2.4GHz band and 866.6Mbps at 5GHz. Because the standard version does have to share the 5GHz band with its other connection points, the speed on the 5GHz will be cut in half. However, this speed is still plenty for most people who can comfortably stream 4K media.

Suppose you need even more speed than that. The Eero Pro will get you there. Because it does not need to share the 5GHz band with the connection points, you will be able to get the full 866.6Mbps. While you will not always get that speed in reality, Eero recommends looking at the Pro version if your internet speed is over 550Mbps

One of the most considerable advantages that come along with any Eero product is the software. Whether you have the standard or pro version, the software experience should be mostly the same. Eero software should update automatically when there is a new version released. If you do happen to go with either of these, make sure to download the Eero app for iOs or Android before you disconnect the old system, it will make the installation process much more manageable.

The Eero Pro again has a slight advantage in this category. It has a range of 1,750 sq ft, while the Eero standard covers 1,500 sq ft. Keep in mind this is the range of one pod. If you want to cover a larger area, Eero recommends going with one of their 3 packs.

The Eero and the Eero Pro have two gigabit RJ45 Ethernet ports if you need a wired connection. Keeping your wired devices connected will be easier than ever since you can plug into the nearest router.

How the mesh wifi system works

Traditionally, if you used one router to cover your entire home and needed to boost your WiFi signal to expand coverage, you would typically get a range extender. However, setting up extenders is quite tricky. That’s not to mention they do not extend the full power of the router.

Enter the mesh network. Mesh wifi extends the router‘s range while retaining the same power and connectivity level as the original router. This makes it much simpler to set up and smoother to use.

Eero vs. Eero Pro: Which is Better

Eero is undoubtedly one of your best Mesh WiFi systems, regardless of which version you are looking at. Unless you are looking for top-of-the-line performance or coverage that’s more than 1,750 sq ft with one pod, the Eero standard will be more than enough speed and coverage. A 3-pack of the standard costs about $400 less than a 3-pack of the Eero Pro. However, if you are consistently uploading and downloading massive files and need to create a mesh network to boost your reach, the Eero Pro might be worth the extra investment for the tri-band speed.

Do I really need Eero Pro?

If you have a smaller home or an Internet connection under 400 Mbps, one or two eero units are all you need. However, if you are in a big house and need a faster Internet connection, stepping up to the eero Pro might be worth the extra $400.

Does eero slow down Wi-Fi?

You may have heard this online, but setting up an eero mesh WiFi most of the time does not slow down your speed. You can use their software and test the speed of each pod, then move them to different places around the house to find the best place for the most optimal speed.

How far apart can eeros be?

While one eero standard pod covers up to 1,500 sq ft and eero pro covers 1,750 sq ft, if you are using more than one eero, place the pods 50 feet away from each other to get a sufficient amount of overlap.

Does Eero replace the router?

No, it doesn’t replace your home’s modem but the router. It will plug into an existing cable or DSL modem. If you have a combination, you’ll use the model as usual and disable the routing function by toggling off the bridge mode.