Amazon has produced dozens of Echo-branded devices over the years from the simple Echo Dot to the battery-powered Echo Tap and the popular Show collection. While the 10” Show has remained popular, the Echo Show 5 and 8 are the two that come up the most often in debates.

The size of the display is an obvious difference between these devices, but it’s not the only one. If you’ve been on the fence between the two, you’ve come to the right place. In this guide, we’re going to take a closer look at the Echo Show 5 and its larger sibling to see how far the differences go beneath the display when you go under the hood.

The original Echo Show 5 launched 5 months before the larger Echo Show 8 back in 2019. Both models have seen a second generation since that time, and still remain the smallest version of the Show smart speaker from Amazon.

There are some similarities between the models, although the differences begin with the design itself.

While some companies dramatically change the look of their lineups as sizes increase, Amazon has done an excellent job of keeping things uniform in the Echo Show family. You won’t notice a significant change in design from one generation to the next or with smaller sizes like the Echo Show 5 and Echo Show 8.

The latest models both have relatively thick bezels and a row of controls across the top including a switch for privacy. They have a slanted design, with the Echo Show 5 being the smaller of the two with a length of 5.8 inches. The larger Echo Show 8 is 7.9 inches long and an inch wider with a weight of 36.6 ounces compared to the 5 at 14.5 ounces.

Neither model will take up much space, although the Echo Show 5 is better suited for smaller areas including nightstands. It also comes in an extra color with Deep Sea Blue whereas the Echo Show 8 is only available in Charcoal and Glacier White.

Amazon didn’t change much with display technology when moving from the first to the second generations of the Echo Show 5 and 8. The first Echo Show had a 5.5-inch panel with a resolution of 960 x 480p, and the 2nd gen Echo Show 5 has the same touchscreen display.

With the Echo Show 8, the first and second generations have an 8-inch display with a resolution of 1,280 x 800p. The touchscreens are just as responsive on the new models as they were on the originals considering all four have a MediaTek MT 8163 processor under the hood.

Audio from the Echo Show 5 and Show 8 is clear and they can handle a variety of musical tastes. The Echo Show 8 has larger speakers with dual 2-inch 10W speakers. On the smaller Show 5, there is only one 4W speaker 1.7 inches in diameter.

The Echo Show 8 is the winner whether you choose the original or 2nd generation Echo Show 8. Most users will notice an uptick in resolution and you can certainly tell a difference in the sound systems even if it doesn’t have a woofer like the Echo Show 10.

The Echo Show smart speakers are a great way to check a recipe in the kitchen or catch up on YouTube, but they are also popular streaming devices. The speakers and camera allow you to keep in touch with friends and family through video chats, one of the many selling points of the product line.

When you wanted to snap a quick selfie or hop on a chat, the first generation Echo Show 5 and 8 were capable but limited. Both of those smart displays only had 1MP cameras but received an upgrade with the new model in 2021.

A number of new features were added to the second generation of Echo Show devices that weren’t available the first time around. Newer models have a home monitoring function that works through Alexa in case you want to take a peek at things while you’re away.

You can also set motion routines through Alexa using the Echo Show. This allows the speaker to perform certain functions like turning off lights if you leave a room. You can also expand that through smart plugs and other gadgets throughout your home.

Both devices largely have the same features, although the Echo Show 8 can do something the smaller model can’t. The large display and improved camera use auto-framing allowing users to move around during calls and still stay in the frame. You can’t do that with the Echo Show 5-–you have to stay stationary.

Since the first Echo Show hit Amazon in 2017, the company has remained competitive with pricing regardless of the competition. The Show lineup is cheaper than similar devices from Google, Meta, and even third-party manufacturers with budget-friendly smart speakers.

While there are only a few inches differences in size between the Echo Show 5 and Echo Show 8, there is a large price difference.

The Echo Show 8 is priced at $79.99 compared to the Echo Show 5 price of $39.99. That’s a $40 price swing on devices that can do the same thing aside from auto-tracking on the Echo Show 8. The bump in resolution, the larger camera, and louder speakers justify the difference, however.

You really can’t go wrong with either of these smart speakers if you’re looking for an affordable system for video calls or are already invested in the Echo ecosystem. With that in mind, the Echo Show 8 is the best deal if you plan to use the camera or simply want a larger display to work with.

The same apps are available on both devices, but videos and calls are clearer and sound better on the Echo Show 8. It’s only slightly larger than the smaller edition, and the price difference is minimal considering the betters specifications.

The older generations are a cheaper alternative if you’re not interested in an updated camera or new routines. If you’re torn between the Portal and Echo Show, we have that covered as well. 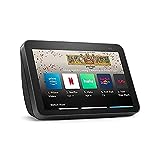 Do the Echo Show 5 and Echo Show 8 have a Zigbee hub?

No, the Hub is only included as part of second and third-generation Echo 10.

How do you add photos to the Echo Show?

You can do this a number of ways including through the Amazon Photos app.

Is the Echo Show 5 or 8 water-resistant?

No, so you’ll need to be cautious using one in a kitchen around a sink.

Can you buy a battery base for Echo Show speakers?

Yes, there are a variety of battery stands that can add portability to the Echo Show 5 and Show 8.